Kell Brook Smiles: I Showed Everyone Golovkin Can Be Beaten!

Back in 2016, Brook moved up by two full weight division, 13 pounds, to challenge Golovkin for his world titles. Brook gave a good account of himself in the fight, before he sustained a fractured orbital bone and was stopped in the fifth round.

"He was at his peak which shows you the man I am - a welterweight jumping up to middleweight," Brook told Sky Sports. "Golovkin was the most feared man on the planet at the time but Kell Brook just jumped straight in with him. Do I regret it now? Maybe, with what happened in the fight.

"But you can't think like that, at the time. The opportunity was there for me to shock the world and I went for it. It didn't go my way but I got good credit. I showed a blueprint of how to beat him. I showed everyone he can be beaten. And he has been beaten since. He isn't the same fighter, I don't believe." 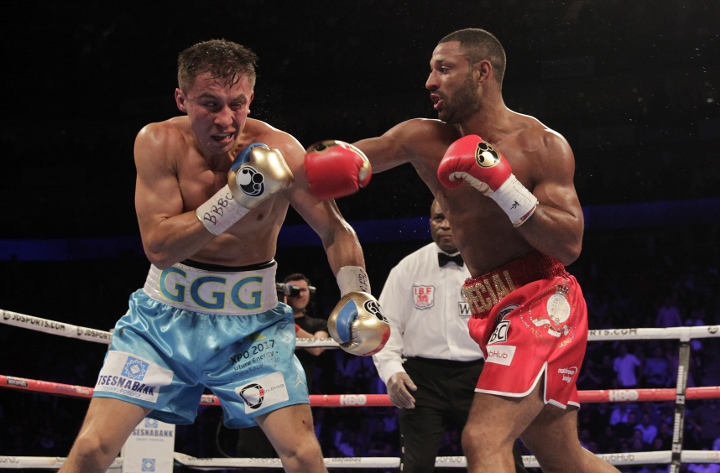 Golovkin is trying to rebuild his career after suffering his first career defeat in September 2018 to Canelo Alvarez.

Since then, Golovkin has replaced longtime trainer Abel Sanchez with Johnathon Banks. They worked together for the first time back in June, when Golovkin blasted out Steve Rolls.

On Saturday night at Madison Square Garden in New York City, Golovkin will face once-beaten Sergiy Derevyanchenko for the vacant IBF, IBO middleweight titles. A solid win over Derevyanchenko would bring Golovkin's status back to the top of his class, since Canelo is heading all the way up to the light heavyweight limit of 175-pounds to challenge Sergey Kovalev.

Kell the only thing you showed was it's not smart to enter the ring too soon after having your eye socket broken.

Did Brook beat GGG in a rematch that I missed?

Had his life saved by the white flag. Hahaha

Kell Brook we already new that GGG could be beaten.but you didn't do ****,but get your face busted up.ggg wasn't worried about you.because he new you couldn't punch,and where easy work,and a payday.so please don't talk ****.your a bum.

I'm a Brook fan, but that fight effectively ended his career.