A potential rematch means more to Danny Garcia than Keith Thurman because Garcia wants to avenge his first professional loss.

Garcia still would rather fight Manny Pacquiao or Errol Spence Jr. whenever the boxing business resumes, but a rematch with Thurman remains one of the biggest fights available for the former WBC welterweight champion. Thurman is interested in it, too.

“I heard Danny and his father are always interested in the rematch,” Thurman told BoxingScene.com. “To them, it’s a grudge match. They believe that they can get me, and they would like to redeem themselves. So, that’s always a fun fight, going back in the ring with Danny Garcia.” 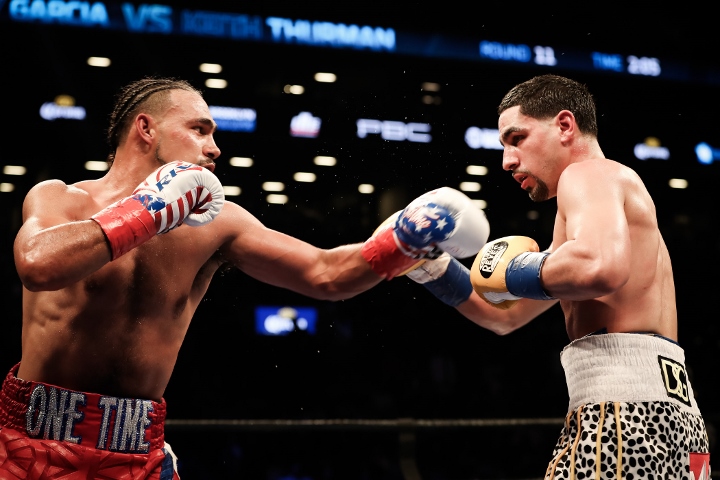 The 31-year-old Thurman is confident he can defeat Garcia more convincingly in a rematch.

“I believe that I can do more damage to Danny Garcia,” Thurman said in reference to a second fight. “I think I can out-box him nicely. And I just don’t think that he’s ever really changed. I don’t think he’s gonna utilize his jab any more than he has done in the past. I see him being a little predictable. He’s just gonna want what he’s gonna want, which is the big punch. I loved watching him miss all day the first time.”

Thurman retained his WBA welterweight title and won the WBC belt from Garcia. CBS aired Thurman-Garcia, which drew a peak audience of 5,100,000 and an average viewership of 3,740,000 on free TV.

Thurman (29-1, 22 KOs, 1 NC), of Clearwater, Florida, is still recovering from surgery on his left hand, a procedure he underwent September 4. He suffered his first defeat in his last fight, a 12-round split decision to the Philippines’ Pacquiao (62-7-2, 39 KOs) on July 20 at MGM Grand Garden Arena in Las Vegas.

“Prior to Thurman-Pacquiao, Thurman-Garcia was the biggest fight of my career,” Thurman said. “It was the highlight of my career, still one of the highlights of my career, because that’s when I became the unified champion of the welterweight division. So, it was just a great fight, a great show out at the Barclays [Center]. We just get so much love out there in New York. I think the rematch could possibly be back in New York. It possibly could be a Vegas fight. But I like the fight.

“I think it’s a great next fight. I’d be really cool with that. Of course, we’d have to see what else is on the table. I think it’d be worthy of a title eliminator, thus the winner gets a champion next. With all that said, I’m gung-ho about signing on the dotted line. Believe that.”

[QUOTE=daggum;20504926]2 of those guys were undefeated young lions. brandon rios was a guy pac fought after getting knocked out cold. do you know what context is? floyd fought judah on ppv and judah was coming off a loss to a…

[QUOTE=daggum;20504926]2 of those guys were undefeated young lions. brandon rios was a guy pac fought after getting knocked out cold. do you know what context is? floyd fought judah on ppv and judah was coming off a loss to a…

[quote=ironchinhagler;20505894]cant argue with that - mikey is safety 1st dull as hell!! But so is broner against top competition- very reluctant to let his hands go and just covers up for a decision loss!!![/quote] bronr vs maidana was fun to…

[QUOTE=HaymonzPlanet;20505669]all mikey fights are forgettable... Agreed[/QUOTE]cant argue with that - Mikey is safety 1st dull as hell!! But so is Broner against top competition- very reluctant to let his hands go and just covers up for a decision loss!!!

[QUOTE=Get em up;20505585]I agree Thurman needs that kind of fight too but he has to win to stay relevant and I dont think he can beat the top guys in the division any more and if he fights them and…