Keith Thurman Vows: This Will Be Manny Pacquaio's Last Fight

It’s been more than two years since Keith Thurman has proven to belong at the very top of the welterweight division.

His adopted theme music suggests a mindset intent on not only reaffirming his place, but taking out a living legend in the process.

“We ready…’cause we ready… for Pacquiao,” Thurman chanted ahead of his opening remarks for Tuesday’s press conference in New York City to announce his forthcoming showdown with eight-division champion Manny Pacquiao. 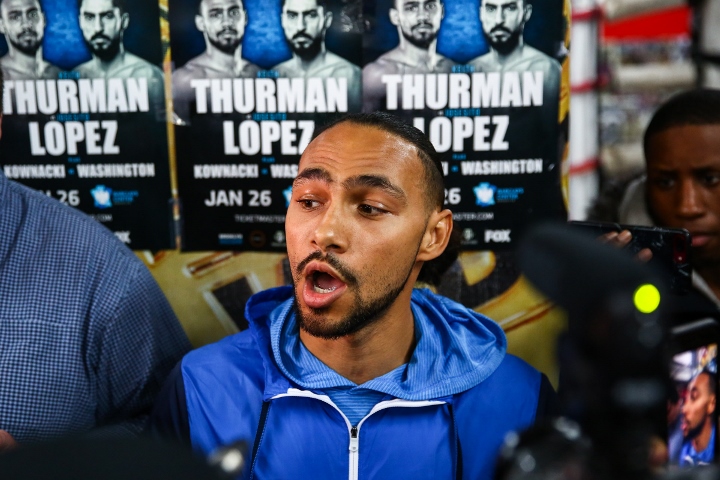 The welterweight title consolidation clash will take place July 20 atop a Fox Sports Pay-Per-View event live from the MGM Grand in Las Vegas, Nevada. A two-city press tour kicked off on Tuesday, but Thurman has already fully embraced Archie Eversole’s near-20 year old classic jock jam ahead of what he recognizes as the biggest fight of his pro career.

“This is just a dream come true,” admitted Thurman (29-0, 22KOs), a 2008 U.S. Olympic alternate who has held at least one welterweight title since March 2015. “I worked hard at being champion and wanted to face the greatest names in the sport of boxing.

“Years ago I wanted Floyd Mayweather and Manny Pacquiao. Floyd’s gone, Manny is here and I’m ready to challenge a legend. Come July 20, he will disappear. He’s a legend and will always be remembered in the sport. But I’m going to do to Manny Pacquiao what he did to Oscar de la Hoya.”

The event took place at the same MGM Grand Arena which also housed Pacquiao’s U.S. debut in 2001 and where he will fight for the 15th time in his illustrious career. The fighting politician—currently a senator in his native Philippines—played the venue in his most recent ring appearance, a 12-round win over Adrien Broner this past January.

His next opponent insists that it’s the last victory that Pacquiao will enjoy or fight he will ever again have.

“Oscar de la Hoya never fought again after he fought Pacquiao… and Manny Pacquiao will never fight again after he faces me,” promises Thurman, who is 4-0 at MGM Grand, including a 12-round victory over Robert Guerrero in March 2015 to become a full welterweight titlist in the first-ever Premier Boxing Champions (PBC) branded event.

The unbeaten Floridian has helped kick off the PBC model in primetime on NBC, ESPN and CBS in growing as a favorable TV draw. Wins over Shawn Porter and Danny Garcia—both live in primetime on CBS—helped establish his place as the top welterweight in the world, only for consecutive injuries to keep him out of the ring for nearly two years.

A rust-shaking unanimous decision win over Josesito Lopez this past January helped the 30-year old boxer reacquaint himself with the ring. Now, ‘One Time’ insists he’s truly ready for the big time—and at the expense of one of the biggest stars in the game today.

“On July 20 he’s going night night, Thurman vows. “Come July 21, there won’t be any talk of a rematch. Even though there’s a rematch clause in the contract he’s not gonna want it.

Watch it be Thurman's fight😂

Something I noticed, probably a little OCD. But the WBA made a Super Champion belt for Pacquiao/Matthysse. Maybe they were planning to strip Thurman? Seems strange. They are both holding a Super Champion belt in this picture [IMG]https://sa.kapamilya.com/absnews/abscbnnews/media/2019/sports/05/23/20190523_pacquiao-thurman-nypresscon-em.jpg[/IMG] Here’s the…

I was rooting for him against Danny Garcia (unfairly or otherwise due to his dad's antics). But, pledging to end someone's career is not classy. The boxing/sporting gods will not look kindly upon that kind of talk!