Kauffman: If I Lose To Wallin, I'm Retiring; His Claim To Fame Is Losing To Fury

The veteran heavyweight is so convinced he’ll beat the Swedish southpaw Saturday night that he has promised to retire if Wallin wins. Kauffman hasn’t fought since Luis Ortiz stopped him in the 10th round of their December 2018 bout at Staples Center in Los Angeles.

Shoulder surgery to repair a torn left labrum primarily has kept Kauffman from fighting since Ortiz beat him. The 34-year-old Kauffman (32-3, 23 KOs, 1 NC) happily accepted this 10-round fight with Wallin, as opposed to a tune-up bout, because the Reading, Pennsylvania, native feels defeating Wallin in the opener of Showtime’s tripleheader will quickly propel him into a high-profile fight.

“I posted this on social media and I stand true to this – I said if I don’t beat Otto Wallin, I’m retiring,” Kauffman told BoxingScene.com. “And here’s why: I have a lot more experience and I have a lot more ability than Otto Wallin has. His claim to fame is truly losing to Tyson Fury. He was unheard of until then. And I’m not taking nothing away from him. But people say, ‘Travis, why would you say that? He’s a tough southpaw. He’s a good southpaw. It’s your first fight back after two years.’ I never wanted to lose two fights in a row. I’ve said this since the beginning of my career – if I ever lose two fights in a row, I’m done.

“There’s still money to be made, but I know if I lose to him it’s gonna be a long time until I get another opportunity. It’s gonna be a long time until I get another six-figure payday. And let’s be real, I’m not getting any younger. I’ll be 35 a week after this fight, and I’ve been doing this 15 years professionally. I wanna go out there, win, get a huge opportunity, and win that, keep going. I’ve always said since the beginning of my career, I’m done if I lose two fights in a row. And I don’t believe I will lose. That’s why I stand firm to what I said. I lose this fight, I’m done. I truly believe I won’t lose. I’m that confident.” 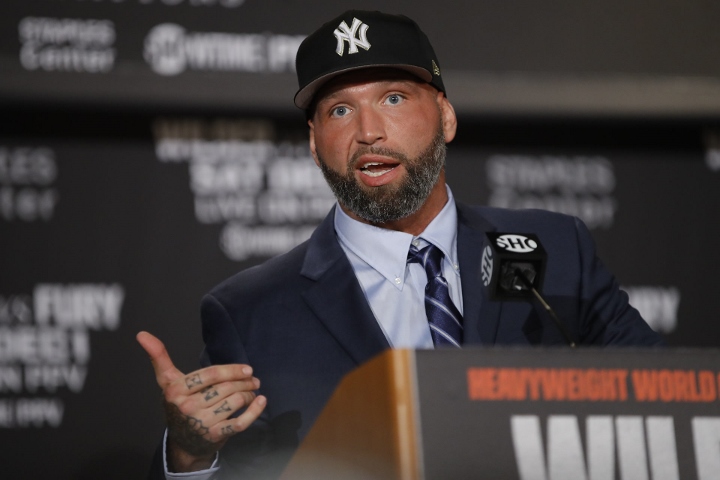 The 29-year-old Wallin (20-1, 13 KOs, 1 NC) hasn’t boxed since he gave England’s Fury (30-0-1, 21 KOs) a more difficult fight than Wallin’s resume and the odds on their fight suggested he could. Fury defeated Wallin by unanimous decision in their 12-rounder last September 14, when Wallin’s left hand opened a gigantic gash around Fury’s right eye in the second round at T-Mobile Arena in Las Vegas.

Wallin was supposed to return against Australia’s Lucas Browne (29-2, 25 KOs) on March 28 at Park MGM in Las Vegas, but Wallin withdrew from that bout after fracturing a bone in his left foot late in February. Showtime’s entire March 28 card ultimately was scrapped due to the COVID-19 pandemic.

Kauffman’s confidence is higher than when he opposed Ortiz because his surgically repaired shoulder feels much better.

“When he was supposed to sign with Eddie Hearn, he didn’t sign with Eddie Hearn. But Eddie Hearn offered him a three- or four-fight deal, and I was supposed to be his first fight back, and he said, ‘No. Travis is too tough of a test.’ You know, so it’s not no walk in the park for [Wallin]. It’s definitely gonna be a tough fight. I don’t think it’s gonna be a walk in the park for me. But I do believe I have that dog in me. That’s what’s gonna make the difference.”

In the 12-round main event, Phoenix’s David Benavidez (22-0, 19 KOs) will make an optional defense of his WBC super middleweight title against Colombia’s Alexis Angulo (26-1, 22 KOs). Following Wallin-Kauffman, Las Vegas’ Rolando Romero (11-0, 10 KOs) will meet the Dominican Republic’s Jackson Marinez (19-0, 7 KOs) in a 12-round fight for the WBA interim lightweight title.

[QUOTE=Squared.Circle;20710717]I'm not claiming European champions? Again, I'm saying, the European takeover is here. [/QUOTE]Like I said I don't group Euro fighters so you are just making **** up by saying I have posted stuff in the past only 2 Euro…

[QUOTE=Kannabis Kid;20710654]You know what they say if you are that close to the east you're far from the west plus you are claiming all Europe which is the Eastern Hemisphere don't worry nobody claims you guys on this side there's…

[QUOTE=Squared.Circle;20710333]Britain is in the Western Hemisphere ya gret mong :rofl: if you want to get technical then it's in both the East and West, but it's almost entirely in the West. You're probably the only person that doesn't consider it…

[QUOTE=Kannabis Kid;20710184]Anti-western as in hemisphere not lifestyle dumbass always talking **** on anyone from this side even Mexicans who run **** too and always beat up Brits leaving them on the floor like Charlie Edwards and Liam Smith. My family…