Katie Taylor: My Whole Career Has Been About Breaking Boundaries

Katie Taylor says she is fulfilling her childhood dreams by topping the bill at Manchester Arena on Saturday night when she bids to become a two-eight world champion, although she believes bigger and better fights lie in the future.

The undisputed world lightweight champion challenges Christina Linardatou for the WBO super-lightweight at the same venue were Britain's finest 140lb fighter of this century, Ricky Hatton, had many of his biggest fights.

The Irishwoman has top billing, despite the bill featuring the farewell fight of former WBA lightweight champion Anthony Crolla, who will be boxing Frank Urquiaga.

"I don’t think I ever thought I would be topping such a big bill as this," Taylor said. "This is everything I ever dreamed of as a kid. I can make history too, becoming a two-weight world champion. This is obviously huge for me.

"It’s amazing, I don’t feel worthy of being the headline ahead of Anthony Crolla in his farewell fight. But it is great to be part of this night for him too, what an amazing ambassador he has been for the sport throughout his whole career.  It’s a crazy week.

"This just goes to show how far women’s boxing has come in the last few years as well. People are very interested in these fights and my whole career has been about breaking boundaries." 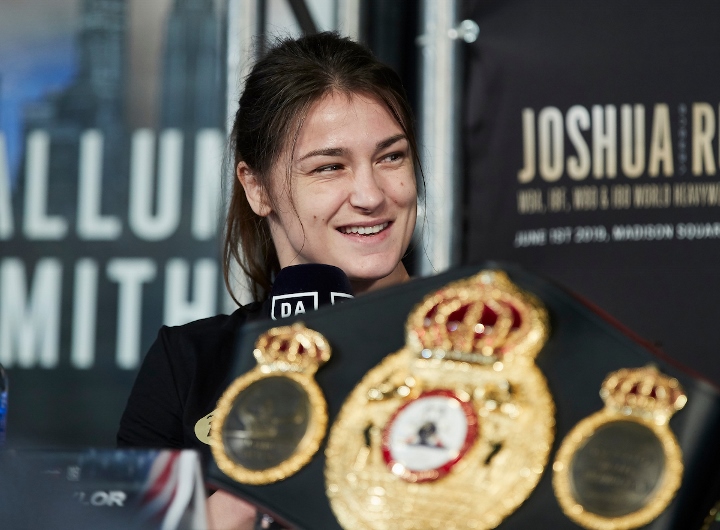 Taylor's career has continued on an upward trajectory. In her last fight in June, at Madison Square Garden, she unified the world lightweight title with a hotly-disputed majority points decision over Delfine Persoon. Taylor is adamant that she was a deserved winner, although a rematch is unlikely to be too far away.

"I probably should have boxed a bit more, but I feel I am better prepared for this challenge," she said. "For the last few years it has been fight after fight after fight and I had a bit of a chance to relax after the last one and recover. It’s going to do me a lot of good.

"After so many fights over the last few years it is good to have a break.

"I’ve had a longer camp for this fight, so that has given me the chance to work on a few things. But my focus has been the same, it has just been a question of getting the rounds in sparring."

Taylor is a strong favourite to beat her Greek opponent. Linardatou called it a "cat and mouse" kind of fight, clearly seeing herself as the predator. Taylor, though, says knows what to expect. "She’s a strong puncher, I’m going to be aware of that going into the fight," she said. "We’ll see how the fight goes."

Other possible big fights are emerging beyond Saturday, after Eddie Hearn, her promoter, signed Cecelia Braekus, the undisputed world welterweight champion, while Amanda Serrano , the WBO featherweight champion, and Chantelle Cameron are other opponents that have been talked about for some time.

On Saturday's undercard is Terri Harper, the unbeaten 22-year-old super-featherweight from South Yorkshire. Harper was too shy to ask to have her photo taken with Taylor when they met at the press conference, until someone made the request on her behalf.  One day they could meet in the ring. After all, Taylor is not thinking about retirement any time soon.

"I definitely feel like I have a lot more years left in me, but I will get out at the right time too," Taylor said. "There are definitely big fights out there for me, but I just look at one fight. There are fights out there that are mega fights, not just for women’s boxing but boxing as a whole. The best is yet to come."

Jump up to 147 and fight Braekhus then. I wanna see that.

Broke the robberies of the decade boundary with that persoon win... #FakeChamp

She will never break the Persoon boundary. Keep 🦆ing.

I was a Taylor fan until she moved up in weight to avoid a rematch with Persoon, who literally whipped Katie's Irish Ass.