Katie Taylor was just four months into her pro career for her lone other appearance in Manchester, England.

Like so many other big boxing nights in the city in recent years, the March 2017 card also featured local hero and former lightweight titlist Anthony Crolla. Sadly, it was confirmation of his last days as a threat to the lightweight crown, having come up well short in his rematch with Jorge Linares against whom he had conceded his title six months later.

Taylor claimed an eight-round decision on the undercard, with the 2012 Olympic Gold medalist and two-time Olympian going on to already accomplish so much more than that through just three years in the pro ranks. Now a reigning World lightweight champion, the 33-year old from Bray, Ireland attempts to become a two-division titlist when she challenges Greece’s Christina Linardatou (12-1, 6KOs) in the hethis Saturday at the famed Manchester Arena.

“The last time I fought in Manchester was actually on the undercard of Anthony’s rematch with Jorge Linares and it’s such a great boxing city,” notes Taylor (14-1, 6KOs), who headlines the show while Crolla trades places as a supporting player. 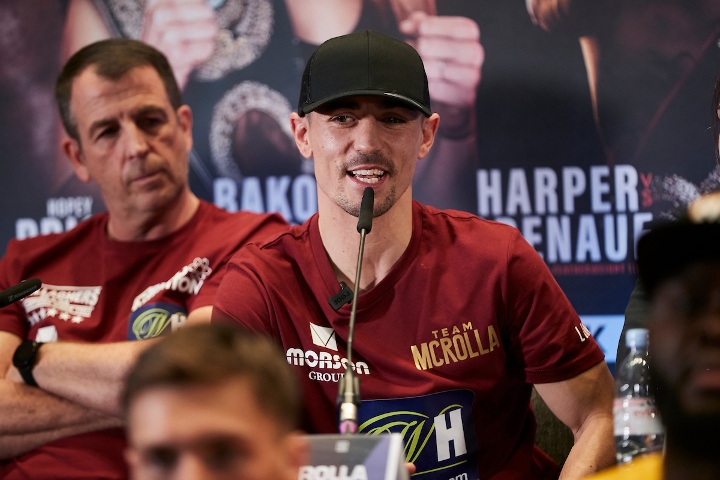 The event doubles as the final bout of Crolla’s celebrated 13-year career as he faces Spain’s Frank Urquiga (13-1-1, 1KO) in a scheduled 10-round lightweight bout.

"It’s the last one,” Crolla (34-7-3, 13KOs) acknowledged when the show was first announced. “If you stay in boxing too long, it takes more from you than you take from boxing.

“I’m going to miss these nights but am very thankful for the memories I have.”

Crolla enjoyed one of the sport’s more incredible comeback tales, having suffered near-fatal injuries in an attempt to thwart a robbery attempt by two burglars in Dec. 2014. A blow to the skull from a slab of concrete cost him a title Jan. 2015 title shot versus Richar Abril, but not even close to diminishing his desire to return and put a belt around his waist. Crolla fully recovered mere months later, going on to claim a lightweight belt in his Nov. 2015 rematch with Darleys Perez in this very venue, scoring a 5th round knockout just four months after fighting to a disputed draw in their first fight.

The 10-month reign ended with a close but clear points loss to Linares, along with the repeat defeat in their aforementioned rematch. Crolla managed three straight wins before running into pound-for-pound entrant and unified lightweight titlist Vasiliy Lomachenko this past April in Los Angeles, California. A 4th round knockout loss was enough to convince him that it was time to begin thinking about an exit plan. With that comes what will mark the 14th and final appearance at this arena, which is expected to house a packed and lively crowd.

Returning to the United Kingdom for a fight herself for the first time since last summer, Taylor couldn’t think of a more fitting way to commemorate the moment than to share the stage with an old friend.

“Anthony has been such a terrific ambassador for the sport throughout his career,” notes Taylor, who enjoys similar accolades on both sides of the Atlantic, especially in her native Ireland where she is the nation’s reigning and repeat Most Admired Athlete. “Coming back from adversity to win the World title, he always carries himself so well.

"It should be another special atmosphere in Manchester for his farewell fight so it’s great to be a part of that.”

ake Donovan is a senior writer for BoxingScene.com. Twitter: @JakeNDaBox

Katie "class act" Taylor! There are some who need to learn to appreciate her skill and what she brings to boxing in general. Not just womens boxing. War Lass!

I wish Katie would so humble as to acknowledge persoon beat her in her last fight ..she should have rematched her straightaway but the financial gravy train would come to an end 3 fights to early ...and that means more…