Irish boxer Katie Taylor wants to fight Delfine Persoon again next summer and deliver a performance that will "shut everyone up" as she continues in her aim to be known as "the best ever".

Taylor became undisputed lightweight champion in June when she beat Belgium's Persoon at Madison Square Garden, claiming the WBC belt to add to the WBA, IBF and WBO ones already in her possession.

The 33-year-old Irishwoman won via a majority decision with the scores 95-95, 96-94 and 96-94, and there was some controversy surrounding the result. 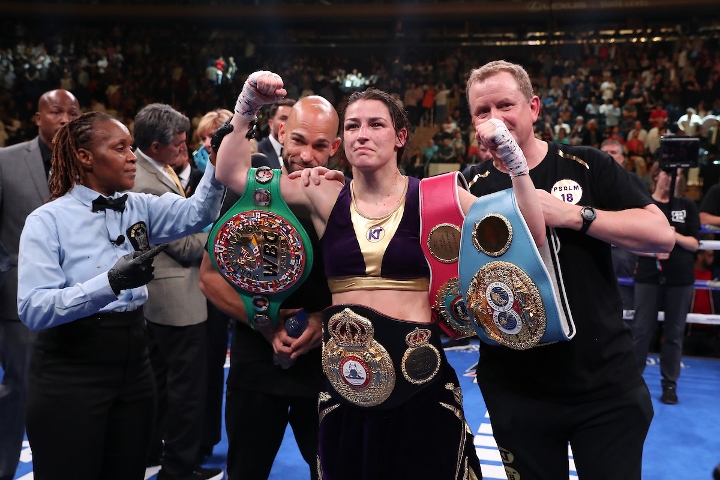 Some observers questioned the decision and Persoon was quoted in the Belgian media as saying she felt she had not lost and would be making a complaint.

Taylor will bid to become a two-weight world champion on November 2 when she faces WBO super-lightweight title-holder Christina Linardatou in Manchester, and hopes to follow that next year with a return to lightweight - where she says there is "a lot of unfinished business" - to face Puerto Rico's Amanda Serrano and then Persoon.

"It (the Persoon fight) was a touch-and-go fight, an all-out war really for 10 rounds, probably one of the most exciting fights I've ever been involved in, probably a bit too exciting for my liking," Taylor told the PA news agency.

"It's every fighter's dream to become the undisputed champion, that is the pinnacle of the sport right there, so I was very, very excited.

"To call the fight a robbery is an absolute disgrace in itself really. I am well aware it was a very close fight and that is why it is a fight that deserves a rematch as well.

"I'm not one for ducking or diving any challenge, I think my career has shown that so far. I love the big fights and I can't wait for that rematch, to kind of set the story straight really.

"I look forward to beating her a lot more convincingly, to shut everyone up basically!

"I was always aware it was going to be a very close fight and I overcame that. I came away with all the belts and deservedly so."

Taylor's clash with Greece's Linardatou headlines a Manchester Arena bill that also features what is set to be the last bout of local boy and former WBA lightweight champion Anthony Crolla's career, against a yet-to-be-announced opponent, and Joshua Buatsi, who won bronze for Great Britain at the 2016 Olympics, fighting Australian Blake Caparello.

Bray-born Olympic gold-medallist Taylor is unbeaten in 14 fights since turning professional in 2016.

Thirty-one-year-old Linardatou has lost once in 13 fights.

[QUOTE=Rip Chudd;20070090]She said they are going to rematch. I'm sure we would all like it to be immediate but we aren't the ones fighting. The judges robbed her, not Katie. And how are you gonna tell her how she feels?…

She has bigger things to worry about right now. AMANDA SERRANO.

[QUOTE=ceylon mooney;20070490]of course it was a robbery. persoon won fair and square. close doesnt mean the outcome was a tossup. competitive doesnt mean it could go either way. theres a criteria applied on a round-by-round basis, and this fight was…

I also would like to throw out a request. If someone didn't watch the fight then don't comment on it. You all who say Taylor lost make yourselves sound rediculous or ignorant to the sport of boxing