There are no more easy fights for Katie Taylor, who became a two-weight world champion – only the third from Ireland – as she claimed the WBO super-lightweight title, but was made to work hard all the way to wrench it away from Christina Linardatou in Manchester.

Taylor, 33, finished with bad swelling above her left eye, she was made to eat many of the Greek champion’s best shots too, but against a strong, harder-punching opponent, she was swift enough and accurate enough to earn a unanimous points decision.

Taylor looked overwhelmed as she was interviewed in the ring by Andy Scott, of Sky Sports.

“We knew from the start this was going to be a very, very tough fight, we said Christina was the best 140-pounder in the division,” Taylor said. “I boxed beautifully on the outside, I boxed smart for a change, instead of getting stuck into a fight this time.

“We knew we still had it. I dug deep against (Delfine) Persoon and came out with the victory. I’m now a two-weight world champion. I can’t wait for the rematch with Persoon and Amanda Serrano as well.” 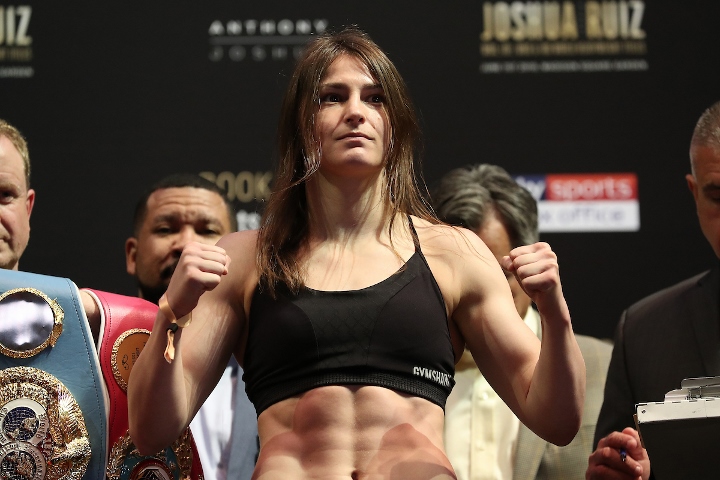 Despite mentioning those two names, as well as Cecelia Braekus, Taylor was not too keen to commit to her next fight.

“I’m going to enjoy this victory and leave the match-making to my team,” she said. “This is more than a dream to headline a show in front of so many Irish people.”

As against Persoon, whom she beat to unify the world lightweight title in June at Madison Square Garden, Taylor was grateful to the lead she built up in the first half of the fight, as Linardatou kept throwing bombs throughout.

Linardatou came out fast in the first round, showing lots of movement and coming forward to force Taylor onto the back foot. Taylor look flustered, but settled in the second round, as she boxed and moved, picking the champion off with her jab.

It was a pattern that was repeated throughout the fight, as Taylor had some good moments, especially when she opened up with combinations, but never really threatened to subdue her opponent.

From the fourth round onwards, Taylor also had to deal with swelling over her right eye. But while Linardatou looked to carry the extra power, Taylor outlanded her throughout.

Near the end of the eighth round, Taylor was working hard to keep the Greek boxer off but copped a big right and then another right landed behind Taylor’s ear that made her stumble. Taylor tried to move but was caught by a left-right combination before a right landed right on the bell.

The ninth and tenth were better, though, as Taylor kept moving, kept jabbing and kept enough distance between them to earn the win, by scores of 94-94 and 97-93 (twice).

Was it a legit win? Or BS like the McCaskill and Pearson fights?

[QUOTE=djbiancafrost;20161239]Its given shed lose again to Persoon and will lose also to either Braekhaus and Serrano. But who wins between Persoon/Serrano/Braekhaus?[/QUOTE] Braekhus easily outpoints any of them. The only person who might beat her is Shields, and that's just because…

Even though Taylor edged the fight against linardatou, all credit to Christina because she made the fight very exciting hope they have a rematch at some point in future.

No doubt in my mind that Taylor easily outpointed Linardatou, she did what she should have done in the Persoon fight and used movement while pot-shotting. She took it at 7 rounds to 3 on my card. Looks like it…

Its given shed lose again to Persoon and will lose also to either Braekhaus and Serrano. But who wins between Persoon/Serrano/Braekhaus?