Kathy Duva: What Will Boxing World Look Like Without HBO In It?

Kathy Duva remembers that June 2002 afternoon as if it were yesterday.

It was an especially meaningful moment for the veteran promoter because it marked the first time as Main Events’ CEO that Duva was the lead negotiator for a lucrative HBO bout involving one of her company’s fighters. She sat in on many meetings at HBO’s headquarters in New York – first alongside her late husband, Dan Duva, then with former Main Events executive Gary Shaw and manager Shelly Finkel.

On this day, though, Kathy Duva was the one fighting for more money for Arturo Gatti. About five weeks earlier, Micky Ward and Gatti gave us an instant classic, an unbelievably brutal battle that is commonly considered one of the greatest action fights in boxing history.

She wanted more money for the late Gatti and Lou DiBella, Ward’s promoter, sought a bigger purse for his fighter. Kery Davis, then HBO Sports’ senior vice president, didn’t think their rematch was worth what Duva requested, even though they had produced an epic encounter the previous month at Mohegan Sun Arena in Uncasville, Connecticut.

“Ross was the one who was giving us the money,” Duva recalled for BoxingScene.com, referring to former HBO Sports president Ross Greenburg. “Kery was the one saying, ‘Are you crazy? He’s a club fighter.’ And I was saying, ‘No, they’re not! I don’t care what they are! They deserve all the money that we give them! They deserve more!’ And [Davis is] going, ‘This is insane!’ And Ross just kept giving us more money.”

Gatti and Ward were paid handsomely for their second and third fights, both of which Gatti won.

Over the years, however, HBO has committed less and less money to its iconic boxing franchise. That sparked speculation in recent years that the premium cable network synonymous with boxing would stop televising it. 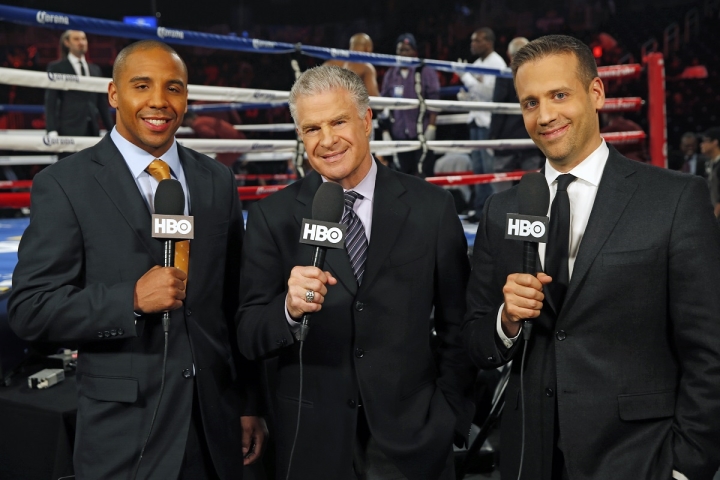 That moment nearly has arrived. The HBO doubleheader Duva’s Main Events is promoting Saturday night in Atlantic City, New Jersey, will be the next-to-last boxing show HBO will televise.

The network announced in a statement late in September that it’ll no longer broadcast boxing in 2019.

HBO still draws respectable ratings for boxing, just not nearly as many viewers for the sport as it once attracted.

The first Gatti-Ward fight, for example, was watched by an average audience of approximately 3.5 million. The last bout HBO aired live, Daniel Jacobs’ split-decision victory over Sergey Derevyanchenko, averaged 500,000 viewers on October 28 from The Theater at Madison Square Garden.

Declining viewership and the emergence of deep-pocketed competition from DAZN, ESPN and FOX, in addition to longtime rival Showtime’s strong commitment to boxing programming, prompted decision-makers at HBO to move away from airing boxing.

“Obviously, it was quite a shock,” Duva said. “While I think everybody knew this was a possibility, I don’t think anyone expected it to happen so abruptly.”

As a promoter that has always shown loyalty toward HBO’s boxing brand and expressed admiration for it, Duva doesn’t know what the network’s exit from the sport will mean moving forward.

“I can’t think of a fighter, and I don’t know that anyone can, who became a huge star in boxing in the United States, and probably a lot of other places, without fighting on HBO [since its first fight in 1973],” Duva said. “So this is gonna be a very interesting transition, to see what happens. The thought was always, more than to become a world champion, was to become an HBO fighter. And the best example of that was Gatti-Ward, with no titles on the line. That was really about if HBO saw value in what you had, you didn’t need a world title. That was how dominant they were.

“So this is a whole new world we’re in and, in some respects, there’s a ton of money that’s out there and it’s being given to elite-level fighters, which is great for them. And then, in other respects, I’ll be as interested as anyone to see how we take someone from zero – as we did with Sergey Kovalev, for example – and turn him into a major star. Because I’m not quite sure how you do that. So that’s gonna be the challenge going forward for everyone in the business – what’s our world gonna look like without HBO in it?”

HBO helped build numerous Main Events fighters into stars. Three of them, Gatti (21), Lennox Lewis (23) and Pernell Whitaker (19), are among the top 12 on the list of boxers who’ve made the most HBO appearances.

Bivol told BoxingScene.com recently that he took less money for this fight than he was offered to box on other platforms because he has long wanted to headline an HBO “World Championship Boxing” broadcast. If Bivol beats Pascal, the hard-hitting champion will have plenty of profitable offers from which to choose, including propositions from DAZN and ESPN.

“If you’re an elite fighter at the moment, you’re in a beautiful position,” said Duva, whose company has worked in conjunction with Bivol’s promoter, World of Boxing, on his four HBO or HBO Pay-Per-View fights since June 2017. “But if you’re not, wow, I don’t know what happens to you. Obviously, my job is gonna be to figure that out, but that’s a challenge because for 45 years there was one answer. HBO was the biggest and the best. That was the brand and that was the thing that made you an elite fighter. If you were fighting on HBO, then you must be an elite fighter. It was incredible branding. And now, with that gone, it’s gonna be interesting.

“These are things that we have no control over. It’s gonna happen, with or without us. ESPN is gonna do their thing, FOX is gonna do their thing. We’ll see what other networks wanna get involved. But it used to be easy. We had a goal and I knew what it was – get to HBO. Now I’m not sure what the goal is. In the end, I guess whoever’s putting up the money becomes the brand. If ESPN wants to be, it’ll be them. They are the No. 1 brand in every other sport. They just never chose to be that in boxing. If they wanna be that, then it’s easy. I don’t know how you become a star fighting on an app. But for the short run, because the networks are interested, for whatever reason, in investing in boxing, we all have an opportunity to exploit that. Maybe we’ll go to the world we had before HBO, which was networks were putting on fights, people were watching them [on ABC, CBS and NBC] and when we got to a very, very big fight, that’s was what went on closed circuit, without a big company behind it. It’s gonna be interesting for all of us.”

Kathy Duva seems like a sweetheart. But she was loyal to HBO to a fault. Seems like she never seriously entertained any other offers even though they offered more money. Kovalev wasn't even signed with HBO when she pulled out…

[QUOTE=factsarenice;19293001]No offense but what evidence do you base that upon?[/QUOTE]I said I'm willing to bet that this is the case. Evidence being - Everyone wants to get paid at the end of the day. At least the majority, do you…

[QUOTE=factsarenice;19293001]No offense but what evidence do you base that upon?[/QUOTE] A lot of Haymon fighters could've left and signed with GB over at HBO but didn't. That's about as good of evidence as was supplied that fighters would take pay…

HBO can bounce back. Just change their mind set and get rid of the company mfer’s and reboot with fresh independent ingredients

[QUOTE=lolpz;19292323]That's one fighter....I'm willing to bet you any amount of money that the majority of top fighters would take the money over HBO.[/QUOTE] No offense but what evidence do you base that upon?