Matchroom Boxing are delighted to announce the signing of Bantamweight contender Kash Farooq on a multi-fight promotional deal.

Nicknamed ‘The Untouchable’, Farooq (13-1 6 KOs) debuted in 2015 at just 19, winning a comfortable points decision in Glasgow.

The now 23-year-old notched five more points victories consecutively, before securing his first stoppage victory as a professional in September 2017, dismantling Bulgaria’s Georgi Andonov in the first round setting himself up for his first shot at a title in the paid ranks.

Farooq took this opportunity with both hands, stopping Scottish compatriot Scott Allan in the eighth to claim the Scottish Area title at 118lbs to move 8-0.

His knockout run continued into 2018, disposing of Jose Hernandez in the second round before stopping Jamie Wilson in the first three minutes to scoop the vacant British title, an admirable achievement in just his tenth pro outing. 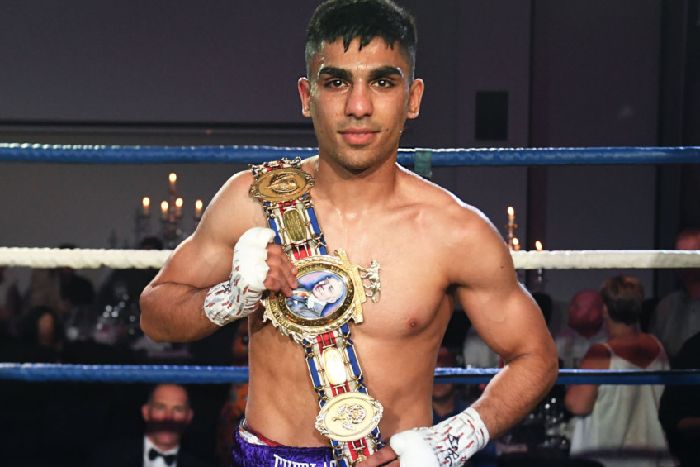 The fight did not fail to live up to the expectation, a 12 round war between the pair ensued with Mcgregor getting the nod with a heavily debated split decision win.

There is the potential of some big fights in 2020 for Farooq, who will be hoping to return to winning ways early in the new year.

"Eddie first contacted my manager about a week and a half after the McGregor fight," said Farooq. "It was really exciting to hear that Eddie was watching my fight, he thought that I won the fight as well. I'm really excited to be part of the team now and I can't wait to get started under the Matchroom Boxing banner.

"I came to Glasgow in 2002, I was born in Pakistan. I've been in Glasgow about 17 or 18 years. It's been my home for a long time and I'd rather be there than anywhere in the world. Its been great to me, the people are great and I've loved every minute. I'd love to bring some more big fights to the city.

"Going into the McGregor fight, he was always the bigger name, everyone knew who he was down south. I surprised a lot of people with my style. I proved that I'm a threat at the weight. I was really confident going into the fight and I thought I did enough to win. I put on a great performance but it just went the other way. I've just got to move on. This is boxing and things like that happen all the time.

"For me it's all about moving on, keeping my head up and not letting things like that keep me down. I would love to get the rematch but do I think it's going to happen in the next fight? No. I would love it down the line somewhere though. Now it's all about winning and getting better and better every fight. I'm always learning. You only stop learning once you retire. I'll get better every fight and this is just the start for me. New fans can expect a fan friendly style from me, a clever style. You'll see something different, that's all I can say."

"I’m delighted to welcome Kash to the team," said Eddie Hearn. "He is a special talent that really impressed me last time out and I believe he has so much potential in the sport. He will be back in a title fight in the spring and I look forward to many exciting fights with him in Scotland and around the world."

[QUOTE=Marvlus Marv;20259572]I'm glad someone has finally signed Kash. He was up against McGregor and MTK in his last fight so no surprise they never gave him the deserved nod. Kash is dripping with talent and he's sure to go all…

[QUOTE=Marvlus Marv;20259572]I'm glad someone has finally signed Kash. He was up against McGregor and MTK in his last fight so no surprise they never gave him the deserved nod. Kash is dripping with talent and he's sure to go all…

I'm glad someone has finally signed Kash. He was up against McGregor and MTK in his last fight so no surprise they never gave him the deserved nod. Kash is dripping with talent and he's sure to go all the…