George Kambosos Jr. and Lee Selby both entered 2020 with the hope of facing each other for the right to land a title shot presumably by year’s end.

At best, their head-on collision will serve as their lone piece of ring action this year.

The aforementioned International Boxing Federation (IBF) lightweight title eliminator has been rescheduled for the second time in barely two months due to the ongoing coronavirus disease (COVID-19) pandemic. Originally slated for May 9 and then pushed back to July 11, the scheduled 12-round bout will now take place on October 3 according to Matchroom Boxing, whom represents Selby and will present the event.

The one constant in this matchup has been the location—the show will still take place at Motorpoint Arena Cardiff, Wales. 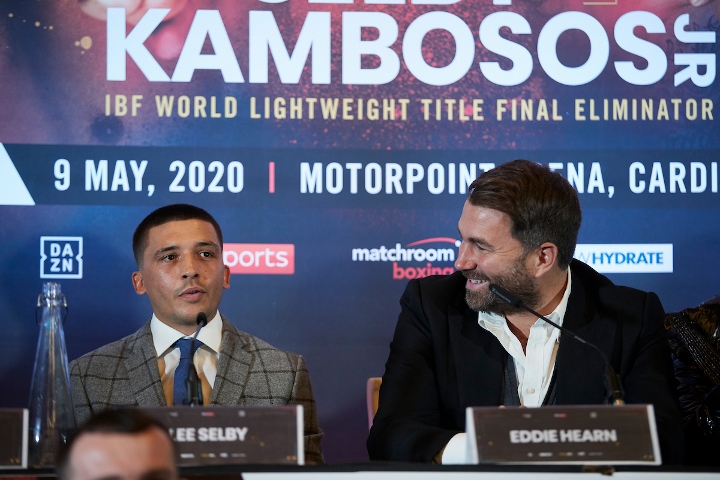 Selby (28-2, 9KOs)—who hails from nearby Barry, Wales—fights in his home country for the first time in more than six years, with the former featherweight titlist resurfacing in the lightweight mix thanks to a pair of wins in 2019. The now 33-year old Welshman outlasted Wilmington, Delaware’s Omar Douglas over 12-rounds in his first fight at the weight last February, before edging out former three-division titlist Ricky Burns last October.

Kambosos Jr. (18-0, 10KOs) adds to his growing road warrior reputation, with this opportunity marking four different countries he will have fought in his last six fights.

The unbeaten lightweight from Sydney, Australia—who is guided by 2019 Manager of the Year nominee Peter Kahn and Hall of Fame-elected promoter Lou DiBella—enjoyed a breakthrough 2019 campaign with three wins on the year. None were bigger than his split decision over former lightweight titlist Mickey Bey, scoring a dramatic knockdown in the 10th and final round to seal the victory.

Whomever prevails in their now thrice-scheduled eliminator will serve as the mandatory challenger to the IBF title currently held by Teofimo Lopez. With that will come a longer wait for a shot at the crown; Lopez (15-0, 12KOs) is awaiting clearance for a mouthwatering multi-belt unification clash with Vasiliy Lomachenko (14-1, 10KOs).

Also revealed in the press statement from Matchroom Boxing is the rescheduling of a crossroads bout between England’s Lewis Ritson and Mexico’s former lightweight titlist Miguel Vazquez. Their clash will now run on October 17, still due to take place at Newcastle Arena in Ritson’s birthtown of Newcastle, England. The bout was originally due to take place April 4, with the ongoing health crisis pushing it back to June 27 and now in October.

The same statement revealed that the planned July 4 Sky Sports Box Office event in Manchester, England has been officially canceled. The show was to have been headlined by a heavyweight clash between Dillian Whyte and Alexander Povetkin, with a women’s boxing superfight between Katie Taylor and Amanda Serrano in the chief support. Both bouts are instead being targeted for Matchroom Boxing’s planned Fight Camp series, to take place outdoors in front of a limited onsite audience at company headquarters in Brentwood, England.

4 countries in 6 fights, top marks... You can't say the lad isn't afraid to chase his dreams.. going to be a tough fight for both boxers...

All those training camps with Manny Pacquiao is going to serve 'Ferocious' George Kambosos against Lee Selby. Mickey Bey got that work, Selby, you're getting it next baby!

This Kambosos kid looks half decent. If he’s a good price he’s definitely worth a few quid to beat Selby. Selby just isn’t strong enough to compete at 135 IMO.