Nearly seven months after previously agreeing to terms that would have him traveling to the United Kingdom, Selby and his team remain in control of the ordered fight after his side was able to secure the rights to the fight. A purse bid hearing held via video conference call by the International Boxing Federation (IBF) was won by Matchroom Boxing with a winning submission of $277,777 during Tuesday’s session. The amount edged out the $260,000 submission offered by promoter Lou DiBella.

Per rule IBF Rule 9.D covering purse bids for title elimination bouts not featuring a number-one ranked contender, Kambosos—a 27-year old contender from Sydney and currently ranked number three in the IBF lightweight rankings—is entitled to the greater amount of a 60/40 split over Selby ($166,667.20), who is one spot below at number four. The balance of just over $111,000 will go to Selby, who will likely retain hometown advantage for the bout, where the winner becomes the IBF lightweight mandatory challenger. 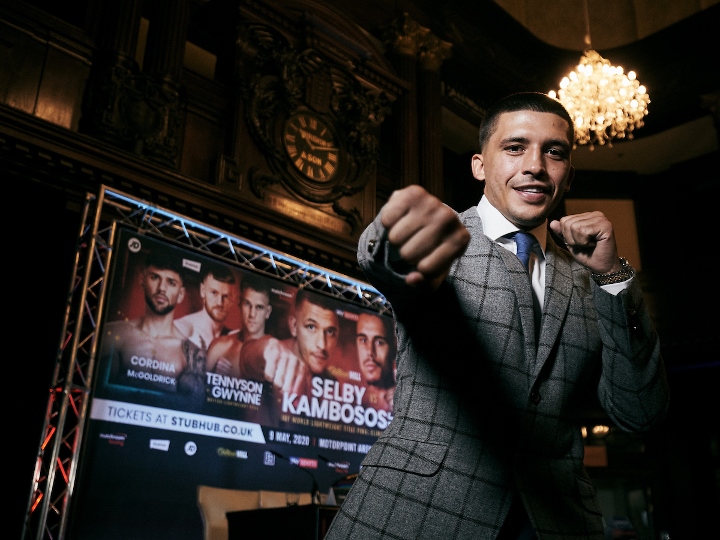 The purse bid hearing was ordered on August 20, shortly after a previously agreed-upon deal fell apart once the originally-promised purse amounts were no longer in effect.

Both sides reached a deal earlier this year for a fight that was to take place May 9 in Selby’s home region of Cardiff, Wales and promoted by Matchroom Boxing. The event was postponed due to the ongoing coronavirus pandemic, which also ruined plans for a rescheduled July 11 fight date.

All involved parties agreed to move forward with a working date of October 3, just in time to establish the mandatory challenger for the IBF lightweight title that will be at stake later in the month. Its current claiming, Brooklyn’s Teofimo Lopez (15-0, 12KOs) is in training camp for a three-belt unification bout with Ukraine’s Vasiliy Lomachenko (14-1, 10KOs), which takes place October 17 on an ESPN platform live from Las Vegas.

However, the guarantee of an established mandatory challenger in waiting is no longer in place. The October 3 date fell apart after Kambosos’ side refused to accept a paycut reportedly in excess of 33% of his previously promised $150,000 fight purse package to travel to Selby’s hometown.

Tuesday’s purse bid hearing results in an increase in pay from the original amount.

Neither boxer has yet fought in 2020.

Kambosos (18-0, 10KOs) is coming off of his most notable win to date, a 10-round decision win over Mickey Bey last December at Madison Square Garden in New York City. The bout served as the curtain raiser on a show which saw the coronation of Lopez who violently blasted out exiting IBF titlist Richard Commey inside of two rounds.

Just five days later came the order for Kambosos to begin negotiations with Selby (28-2, 9KOs), a former featherweight titlist from Barry Wales who has won two straight since moving up two weight divisions.

Selby held the IBF featherweight title for three years dating back to a May 2015 decision over then-unbeaten titlist Evgeny Gradovich. Four successful defenses followed before dropping a heartbreaking 12-round decision to unbeaten Josh Warrington in May 2018, just 11 days shy of his three-year anniversary as champ.

The loss to Warrington was Selby’s final fight at featherweight. His lightweight debut came last February, outpointing Omar Douglas over 12 rounds. Selby did the same in his most recognizable win to date, also doubling as his last ring appearance in his majority decision victory over former three-division titlist Ricky Burns last October in London.

Refusal by either side to go through with the ordered title eliminator in present form will result in an automatic demotion in the IBF lightweight rankings below the number-ten slot for a minimum of six (6) months per IBF Purse Bid Rule 9.C—Refusal To Participate. Furthermore, the willing participant will then be ordered to begin negotiations with the next available highest-ranked boxer.

At present moment, Argentina’s Gustavo Daniel Lemos (24-0, 14KOs) is ranked number five by the IBF and currently not scheduled to fight. One spot below is Mexico City’s Isaac Cruz (19-1-1, 14KOs), who is already committed to a separate title eliminator with former two-time title challenger Diego Magdaleno (32-3, 13KOs; ranked number eight by the IBF) on a forthcoming Premier Boxing Champions (PBC) event this fall.

I don't understand how Hearn can throw away millions on garbage fights like Jacobs vs Chavez Jr. then try to force Kambosos take a significant pay cut when he was only making $150k.