The lightweight world title elimination fight between Australia’s George Kambosos Jr. and Lee Selby, scheduled for Oct. 3 in Cardiff, Wales, Selby’s home country, has been canceled and is headed to a purse bid.

Lou DiBella, Kambosos’ promoter, and Peter Kahn, his manager, told BoxingScene on Tuesday that Selby promoter Eddie Hearn of Matchroom Boxing did not want to leave in place the terms of the deal that they had signed for and that they declined to renegotiate.

“Eddie didn’t want to leave the deal in place and we didn’t want to take a reduction to go to Wales when George is higher in the ratings than Selby and we have the (60-40) advantage in a purse bid,” DiBella said. “So why take a gigantic pay cut when we weren’t getting that much in the first place? It was a substantial reduction and we weren’t willing to do it. So I think we’re going to go out there and try to do it with an Australian network in Australia.” 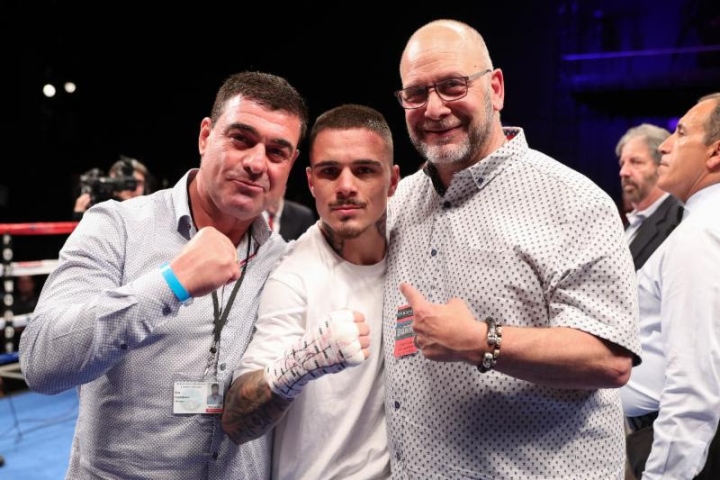 If the fight takes place, the winner would become the mandatory challenger for the IBF 135-pound world title held by Teofimo Lopez Jr., who is scheduled for a three-belt unification fight with Vasiliy Lomachenko in October.

Kahn was disappointed by how it has worked out. He told BoxingScene that he, DiBella and Hearn met in Miami, Florida, on Jan. 30 on the night of Hearn’s Demetrius Andrade-Luke Keeler DAZN card and agreed to the deal that would have seen Kambosos travel to Wales to fight Selby on May 9.

After the deal was signed, the coronavirus pandemic shut down boxing and the May 9 date was postponed until Oct. 3, with Hearn’s reasoning being that they needed to be able to generate revenue from ticket sales to help pay for the show.

“We understood the need for that fight to be postponed due to Covid-19. We fully understood that,” Kahn said. “We also understood it was a fluid situation and a new date would be forthcoming. The IBF was asking for contracts, so Eddie proposed Oct. 3 in Wales. We said no problem. We’re good. Now, Eddie went back to DiBella and said if George will take a 33 percent pay cut we could do that fight and he also left it open that he was open if Lou had any other ideas or solutions. We proposed Selby coming to Australia and never really got an answer to that.”

So, Kahn said he sent the IBF a letter on Monday seeking clarification from the sanctioning body.

“I have a fighter simply looking for answers,” Kahn said. “If Top Rank can do their summer series in the bubble and Matchroom can do its ‘Fight Camp’ shows and PBC is back rolling with shows on Fox and Showtime and Matchroom had a show (on Saturday) in the United States and Golden Boy did the Vergil Ortiz fight, boxing is back. So I have to answer to the fighter I manage when he asks why is his fight not taking place.”

“So that means the way things are going the No. 2 eliminator could take place before the No. 1 eliminator,” Kahn said. “I asked the IBF for clarity and if we can move on from Selby. (IBF president) Daryl Peoples wrote back saying that, per the IBF rules, they will order a purse bid. We’re going back to the purse bid we avoided in January. Back to square one. But we are not willing to accept a 33 percent reduction after agreeing to go to Wales. For that we could have gone to purse bid in the first place.

“Eddie said there’s no fight on Oct. 3 unless were willing to take a 33 percent reduction in the money and we said no. We said we’re gong to go to purse bid.”

Hearn told BoxingScene said he hoped to save the show and wanted to wait to see if they could have fans in attendance but said that under the current conditions of not having spectators allowed the fight would indeed be off “if they don’t take our revised offer.”

Kambosos (18-0, 10 KOs), 27, is coming off his biggest win, a 10-round decision over former lightweight world titlist Mickey Bey on Dec. 14 at Madison Square Garden in New York, on the Terence Crawford-Egidijus Kavaliauskas undercard.

Hearn was trying to do Kambosos dirty like he did Amanda Serrano.

[QUOTE=Angeljuice;20713989]If the fight was likely to lose money you believe Matchroom should take the hit? All purses are being reduced right now during Covid-19, I think Hearne would rather have someone else arrange this one, it won't make much (if…

[MENTION=13011551]Oldskoolg[/MENTION]ay ejaculated all over his keyboard at the thought of Eddie Hearn having financial troubles.

[QUOTE=TrillScottHeron;20713413]Solid scrap down the drain b/c Matchroom is being cheap. Can p.much guarantee that the winning bid will be $250k+, which is all it would take for Kamboso’s side (60/40 split) to receive intended purse. All Hearn and co. are…

Looks like Lee Selby is dipping on Killa-Kam, because Selby is #1. with the WBO. I'm thinking now that Ryan is out the rankings with the WBO by taking on Luke Campbell for the WBC 'Interim', Selby is thinking on…