Julian Williams: I Want To Make My Mark on Boxing History

Six pounds. Far enough to keep Julian Williams’ Saturday title fight at 154 against Jarrett Hurd, but close enough to remind the Philadelphian that there is a history in his city for those who competed at or around 160 pounds, history he is expected to add to by becoming a world champion in Fairfax, Virginia.

When I first spoke to Williams, he was 24 years old, 18-0-1 and about to make it 19-0-1 with a win over Jamar Freeman in December 2014. He was well aware of what was ahead of him, but more importantly what preceded him.

Frankly, “J-Rock” was a can’t miss, one of those fighters where it wasn’t a question if he was going to win a world title, but when. And he was determined that 2015 was going to be his year.

Williams was a young man in a hurry. As admirable as that ambition is, boxing often has a way of punishing those pursuing such lofty goals before their time. Williams didn’t break out in 2015, but he did get closer to the world title shot he ultimately received 15 days before Christmas in 2016 against Jermall Charlo.

But there would be no happy holidays in the Williams household, as the rising star got shot down by Charlo, who halted him in five rounds. 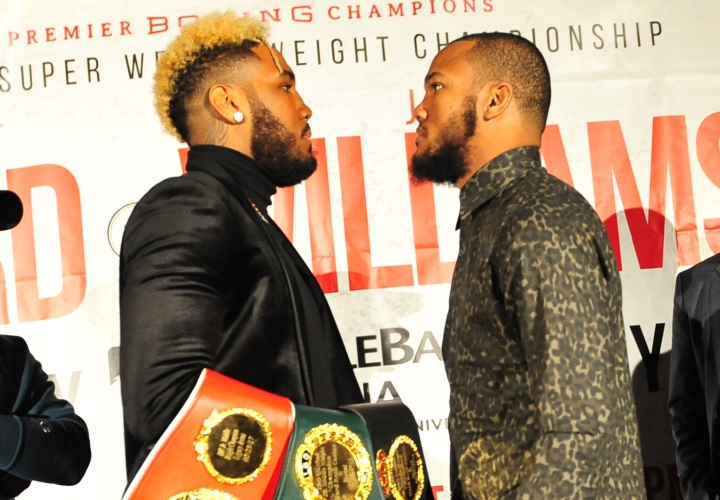 Then he was just like everybody else, back into the pool of contenders all scratching and clawing for that shot at glory. Some never get that second shot. Some never get back what made them special in the first place. Julian Williams went back to the gym to work with trainer Stephen “Breadman” Edwards, someone whose grasp of history surely made the young contender know that the Charlo loss was a bump in the road, not the end of it.

“You just get back up on the horse,” said Williams during a recent media teleconference. “You just can't stay down too long. So I just got back in there and got a couple of wins. I think I definitely grew from that fight. Every experience is a learning experience. I think I've got a championship level of experience and that's invaluable.”

Six months after the Charlo fight, Williams returned with a seventh-round stoppage of Joshua Conley. Then came a win over former world champion Ishe Smith and 2018 victories over Nathaniel Gallimore and Francisco Javier Castro. He wasn’t always spectacular and he wasn’t perfect, but he was fighting, and fighters fight.

Ultimately, the call came for a second title shot against the surging Hurd, who is closing in on a place on the pound-for-pound list after wins over Tony Harrison, Austin Trout and Erislandy Lara.

Williams, now 29, will be the underdog, and he’s also fighting in the backyard of the champion from Maryland, but he doesn’t care about such matters.

It brings to mind the 2002 bout between Eric Harding and Antonio Tarver, where Harding was knocked down, got back to his feet and was asked by referee Bill Paige if he was okay to continue.

So is Williams, and that means never letting your opponent – or anyone for that matter – see you sweat. So as fight night approaches, Williams is as cool as he’s ever been. That doesn’t mean he’s let go of the slights that come when an “0” turns into a “1”.

“Boxing's got a way of pushing people out that take a loss,” he said. “And it's like, ‘Oh, they're done.’ The loser's always done. And boxing's not about undefeated records. I think a career should be judged as a whole, when the career is finished.”

The middleweight greats from Philly didn’t leave the sport perfect. Not Hopkins, not Briscoe, not Monroe, Watts or Hart. But when they lost, they fought back harder. Williams is ready to follow that lead.

“I don't know if I'm forgotten like some of these sports writers or experts might say,” he said. “I wasn't going to let that happen. I know how boxing works. Losses happen. Knockouts happen. Just because you take a loss that doesn't mean you can't come back and be a great fighter.”

And as good as Hurd is, he may be Williams’ best chance to start being great. Trout gave Hurd a tougher than expected scrap, and the 28-year-old needed a 12th round knockdown to beat Lara. Add in the fact that he’s only one fight removed from shoulder surgery and is likely dealing with a mental letdown from seeing his long-awaited showdown with Jermell Charlo derailed by Harrison, and Williams has plenty of reasons to believe he will leave Virginia with a world championship.

“Well, my confidence doesn't come from his vulnerability,” he said. “My confidence comes from my own ability and what I know I can do in a boxing ring. He's been able to overcome his vulnerability and everything he's faced. But I'm motivated by the glory, the titles, and the money. Everybody has an opinion so I don't really care or dig too far into people's views on the fight. I can't get into that because if I do, I'll be on social media until three in the morning every night.”

Julian Williams doesn’t have time for that. There’s a title to get. For himself, his team, his family, and his city.

“After I win the fight on May 11th, then everybody's going to run back and say, ‘He's a great fighter,’” said Williams. “I just want to cash my check and see my kids. That's it.”

This is a tough fight for Hurd. I can see him falling behind and needing a KD or KO to win again. I don't know how much longer he can fight those kinds of fight. This might be the fight…

I'm rooting for J-Rock, but I just don't see it.

that Charlo KO was a thing of beauty - I don't know if Charlo will ever reproduce that in an important fight or if J-Rock will ever have to again face such a crushing counter. Hurd is one of my…

If J Rock boxes as well as he can, this will be a great fight.

I kinda disagree. I could see a situation where he gets dropped early. Hurd thinks he’s finished. Then Julian mounts a comeback and boxes Hurd up.