Not even a late surge by a previously battered Andy Vences could disprove the old adage of never leaving a fight in the hands of the judges.

Doing so cost the San Jose, California-based junior lightweight what appeared to be competitive but well-earned victory on Tuesday.

Luis Lopez was the latest “B” side opponent to score a significant upset in Top Rank’s summer boxing series at MGM Grand Conference Center (“The Bubble) in Las Vegas. The Mexicali native claimed a split decision win over Vences in their ESPN-televised chief support Tuesday evening. 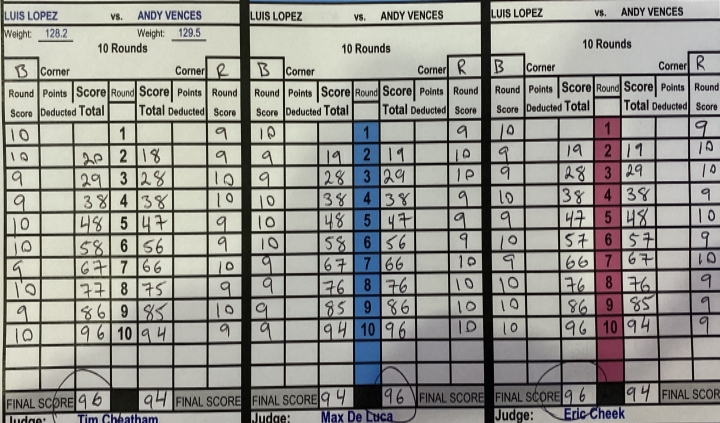 Judges Eric Cheek and Tim Cheatham both scored the contest 96-94 in favor of Mexicali’s Lopez (21-2, 11KOs), with the same score in favor of Vences turned in by judge Max DeLuca, the lone official from out of state (based in Tustin, California, which also produced legendary fictional TV character John Locke).

The three ringside officials were unanimous in just four of the ten rounds scored, in line with a decision most observers believed could have gone either way—and did. All three judges had Lopez winning rounds one and six, while unanimously awarding rounds three and seven in favor of Vences.

Each judge cast the dissenting score in four of the 10 rounds.

Judges Cheek and Cheatham—both based in Nevada—agreed in scoring rounds one, six, eight and ten in favor of Lopez, while awarding Vences rounds scoring rounds three and six.

Six of the first seven rounds saw judges Cheek and DeLuca in lock step. Both had Lopez winning rounds one, four and six, while seeing Vences take rounds two, three and seven.

Judges Cheatham and DeLuca agreed on rounds three, seven and nine in favor of Vences and rounds one, five and six in favor of Lopez.

The past month has seen judge Cheatham come under fire for several scorecards turned in during the ESPN series. On this particular evening, it was judge Cheek who caused double takes, primarily due to his having Lopez sweeping the final three rounds.

Those who offered the case of Vences deserving the nod cited his ability to overcome a hellacious sixth round to seemingly seize momentum down the stretch. Instead, that momentum only lasted through the end of round seven. Lopez claimed rounds eight and ten on two of the three cards to secure the upset win, one in which Vences disagreed with but ultimately accepted with class.

The 10-round bout served in chief support to a main event that was far less competitive and lacking entertainment value, as Jose Zepeda cleanly outpointed late replacement Kendo Castañeda.