Juan Carlos Abreu made it clear Thursday that nothing about boxing Jaron Ennis concerned him.

Apparently, he wasn’t worried about making weight, either. The Dominican veteran came in a whopping 3¼ pounds overweight Friday morning for their 10-round welterweight fight Saturday night at Mohegan Sun Arena in Uncasville, Connecticut. 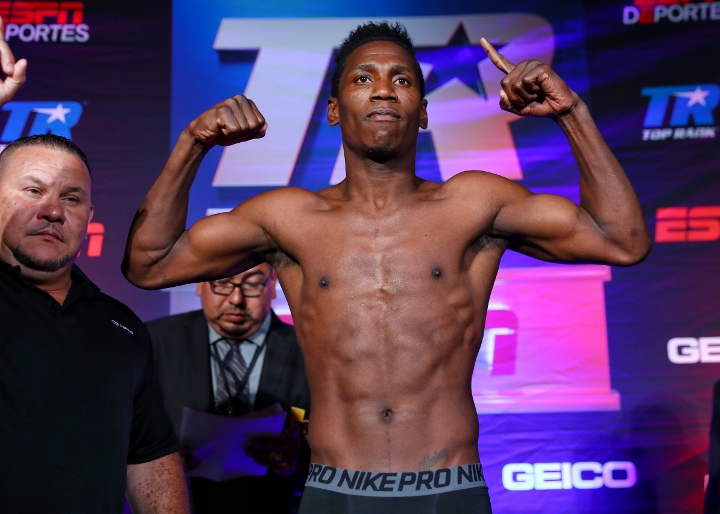 Abreu was given two additional hours to come back to the scale at the 147-pound limit, but he weighed exactly the same amount, 150.2 pounds, when he weighed in again. Nevertheless, the Ennis-Abreu bout will open Showtime’s telecast, which is scheduled to start at 9 p.m. ET/6 p.m. PT.

The winner between Lubin (22-1, 16 KOs), of Orlando, Florida, and Gausha (21-1-1, 10 KOs), a 2012 U.S. Olympian from Cleveland, will become the WBC’s mandatory challenger for whoever wins the Jermell Charlo-Jeison Rosario title unification fight next Saturday night. Houston’s Charlo (33-1, 17 KOs) and the Dominican Republic’s Rosario (20-1-1, 14 KOs) will fight for Charlo’s WBC and Rosario’s IBF and WBA titles September 26 in the main event of a Showtime Pay-Per-View event at Mohegan Sun Arena.

Lubin and Gausha were supposed to box last October 26, but Gausha withdrew from that bout due to a hand injury. Lubin instead defeated Nathaniel Gallimore (21-5-1, 17 KOs) by unanimous decision in a 10-round main event at Santander Arena in Reading, Pennsylvania.

If Lubin and Charlo win their upcoming bouts, Lubin would again become Charlo’s mandatory challenger again. Charlo knocked out Lubin with one punch in the first round of their mandated match in October 2017 at Barclays Center in Brooklyn.

Lubin is 4-0 since suffering his only professional defeat.

Nyambayar was supposed to meet Mexico’s Eduardo Ramirez (23-2-3, 10 KOs, 1 NC) in a 12-round WBC eliminator. Ramirez withdrew from that fight late last month for undisclosed reasons.

The 28-year-old Nyambayar will fight for the first time since Gary Russell Jr. (31-1, 18 KOs) beat him by unanimous decision in their 12-round, 126-pound title fight February 8 at PPL Center in Allentown, Pennsylvania. Breedy beat Titus Williams (9-3, 4 KOs) by sixth-round technical knockout in his last fight, December 7 at Barclays Center.

That's that BS! I hope Boots punishes him! Let's Go!

Abreu is typically pretty durable. Went the distance with Kavaliauskas and Besputin. Would be a nice statement if Boots stops an Abreu who missed weight.

Juan Abreu has fought some hard punchers, and hasn't been knocked out yet. He's coming in over the weight limit, I don't know if he's ever missed making the contracted weight for a fight in the past. Fighters who don't…