Joshua: Once Wilder-Fury is Over, They Can Start Mentioning Me

Last Saturday night in Saudi Arabia, he got back to business when he reclaimed his belts with a twelve round unanimous decision over Andy Ruiz.

In June, the goal of unification looked like a dream when Joshua was dropped four times and stopped in the seventh round by Ruiz at Madison Square Garden in New York City. 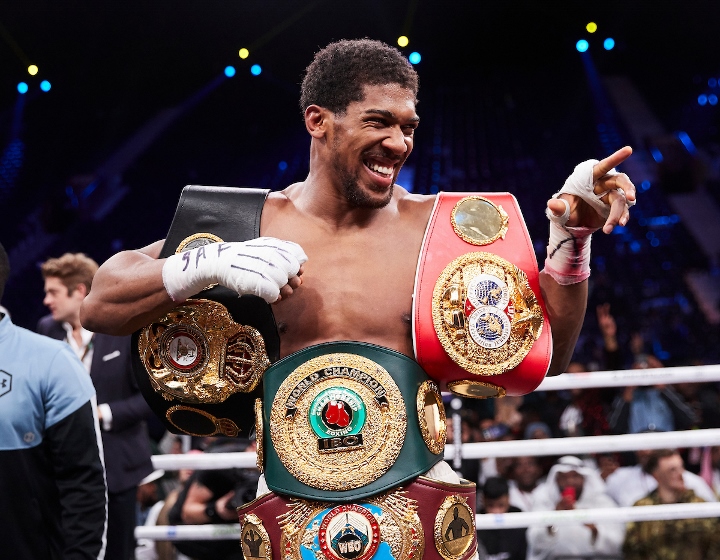 At the moment, WBC heavyweight champion Deontay Wilder is scheduled to face Tyson Fury in a rematch on February 22.

Joshua has two mandatory obligations - with the WBO ordering him to face Oleksandr Usyk and the IBF leaning on him to face Kubrat Pulev.

"Looking so far ahead it can be a blurry vision looking that far out," Joshua told BBC Sport.

"Sooner or later I will be looking directly at the undisputed championship of the world. If the opportunity presents itself I will fight Wilder and Fury. Wilder has a fight with Fury in February. Once that is out of the way they can start mentioning my name.

"I can't keep on fighting all the champions, the best in the division and then other people who say they want to step up don't step up. All challengers are welcome to take on this current unified champion."

As BoxingScene.com previously reported, Joshua is heading in the direction of potentially defending his belt against Pulev at Tottenham's new 60,000-capacity stadium.

"It would be mega," Joshua said. "Looking at how many people came out here shows there is still a big interest in the heavyweight division, especially now we are taking the belts back. Sometimes it would be better against a Brit, but if not I follow the mandatories and defend them that way."

[QUOTE=Robertthebruce;20250972]Wilder was getting revenge for refusing to fight him instead of Povetkin last year and turned down the 50m he asked for. AJ showed his true puszy self that time so why should Wilder fight AJ when he says? AJ…

[QUOTE=kafkod;20252240]Yes, of course they can! It's impossible to completely prevent concussions from happening in a sport where the objective is to punch your opponent in the head as hard and as often as you can. But a fighter can significantly…

[QUOTE=Ake-Dawg;20252220]There is literally no science to back your statement up. [B][I]You think concussions sustained from punches can be avoided by being in better shape?[/I][/B] Amir Khan just needs to work out more?[/QUOTE] Yes, of course they can! It's impossible to…

[QUOTE=kafkod;20252178]Fitness level is one of the main factors affecting punch resistance. A fully fight fit boxer will take punches better and recover faster from the effect of a punch than the same fighter when he isn't fully fit.[/QUOTE] There is…

[QUOTE=Ake-Dawg;20252132]I guess that's why the super fit guys never get knocked out or why AJ got knocked down repeatedly by Ruiz. He wasn't fit or strong. Maybe you're conflating weight cut effects with a lack of fitness and strength. [B][I]There…