Joshua: Ruiz Was The One Who Put His Name On The Contract

Several others had already heard about Jarrell Miller’s initial failed drug test by the time the overnight breaking news made its way to Anthony Joshua the following morning.

It didn’t matter to the unbeaten, unified heavyweight titlist what happened or when it first happened; he had a far more important inquiry.

“I just asked Eddie who was next,” England’s Joshua (22-0, 21KOs) recalled of the interruptions to his planned U.S. debut, which will come June 1 at Madison Square Garden in New York City and streaming live on DAZN USA. 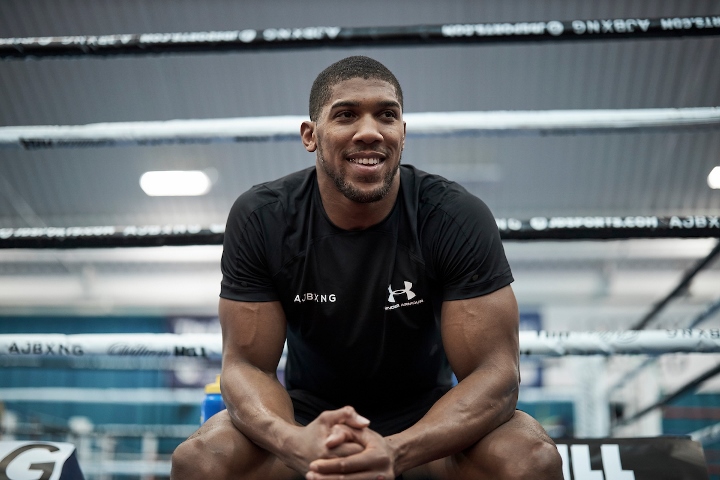 Joshua, of course, was due to face Brooklyn’s Miller for the event which had already sold more than 15,000 tickets by the time the drug testing follies were made public in mid-April. Instead, he will face California’s Andy Ruiz, who answered the call mere days after scoring a 5th round knockout of Alexander Dimitrenko on April 20.

The fleshy but skillful heavyweight wasn’t the first choice, but ultimately the easiest with which to negotiate terms.

“When we looked at it, the first opportunity was Luis Ortiz because he was the most credible,” Joshua noted of the selection process during a recent media conference call to discuss the event. “This is a massive event at Madison Square Garden. Miller made sense (born and raised in Brooklyn, NY), so we needed a big name who’d been at the world level and Ortiz fit the bill. But he turned it down.

The next one was (WBA “Regular” titlist and Joshua mandatory challenger) Manuel Charr… the thing with Ruiz, he was the one who put his name on the contract.”

Despite the brief period in finalizing an opponent, Joshua remained tucked away at training camp for what will be the 7th defense of at least one alphabet title.

The 2012 Olympic Gold medalist claimed the IBF strap in a 2nd round knockout of then-unbeaten Charles Martin in April 2016. He would add three more belts along the way—two in a scintillating 11th round knockout of Wladimir Klitschko in their April 2017 war and the WBO title in a 12-round decision victory over then-unbeaten Joseph Parker in their slow-moving unification bout last March.

New Zealand’s Parker is the only boxer to claim a win over Ruiz, although their Dec. 2016 vacant title fight in Auckland could have gone either way on the scorecards. Ruiz has since rebounded with three straight wins ahead of his second title fight.

“Ruiz is a good challenger and he’s been at the world level before,” notes Joshua, who is coming off of a 7th round knockout of Alexander Povetkin last September in front of 80,000 at Wembley Stadium in London. “When he fought Parker, he wanted to win.

“When they fight me, they want to knock me out.”

[QUOTE=Boxingfanatic75;19775140]Something you may have missed about my list is that with the exception of one it is champ vs champ or champ vs former champ. However, if I had been Ortiz I wouldn’t have taken 80/20. I’d have taken 70/30.[/QUOTE]…

[QUOTE=Boxingfanatic75;19771614]Frazier and Muhammad Ali each earned $2.5 million for their heavyweight title fight. —Heavyweight champion George Foreman earns $5 million and the former champion Ali earns $5.45 million for The Rumble in the Jungle. —Holmes and Cooney made 10 million…

[QUOTE=whoseyourdaddy;19770183]Why are you so mad with Andy Ruiz? you know well but you're in denial, that Ortiz price himself out of the fight, he was offered 5-7 million and he wanted 10. Him, Wilder and even Fury cant draw flys…

[QUOTE=BangEM;19770163]Your grammar is terrible even for American standard since most of you don't seem to be the sharpest tool in the shed. You're mostly zombies who need to dragged by the ears, before you can discern anything. So, I guess…