British superstar Anthony Joshua admits that "in hindsight" he would not have allowed Andy Ruiz to pose with the world heavyweight belts before their fight.

Two days before their June 1 bout, Joshua allowed Ruiz to hold the world titles at the final press conference. Once the fight came around, Ruiz captured the WBO, WBA, IBF, IBO world titles by dropping Joshua four times for a seventh round stoppage at Madison Square Garden in New York City.

"In hindsight, I would probably tell my fighter, as a psychological thing: 'don't give them away'," Joshua said on AJ: The Untold Truth. "I always said previously that the belts didn't represent me. I was responsible, and a champion, before I had those belts. The belts can't dictate who I am, as a man. The belts can go but I still have a championship mind-set. Boxing means, to me, more than the belts. Boxing is about building a championship mindset." 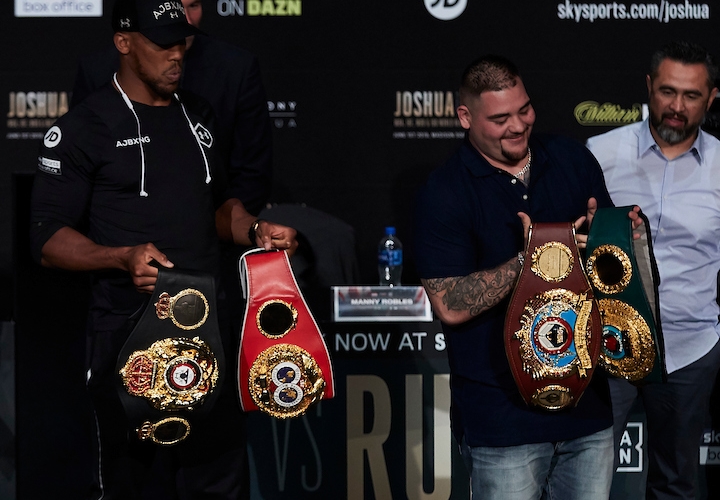 Joshua also rejected some of the conspiracy theories in the shocking defeat.

There are some who claimed that he looked extremely nervous as he walked to the ring and gave off the wrong kind of body language.

"I was so relaxed," Joshua said. "I don't see boxing as pressure. People make more of it than I do, which is why I'm really calm walking to the ring."

And he also denied being knocked out and/or knocked down during a sparring session as the contest neared.

"Everyone wants to be famous, rather than a good fighter," Joshua said.

"Silly stories about knocking me down. You can't even enjoy your training and work on things without someone making up false allegations, and trying to get five minutes of fame.

"You bring someone into your training camp to do them a favour by paying them, nothing like [the knockdown rumour] has happened, you beat them up in every round, then they go and do an interview. There is a lot of envy, and not a lot of realness."

It’s his Nigerian superstitious voodoo heritage coming through, yep. I’ve seem superstitions in many countries, and many religions. Ruiz has his Mexican voodoo, which is obviously stronger. I got my Mexican Jew superstitions/traditions... AJ needs to go get ready for…

Yea he's definitely not unlikable he can be charming and nice, maybe sometime boring but his line of thinking has just always been off to me. Who am I to say though the dudes a gold medalists and former unified…

[QUOTE=KING5TWENTY;20001142]Never been a fan of Ajs odd personality, everything he says or thinks is just off putting[/QUOTE] If you watch enough video of his "ring side chats" me-- I don't see what it is you see. I am NOT "big…

Joshua LET ANDY HOLD his belts as gesture and to give AR "good memory" of .....getting close to the Top.... Joshua wasn't thinking of LOSING UNTIL...day of match? Time pre in his dressing room? Day before the match? Three days…

[QUOTE=P4Pdunny;20001806]AJ can't win when he's being nice, or when he's speaking his mind. He needs to just focus on himself, training and correcting his flaws and trying to get the belts back.[/QUOTE] Can he do it? We don't know. He…