“I can’t wait to get back in the ring,” Joshua said in a press release. “The end of March feels like a long time ago now. Povetkin is a serious challenge that I will prepare meticulously for. He has serious pedigree, and only a fool would underestimate what he brings to the table.” 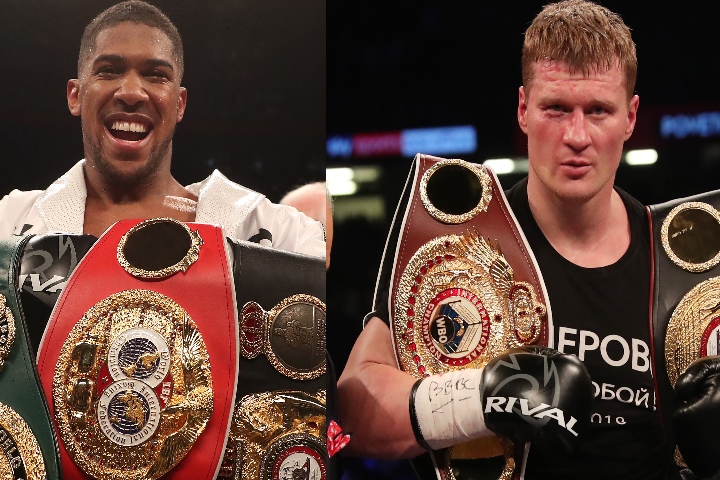 In his last fight, the 28-year-old British superstar defeated New Zealand’s Joseph Parker (24-1, 18 KOs) by unanimous decision March 31 in Cardiff, Wales. Joshua added Parker’s WBO title to his IBF, IBO and WBA crowns when he out-pointed Parker in their 12-rounder at Principality Stadium.

“Training hasn’t stopped for me,” Joshua said, “but the next 10 weeks ahead will be intense, both mentally and physically. I will push myself to breaking point to make sure I am in peak condition for another huge night for British boxing at Wembley Stadium on September 22.”

The 38-year-old Povetkin, a former WBA heavyweight champ, knocked out England’s David Price (22-5, 18 KOs) in the fifth round of his last fight. The Russian contender’s victory over Price was part of the Joshua-Parker undercard.

“The battle for the world title has always been my goal,” Povetkin said. “I fought for the moment to face the strongest in the world, and on September 22 I get my opportunity. Anthony Joshua has four belts and I want them all. I’m glad that our fight will finally take place. The meeting of two Olympic champions in the ring is destined to be a breathtaking event.”

Povetkin has lost only a unanimous decision to former champ Wladimir Klitschko (64-5, 53 KOs) in October 2013 in Moscow. In the past two years, Povetkin twice has tested positive for performance-enhancing drugs.

[QUOTE=juggernaut666;18942742]Wilder wasnt willing to face him bc he HAD to face him. If you put ANY Joshua opponent against Wilder only his dumbed down fan base can create how they are a good opponent , all the while when Joshua…

[QUOTE=PunchyPotorff;18946247]Quote: Originally Posted by PunchyPotorff View Post Wait, so you actually think Povetkin is some pushover? Interesting. BTW, I think Joshua wins, but I also think Povetkin will have some wrinkles to serve AJ along the way. We'll find out…

Quote: Originally Posted by PunchyPotorff View Post Really looking forward to this one and Breazeale/Wilder. Two quality fights with 4 top fighters involved. And BTW, to the Povetkin haters... Wilder would NOT fight Whyte in England on a Joshua undercard.…

Quote: Originally Posted by PunchyPotorff View Post Wait, so you actually think Povetkin is some pushover? [QUOTE=champion4ever;18943282]Affirmative, he is going to come right at Joshua and Anthony has exceptional timing and precision like counter punching ability. Joshua's style is all…