Joshua: Ortiz Will Be Quicker To Fight Me Than Wilder Would

Joshua-Wilder is the biggest boxing match that can be made among active fighters and represents the largest potential payday for Joshua. The British superstar still wouldn’t be terribly disappointed if Ortiz knocks off Wilder when they fight again sometime in September.

“I think Ortiz will be quicker to fight me than Wilder would,” Joshua said Thursday before a press conference at The Beacon Theater. “So, it’s not a bad thing, you know? It’s not actually a bad thing. So yeah, the division – it’s impossible for Wilder to probably stay champion for the rest of his time. He’s had close fights with [Eric] Molina, with [Tyson] Fury, with Ortiz. He’s had some like close fights with certain people. So, you know, it’s coming close to a time where that belt should change hands.” 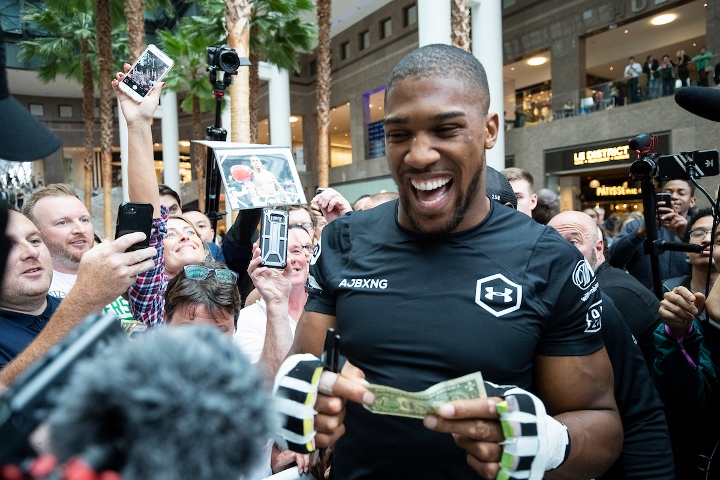 Wilder (40-0-1, 40 KOs) announced Tuesday night through social media that he and Ortiz (31-1, 26 KOs, 2 NC) have agreed to fight again. Ortiz hurt Wilder during the seventh round of their first fight, but Wilder recovered, dropped Ortiz twice during the 10th round and stopped the Cuban southpaw in March 2018.

Joshua wants Wilder’s WBC heavyweight title, but he emphasized Thursday that the strength of his legacy isn’t dependent upon fighting the hard-hitting, Alabama-based knockout artist.

“It’s not so much about Wilder, you know?,” said Joshua, who’ll box Andy Ruiz Jr. (32-1, 21 KOs) on Saturday night at Madison Square Garden. “It’s more about what I can achieve, because when we look at what we’re doing, in terms of like working outside of boxing, commercializing the sport in our own field, even if I fought Ortiz it could be a fight of the century anyway, because it’s [for] the undisputed [title]. Wilder’s still building his profile and stuff like that, so it’s not so much about Wilder. It’s that undisputed.”

Joshua’s fame and fortune aside, the IBF/IBO/WBA/WBO champion completely respects the importance of adding the one heavyweight title he doesn’t own to his collection.

“It could be Ruiz and Ortiz,” Joshua said. “It’s still a massive fight for the undisputed [title], I think. It’s just that we’ve worked tirelessly to build the profile outside of boxing. So, when it does happen, it’s already at the pinnacle of where it should be commercially. We’re not like, ‘Now the undisputed is here, let’s promote it.’ We’ve been promoting it for years anyway.”

DAZN will stream Joshua-Ruiz as the main event of a nine-bout card Saturday night.

[QUOTE=hitking;19784439]I really like AJ and hate saying negative things about him. Because there’s really nothing to dislike about the guy. But his fans are so dumb and say such stupid s.hit, it’s hard not to call them on it. What…

No AJ you all don’t fight the top guys. The issue is you.

[QUOTE=Thebrownbear;19785122]Yeah, like Prince Charles Williams [B]Most of Joshua's fights are boring[/B]. I had to ***** slap myself to stay awake during the Parker and Takam fights. Afterwards I cursed myself out for making time to see some of the lowest…

[QUOTE=Thebrownbear;19784382][I][/I] Sorry, but as a boxing fan for close to 60 years Joshua has been less than impressive. He stunk up the joint with fights against the likes of Parker and blown up cruiserweight Takam. He was life and death…

Joshua: Ortiz Will Be Quicker To Fight Me Than Wilder Would [B]But aj won't be quick to fight either of them....LMMFAO![/B]