Anthony Joshua says he wants to fight Tyson Fury next and says the fight will happen as long as Fury is serious about it.

Joshua, the WBA, WBO, IBO and IBF heavyweight champion, did not call out Fury’s name after his knockout victory over Kubrat Pulev this month and says he is interested in the fight taking place not the endless talk about it.

“If this is the fight that people want to see – whether it’s in the UK, in Saudi Arabia or Africa – I just hope the fight gets done.” Joshua said. “I put too much energy into this stuff. I just want to fight. I’m not about talking and creating false narratives.

“I promise you this: I will put in a serious offer to fight Tyson Fury and if he’s serious himself, he will take it. If he’s not I will fight [Oleksandr] Usyk and leave it there.” 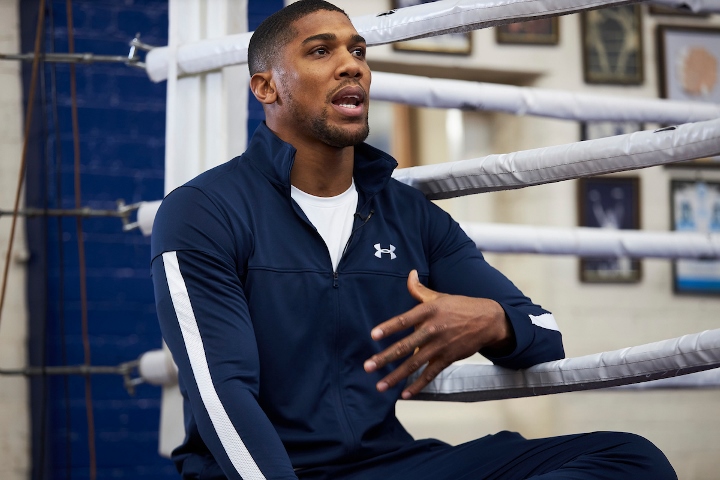 Eddie Hearn, Joshua’s promoter, has suggested that it could happen in late May and abroad deal, agreeing a two-fight deal with each boxer being paid 50 percent of takings for the first fight.

Joshua, said that his management company, 258 Management, had reached out to Fury’s team and he said he was glad at Hearn’s suggestion that there should be no obstacles to the fight happening.

“I'm serious about the fight so when I announce it you'll know it's real,” Joshua said. “That’s why I’m taking my time – because there has been a lot of back-and-forth for years. I've been chasing this round to undisputed and when the time is right, I’ll announce it and I'll have my mind fully focused on the job at hand.

“After the Pulev fight, I didn’t want to do any interviews. Less talk and more action. I stood by that. I want to just get in there and fight. I want to be walk out and be known as someone who is a true warrior to this sport.

“I’ve fought many champions before so it’s obvious to see we’ve done business with world champions before. It’s no different with Fury, he should take this fight with both hands. It’s a split down the middle, there’s no one benefitting apart from the fans at the end of the day. I believe I’ll win.

“258 Management are reaching out to MTK Global and Frank Warren, Tyson Fury’s management team, and it’s just so we can start having conversations about the logistics and exactly what it will take to make this fight happen.

“But I promise you the road to undisputed is something I’m keen on. When it was Deontay Wilder that was my focus and he admitted we gave him lucrative offers that he turned down. Now it’s Tyson Fury and that’s my pure focus. The offers will be made, substantial offers.

Joshua’s motivation for the fight is, he says, a need to do the best fight for the fans, he said.

“I feel like the cries from the public are just for me to fight Tyson Fury,” Joshua said. “I am the sort of guy who will let my team just put a social media poll and whatever the fans vote, I will do.

“There is nothing more in it than me wanting to compete against the best. If that is Tyson Fury, then fine. If they want me to fight Usyk, and get him out of the way, then fine. I believe I will beat Usyk and then Tyson Fury can happen at the end of the year.

“Either way, I am just doing my next couple of fights next year on what the public wants me to do.”

Joshua was talking to media on a day he announced that he was had made a “substantial” donation to help amateur boxing clubs across Great Britain get through the coronavirus pandemic. The money will be donated to the national federations in England, Scotland and Wales and then distributed to clubs in need.

Joshua was at his old amateur club, Finchley, in north London, although he pointed out that he Fury and all Britain’s Olympic medal-winners or professional world champions were products of the amateur club system.

“Without the amateur system, the grassroots clubs, there are no Olympians and without them there are no world champions in the country,” he said. “Boxing produces some of the best athletes this country has ever seen.

“I’m in the grassroots gym and it’s struggling. There was £300 million given to sport and in grassroots sport, £3,000 makes a difference. Hopefully, this will raise the eyebrows of the people in power and next time they will put some money towards boxing.”

It was at the Finchley ABC gym that Joshua and Fury shared a ring for the only time, during a sparring session in 2010 when Fury was already a professional and Joshua an unknown amateur.

Fury admitted at the time that Joshua had shocked him and got the better of the session, but Joshua admits he was inspired by Fury’s promise to give him his watch is he knocked him out.

“All I wanted was his Rolex watch,” Joshua said. “He said before that spar ‘if you can beat me up or knock me out, you can have my Rolex watch’.

“I was hungry then and I am even hungrier now. That is what I did to him then, it was a good spar when I was 20 and didn’t really know too much. Now, I have some boxing IQ and passion, I know it will be a great fight.

“There was a Rolex but now there is an even bigger pot of gold at the end of this rainbow and I want to take his head off his shoulders when that fight happens.”

[QUOTE=ShoulderRoll;20980213]Working as a secretary doesn't qualify as experience in the legal fields.[/QUOTE] [url]http://www.neimanmediation.com/how-private-is-mediation/[/url] “There is no such thing as a “gag order” in mediation, meaning either party can leave the session and talk to others about what was discussed. To…

[QUOTE=REDEEMER;20980208]Fury has spoken ,Wilder has no say why would he speak ,about what ? Besides saying he’s moved on and mentioned Whyte ,Kownacki , and Helenius ? If you know law you know gag orders aren’t previous to mediation. I’m…

[QUOTE=FLY TY;20979997]Wilder and Fury have gag orders. Why has no one spoken publicly then?[/QUOTE] Fury has spoken ,Wilder has no say why would he speak ,about what ? Besides saying he’s moved on and mentioned Whyte ,Kownacki , and Helenius…

[QUOTE=REDEEMER;20976837]That’s false . A party is not hit with a gag order in mediation. They are free to say what they want publicly. The hard truth for you guys is Wilder cannot do much but stay silent because there’s not…

[QUOTE=Kezzer;20973997]What you talking about? Have you not seen his list of opponents compared to fury, wilder, etc? Couldn’t be further away from what you said. His ‘late replacement” standard is Takam and Ruiz. They are probably top3 opponents on any…