Joshua: I Got Beaten To A Pulp; But I Believe I’ll Go Down As This Generation’s Great

Nearly a year later, Anthony Joshua still won’t try to rationalize what Andy Ruiz Jr. did to him in their first fight.

The British superstar simply attributes his poor performance to Ruiz being the better man in that unforgettable upset at Madison Square Garden in New York. England’s Joshua was more than a 20-1 favorite over Ruiz, but a resilient Ruiz got up from a third-round knockdown, dropped Joshua twice apiece in the third and seventh rounds and produced one of the most stunning results in boxing history. 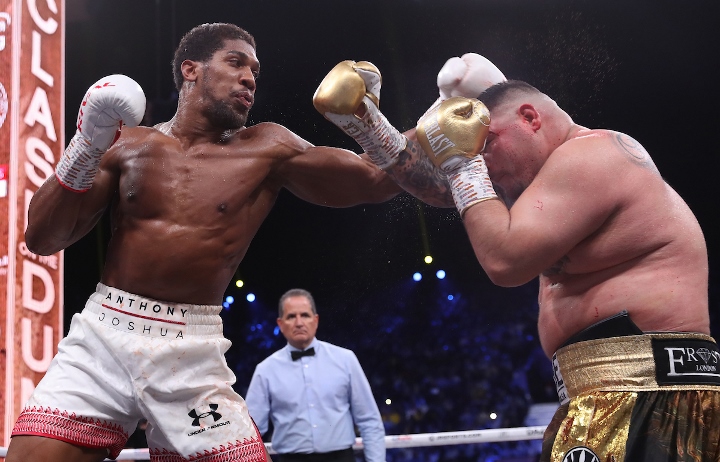 The 30-year-old Joshua bluntly recalled what happened to him in his U.S. debut last June 1 during a recent interview with IFL TV for its YouTube channel.

“I got beat,” Joshua said. “I was shook. Everything that you saw in that fight was what I was going through. It’s tough. It’s a hard game. I got beaten to a pulp and I had to kind of pull myself back together. And that’s just how it went. And now they’re gonna see the rebirth of me because, you know, everyone writes me off in this boxing division. You know, everyone wants to write me off. But I believe that I will go down as, you know, this generation’s great.

The muscular Joshua (23-1, 21 KOs) slimmed down for his immediate rematch with Ruiz (33-2, 22 KOs). Coming in about 10 pounds lighter for that bout than he did for their first encounter enabled the 6-feet-6 Joshua to out-box an out-of-shape Ruiz over 12 rounds.

Joshua regained his IBF, IBO, WBA and WBO titles by clearly winning a unanimous decision December 7 in Diriyah, Saudi Arabia. Some critics chastised Joshua for being overly cautious versus Ruiz in their rematch, but he has made no apologies for ensuring that he did what was necessary to regain his titles.

Joshua is expected to make a mandatory defense of his IBF title against Bulgaria’s Kubrat Pulev (28-1, 14 KOs) in his next fight. The Joshua-Pulev fight was scheduled for June 20 at Tottenham Hotspur Stadium in London, but it has been postponed indefinitely due to the COVID-19 pandemic.

[QUOTE=Bunch Pag;20588940]After Pulev, what you're saying You're looking at around another 10 fights which I don't think AJ has in him.. There's a very good chance that Fury could possibly retire Wilder. After a back and forth drawn out saga…

[QUOTE=Get em up;20587767]I'm not necessarily a Joshua fan but the dude is a class act and like it or not he did what he had to in order to win his titles back. I would've liked for him to go…

Yes because being beaten to a pulp translates to greatness.

Do generation greats get dominated and beaten up by morbidly obese men?

[QUOTE=Bunch Pag;20590469]Hearn said that said that other day, Ajs got a Mando deal with Pulev next. For me Aj has about 5/6 fights left in him provided he wins. That includes 2 with Fury.. I don't think there's anybody on…