Joshua: As a British Fighter - I Don't Get Respect From World Media!

IBF, IBO, WBA, WBO heavyweight champion Anthony Joshua believes that he, as a British fighter, does not get the same level of respect as fighters from other countries - at least when it comes from the world media.

"[Last year] was a difficult time in my career," Joshua said to JD Sports. "Last year was a real tough year.

"As a British heavyweight fighter we never get the respect from the world media, which is governed by America to a certain degree, because we're British. Americans are going to take care of Americans. So when I lost… you take challenges, the goal is to win 100 percent." 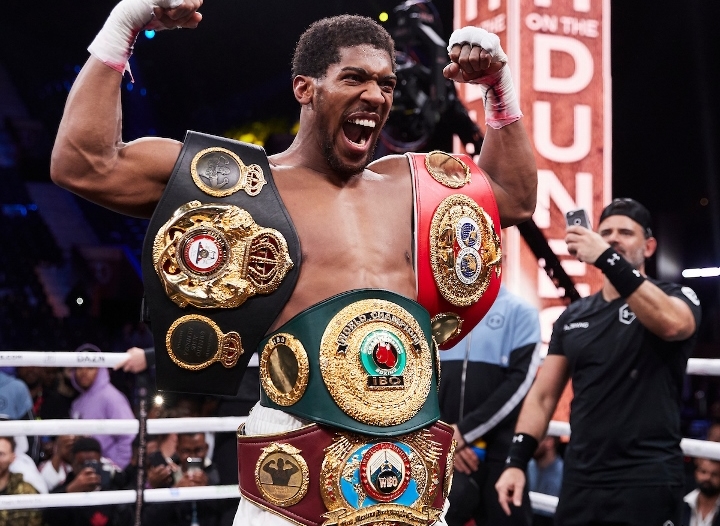 Joshua felt he was fully written off when he suffered his shocking defeat at the hands of Andy Ruiz in June 2019.

He was dropped four times and stopped in the seventh round.

The second time around, in December 2019, Joshua dominated Ruiz over twelve rounds for a unanimous decision.

"I felt, and I still stand by that today, that everyone had written me off. So I said 'cool'. They're telling me 'man, Josh shouldn't go in there for the rematch, he's crazy'," Joshua told JD Sports.

"I'm talking about some of my idols and stuff like that. So the best thing about Saudi Arabia was proving to myself that no matter what the idols tell me or the experts, no one can go against the gut feeling that I have.

"That's why at the end of the fight there's a clip where Eddie's jumping, my manager Freddie's jumping, and I'm kind of standing there. I remember when I said that when I win 'everybody must bow to me'. So it was like my emperor moment. I said what I was going to do, so talk the talk, walk the walk. That was the best thing about Saudi."

Joshua was scheduled to face mandatory challenger Kubrat Pulev on June 20th - but the contest was postponed due to the ongoing coronavirus pandemic.

"Even though there is a massive negative effect of what's going on, the positive you have to take from it is the quality time you're spending with your family," Joshua said.

"So aside from the day to day hustle and bustle and training, I have prioritised the attention that I'm spending with my family, so that's been a priority of mine."

[QUOTE=P4Pdunny;20505713]Wilder has complained about the media a few times. A good chunk of these boxers will do so if not already.[/QUOTE] But never in Wakanda! They love windmill there. He gets to sit at the big table with the black…

[QUOTE=P4Pdunny;20505718]Parker's lucky that "bite" stopped him from getting stopped by Chisora. People really do see what they want to see.[/QUOTE] Damn straight! If Parker had gone in there having lost time in training and down on energy after recovering, Chisora…

[QUOTE=Elastic Recoilz;20504558]Lets look at all of his championship wins... right firstly Charles Martin for the IBF - everybody knows Eddie Hearn payed off Charles Martin to lay down for AJ, he could've easily got up in the 2nd round but…

[QUOTE=pollywog;20504728]The man at number 2 behind Fury is... Joseph 'OILSKIN' Parker. Fast Eddie knows that, Bob Arum knows that, Al Haymon knows that and even Tyson Fury, Dillian Whyte, Andy Ruiz and Anthony Joshua know that. Wilder doesn't, but if…