LAS VEGAS – Freddy Fonseca didn’t deliver on all the trash he talked to Joseph Diaz Jr. this week.

Diaz dominated Fonseca, scored a knockdown during the sixth round and stopped Fonseca in the seventh round Saturday night at T-Mobile Arena. Fonseca’s trainer threw in the towel, which made referee Kenny Bayless stop their scheduled 12-rounder at 2:07 of the seventh round.

“I felt really good at 130,” Diaz told DAZN’s Chris Mannix after his win. “This is my second fight at this weight. I felt very comfortable at this weight. Like I said during the press conference and my previous interviews, 126 was just way too hard for me, man. I wasn’t able to showcase the power that I actually have. Now I’m able to showcase my skills, my defense, my head movement, everything, man. I feel like I’ve got it all at 130. Tevin, where you at?” 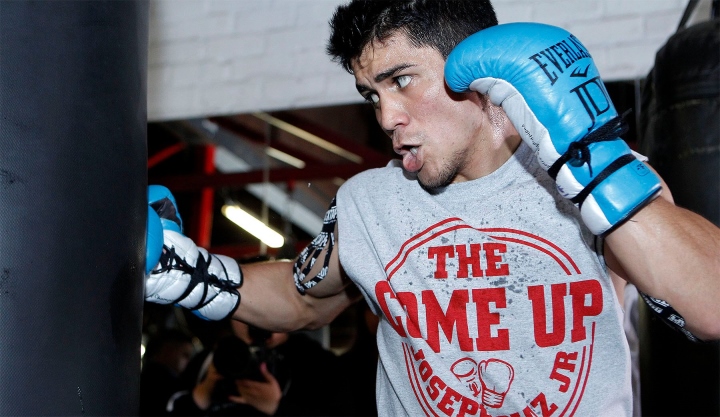 Diaz referred to IBF junior lightweight champion Tevin Farmer. Diaz engaged in trash talk throughout this week with Farmer and hopes to fight the Philadelphia native next.

In this fight, Diaz dropped Fonseca with about 20 seconds to go in the sixth round. Diaz landed a partial rabbit punch before hitting Fonseca with a straight left hand that hurt him.

A few seconds later, Fonseca went down to both knees. Bayless called it a knockdown, even though Diaz’s right hand hit Fonseca’s back and grazed the back of his head.

Fonseca got up and made it to the end of the sixth round.

Once the seventh round began, Diaz continued landing combinations. Fonseca’s trainer eventually had seen enough, and threw in the towel.

In the fourth round, Diaz continued to land combinations and out-work Fonseca, who mostly missed Diaz drilled Fonseca with a hard right to the body at about the 35-second mark of the third round.

Diaz backed up Fonseca with a combination when there were about 20 seconds to go in the second round. Diaz displayed his superior speed and skill immediately, as he opened up with an array of power punches in the first round.

[QUOTE=Mister Wolf;19716220]Ortiz better stay away from Prograis, Taylor, Baranchyk, and Hooker.[/QUOTE] Who are all those tomato cans??? Ortiz is better...

[QUOTE=Vlad_;19716055]Nope, I will not praise it as a great win for GGG, just like I never praised his win against Vanes as something great. Don’t mix me up with your prejudices.[/QUOTE] Alright, my apologies then. Glad you're not a blind…