Joseph Diaz: Now That I'm At 130, I Feel Like I'm Fully Developed

He prepared as well as he could have for his first major title fight, but Joseph Diaz Jr. couldn’t quite figure out where the game plan went wrong versus Gary Russell.

It wasn’t until he missed weight for his next fight when it dawned on the 2012 Olympian what was holding back his career potential.

“At 126 (pounds), I was a good fighter, but something was missing,” Diaz (29-1, 15KOs) told BoxingScene.com of his featherweight run, ending with a 12-round points loss to Russell last Moay. “I felt like I was no longer carrying my power into the ring.” 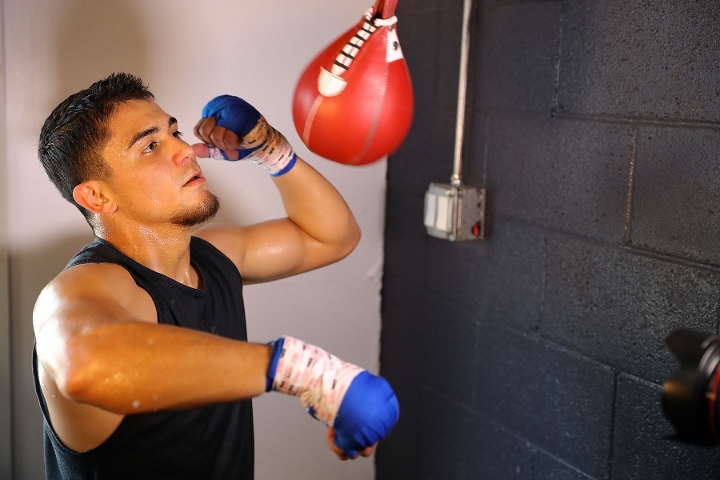 It showed in what was supposed to be his bounceback performance, which instead became a win in a non-title fight after coming in heavy for his unanimous decision victory over Jesus M. Rojas last August. It was enough to ignite a current three-fight win streak for the 2012 U.S. Olympian, and also enough of a tell-tale sign that a super featherweight run was in his future.

Diaz fights at 130 for the third straight time—all coming in 2019—as he faces Venezuela’s Jesus Cuadro (19-4, 14KOs) in a 12-round scrap Saturday evening in Mexicali, Mexico. It’s a risky affair, as Diaz is line for a shot at reigning 130-pound titlist Tevin Farmer later this year yet takes a fight that is his first ever in Mexico and versus an opponent who has never been stopped nor has he been handled even in defeat.

Still, the confidence he carries into each and every fight as a replenished athlete has him once again feeling like he can take on the world.

“Now that I'm at 130, I feel like I'm fully developed,” insists Diaz. “I'm a hungrier fighter, a stronger fighter and you will see the difference in the ring. I'm ready for all of the top challenges at 130 pounds.

I've been sparring guys that are 150, 147 pounds. I'm not even concerned about my chin. This guy said he's going to knock me out but I'm not worried about that at all. I just want to show everyone that I am a future world champion. That journey begins (Saturday) evening.”

This kid is one of my favorite prospects. Him and Virgil Ortiz.

[QUOTE=Griever0730;20072802]Hope he gets through this one good. Jojo is a solid well-rounded boxer & imo can give any of the champs at 130 a real fight & still win a world title at some point in his career. The loss…

Hope he gets through this one good. Jojo is a solid well-rounded boxer & imo can give any of the champs at 130 a real fight & still win a world title at some point in his career. The loss…