For the second time in three years, the hard-hitting Long Island light heavyweight beat a favored Philadelphia fighter. This time, he dropped and out-pointed Jesse Hart, a fighter Hopkins has mentored, by split decision in a 10-round main event ESPN aired from Hard Rock Hotel & Casino’s Etess Arena.

Smith knocked down Hart in the seventh round, which widened his win on the scorecards of judges Eugene Grant (97-92) and Joe Pasquale (98-91). Judge James Kinney somehow scored the fight for Hart (95-94), who spent the final three-plus rounds simply attempting to survive.

“I was a little worried there,” Smith said in reference to hearing ring announcer Jimmy Lennon Jr. state that the result was a split decision. “I was very confident I was gonna get the decision. But the one judge made me a little nervous in there. But you know, just with the knockdown and the hard shots that I landed, I deserved it.”

The 30-year-old Hart suffered the third decision defeat of his seven-year career. Before Saturday night, Hart had lost only a pair of close decisions to Mexico’s Gilberto Ramirez (40-0, 26 KOs) in 12-round, WBO super middleweight title fights.

Hart had hoped to avenge Hopkins’ career-ending, eighth-round knockout loss to Smith in December 2016 in Inglewood, California. Smith knocked Hopkins, the Hall-of-Famer that Hart idolized while growing up, out of the ring and out of boxing that night at The Forum.

Hopkins had given Hart advice during his training camp, but the former middleweight and light heavyweight champion didn’t attend the fight Saturday night.

The 30-year-old Smith, of Mastic, New York, rejuvenated his career in his first fight since losing a one-sided, 12-round unanimous decision to WBA light heavyweight champion Dmitry Bivol 10 months ago in Verona, New York. Smith buzzed Bivol (17-0, 11 KOs) at the end of the 10th round, but the Russian champion otherwise out-classed him in their fight at Turning Stone Resort Casino. 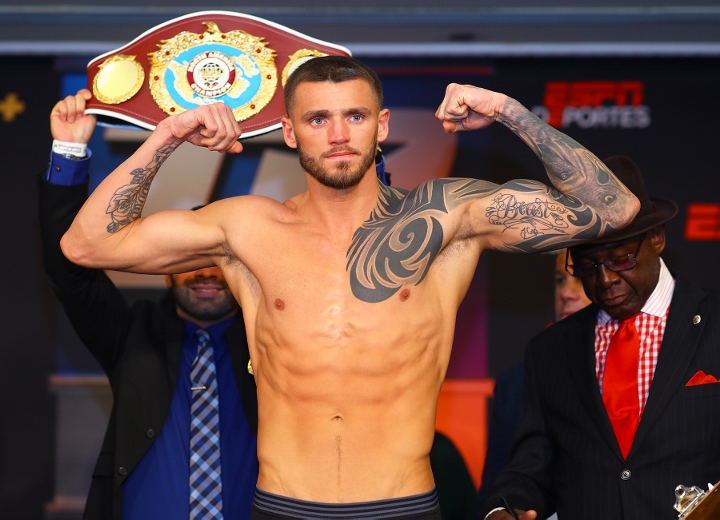 Hart claimed afterward that he entered the fight with an injured right hand.

“I hurt my right hand a week ago,” Hart said. “You can see it’s messed up. I don’t wanna make no excuses because Joe fought a great fight. I hurt the hand in my last sparring session and thought I could overcome that. Credit to Joe for doing what he had to do.”

Hart moved and held his way in the 10th round to surviving until the final bell. Smith tried his best to finish an opponent he’d hurt multiple times, but he couldn’t do it.

Smith rocked Hart with a right hand in the ninth round, when Hart began bleeding from a cut around his left eye. Hart landed a short left hand that knocked Smith off balance late in the ninth, but Smith came charging right back after him.

Hart started the eighth round on unsteady legs because Smith hurt him badly and dropped him in the seventh round. Hart did his best to survive in the eighth, but he couldn’t keep the ever-aggressive Smith off of him.

Hart slipped and blocked most of Smith’s shots until the end of the seventh round. That’s when Smith caught Hart with a right hand to the side of Hart’s head that sent him to one knee.

Instinctually, Hart bounced right back to his feet and got into an exchange with Smith. Dock quickly separated them because Smith had scored a knockdown.

Smith attempted to finish. He landed a hard left hook just before the bell sounded, but Smith ran out of time.

“I thought I had him a few times,” Smith said. “But he was a little slippery. He tied me up well. I was looking to land the hook, the big hook inside after I hurt him. But he kept grabbing my arms and tying up, and he survived.”

Smith’s right uppercut connected early in the sixth round and backed up Hart, who caught Smith with a left uppercut toward the end of the sixth.

Smith had a knot under his right eye by the start of the fifth round. Hart hit Smith with jabs and right hands in that round, but Smith landed a left off the side of Hart’s head when he had Hart backed against the ropes.

Smith blasted Hart with several more power punches in the second half of the fourth round. He seemed to hurt Hart, but Hart fired back several hard shots to keep Smith honest as he plowed forward.

Hart had success with his jab and his straight right hand early in the third round. A right uppercut by Hart stopped Smith in his tracks in the final minute of the third round.

Smith caught Hart with a right hand out of a clinch early in the second round. A right uppercut by Smith and another right later in the second wobbled Hart, who held on to stop Smith from knocking him out.

Smith almost immediately challenged Hart to stand and fight in the middle of the ring. Hart didn’t take up Smith on his offer in the opening round, which he spent mostly moving around the ring and tying up Smith.

Smith connected with a left hook when he trapped Hart against the ropes in the first round, but Hart wasn’t affected by it.

Nine rounds later, Smith was back on the winning track in a fight he knew he absolutely had to win. As much as Hart wanted to win for himself and Hopkins, Smith needed a victory to remain relevant in the light heavyweight division.

“It was very personal,” Smith said. “My career was on the line here. I had to come here and prove that I belong.”

[QUOTE=Rossman;20321634]One judge based it on ring generalship and completely ignored aggression and meaningful punches landed. Hope we don't see him again.[/QUOTE] Smith walked Hart down the entire fight. What Ring Generalship did Hart display?

One judge based it on ring generalship and completely ignored aggression and meaningful punches landed. Hope we don't see him again.

It was good to see Smith take this. Never heard of Hart but he had heart(no pun intended)

[QUOTE=YoungManRumble;20320983]Oh don't get me wrong Jordan I know you got better experience/eyes for this and more knowledge than me and I honestly didn't notice it until pointed it. We eating some crow today for sure though. I knew he wouldn't…

[QUOTE=uppercut510;20319937]had a feeling hart was going to lose like this, im sure the ref who did that did it for betting purposes smh hart doesnt belong at 175[/QUOTE] Lol I feel like their fake game plan of stopping Smith or…