Joe Joyce: I'm Better Than Chisora, I Can Tire Usyk and Take Him Out!

Joe Joyce has warned Oleksandr Usyk that he will be facing a much better fighter than he beat seven years ago if they have a rematch for the vacant WBO heavyweight title next year.

Joyce, who knocked out Daniel Dubois on Saturday to claim the British, Commonwealth and European titles, could be in pole position to box for the WBO title against Usyk, the WBO’s mandatory challenger, if Anthony Joshua decides to drop the belt to pursue a fight with Tyson Fury.

Usyk is due to be next in line for Joshua after he faces Kubrat Pulev on December 12 and has indicated that he will not take a step-aside deal to allow Joshua to face Fury. Prior to Saturday night, the No 2 slot was filled by Dubois. 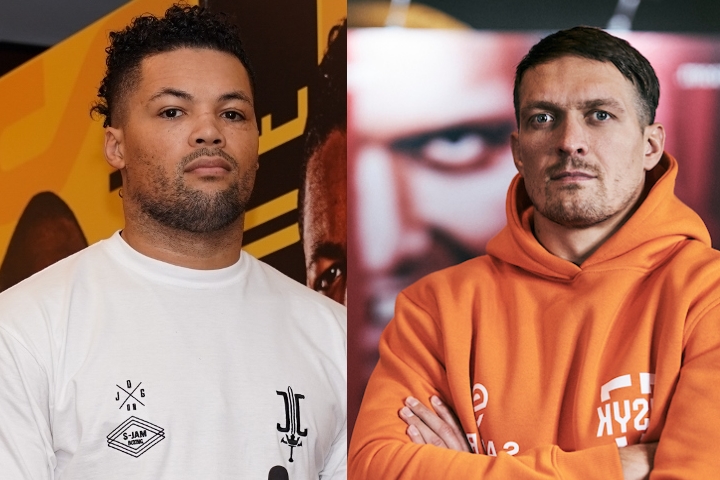 Joshua boxed Usyk in a match between British Lionhearts and Ukraine Otamans in the World Series of Boxing at York Hall in East London in 2013. At the time, Usyk was the reigning Olympic heavyweight champion, while Joyce had just inherited the No 1 super-heavyweight slot on the GB squad from Joshua.

Usyk won a unanimous points decision over five rounds – winning 50-45 on all five judges’ cards – but Joyce believes it will be different next time.

“The Warrens have said that title may be available, and I’ve taken his spot with the WBO, so that could maybe happen,” Joyce said. “Maybe not my next fight, but the one after that.

“A rematch would be amazing to fight him again for the world title. I’m a hell of a better fighter now. I’ve got better preparation, I’ve had more rounds. I can land more shots, tire him out and take him out.”

A rematch over 12 rounds rather than five would seem to suit Joyce more, as long as he could make his size advantage tell. He believes he would stand a better chance of beating him than Derek Chisora, who lost to Usyk at Wembley last month.

“Usyk is quite a small heavyweight, but I rate him, he’s got skill,” Joyce said. “It’s hard to hit him, but with my team I reckon I could take him because I’m a more experienced fighter.

“He’s put on some muscle, so he’s a little bit slower. I rate him because he’s got the brains and he’s got good footwork and head movement It would be a difficult fight, but one I want and one I could win.”

“I think I’ve got better footwork and I’m a better boxer than Chisora. I think it would be a good fight and I can’t wait for it to be made.”

Joyce said he was always confident of beating Dubois and said he stuck to basics to grind out the win.

“I’ve been working on with the team and following the game plan to stay out of trouble,” Joyce said. “I felt Dubois’s power, he hit me with some good shots. I just kept moving and using my boxing technique to keep him at bay.

“It was pretty close and I was happy he stopped it in the end because it’s better to live to fight another day because he’s young. There was no point bursting his heart anymore and he can fight again.”

The end, where Dubois took a knee, has caused controversy and Joyce said he hoped he would not have quit in such a manner.

“I’d go to the end unless I was getting pinged and there was no point in continuing,” Joyce said. “But I would prefer to go out on my shield rather than stop the fight like that.

“He’s good at giving a punch, but maybe not so good at taking a punch.”

At 35, Joyce has no time to waste, but he insists he is a fresh fighter, having not taken up the sport until his 20s.

“I don't feel much different than when I was 26, it's just one of them things you have to be smarter if you're training,” Joyce said. “If you've been training for so many years it is quite hard to stay motivated to keep doing the same thing but I love the sport and I'm constantly improving myself.

“I have the drive, especially when you have these big fights and shiny belts to box for.”

Even with Usyk being a sharp boxer, tough to connect on, I'd still give Joyce the edge to slowly wear down his foe and stop Usyk, late rounds. Usyk doesn't have the power to keep Joyce honest... else why did…

fight makes sense and has the potential to draw both hardcore and also casual fight fans interest I say make it that will be a bout worth watching between these two..

[QUOTE=Julian John's;20921251]And is actually a seasoned professional now he will slap Joyce around the ring for six round then the big lunbourus Brit will gass and get slumpkowski'd the backwards **** these dudes says is incredible[/QUOTE] Usyk definitely isn’t stopping…

[QUOTE=Vinnykin;20921422]Ouch........ some loser online thinks I am mentally handicapped......... good on you, you little troll. I hope that thinking I am ******ed brings you happiness :rofl:[/QUOTE] Stop talking utter nonsense and i will not take any pleasure in humiliating you…

[QUOTE=Boxing Goat;20921347]Like I said.....you are actually ret arded. You really are. Joyce is a lot slower actually. Being able to take a punch means little when you can't land punches.[/QUOTE] Ouch........ some loser online thinks I am mentally handicapped......... good…