Jesse Hart: Barrera is No Threat, He's Just Coming For a Check!

MGM GRAND, LAS VEGAS - Jesse Hart (25-2) is very confident going into his fight against Sullivan Barrera (22-2).  The fight takes place on Saturday night and will serve as the chief supporting bout underneath the Tyson Fury-Tom Schwarz main event. Both bouts will stream live on ESPN+.

After campaigning at 168 pounds for his entire career, Hart is making the move up to light heavyweight where Top Rank controls three of the four major titles along with former champion Eleider Alvarez and former super middleweight champion and Hart nemesis Gilberto Ramirez.

"I feel good. I feel stronger but I also feel a little heavy in a sense where my tempo is where it would be at 68, the tempo of my punches but overall I feel strong. I am ready to go," said Hart. 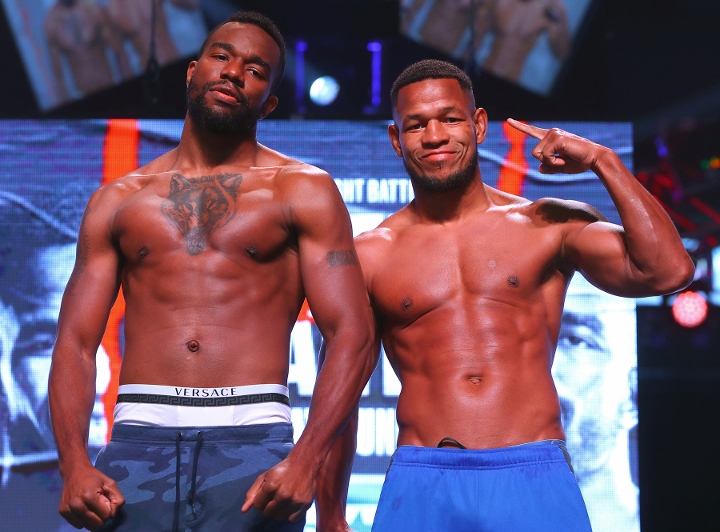 Barrera, who is a career light heavyweight, believes that the difference in size and punching power will be Hart's downfall.  However, Hart isn't worried about that and believes that his advantage in speed will nullify anything that Barrera brings to the table.

One big advantage Hart does have is in age.  At 29 years old, he is in the prime of his career while Barrera got a later start to his career after defecting from Cuba.

The Philadelphia native also revealed that he sparred with heavyweight prospect Sonny Conto to help him prepare for the move up in weight.  He doesn't believe that Barrera can bring anything better than what Conto brought to the table.

"37 years old against a 29 year old man coming to win. Listen, I didn't spar a 37 year old man. I didn't box a 37 year old man. I worked with young, strong lions in the gym, a kid like Sonny Conto pushing me. Just when you think you are lax when you have a fresh kid like Sonny, 21, 22 years old, it pushes you to the top of your game. I know he didn't have anyone pushing him to the top of his game like I am going to push him. Sonny is a lot bigger, a lot younger and a lot stronger," Hart explained.

I think he might just have too much speed for Barrera. But Barrera has actually proven something at 175 against solid to good opponents. Barrera is also 37 years old and got beat up by Bivol just last year, so…

This guy is always talking, then folds under pressure. This will be another L on his resume.

If Hart is genuinely thinking like that he probably deserves to lose.

I hope in a controversial draw, Trout vs Gausha style. It would win me 500 Euros. :)

Pulling for Barrera the way Hart dismisses him. But Hart may be too big physically.