Jayson Velez: I Think I Won, I Showed That I'm a Warrior

At the PPL Center in Allentown, Pa, Jaime Arboleda survived a knockdown to win an excellent action fight by narrow split-decision over Jayson Veléz in a WBA Super Featherweight Title eliminator. The scores were 115-112 for Velez and 114-113 twice for Arboleda.

The 12-round, 130-pound offensive slugfest saw more than 1,800-plus punches thrown-including more than 500 landed-with Velez picking up the action in the championship rounds. In the 12th, Velez connected with just over a minute left to send Arboleda to the canvas for the lone knockdown of the bout.

The 25-year-old Arboleda (16-1, 13 KOs) from Curundu, Panama, was fighting in the U.S. for the third time in his career. He had never been past nine rounds until tonight and won his sixth consecutive bout. 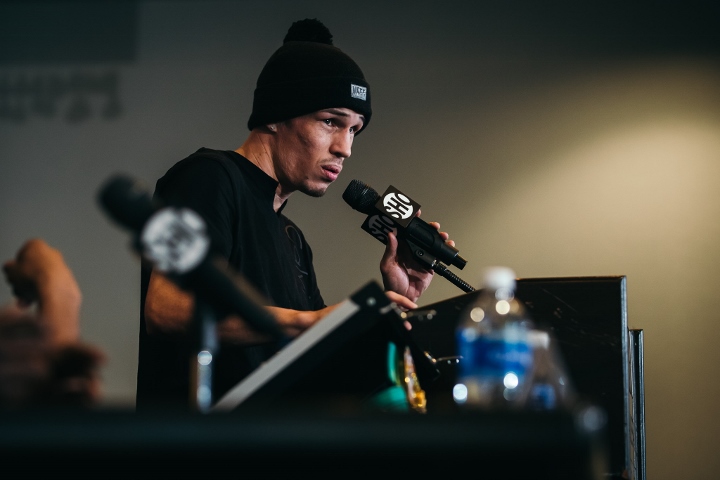 "Jayson Velez is a great fighter and has a great style," said Arboleda. "He was trying to use that to break me down tonight. Velez has faced a lot of good fighters and I believe I belong with those fighters. I had him hurt badly a few times, but I just got a little bit ahead of myself and didn't finish.

"It was a clean shot on the knockdown but it happened because I wasn't doing what I was supposed to (do) stylistically and with my footwork.I was a bit tired, but I wasn't too hurt. I went right back to fighting."

"It was a close fight, but I think I won the fight and it could have gone either way," Velez said. "I think I knocked him down twice but they didn't count one of them. It's OK. I showed that I'm a warrior like always. I have six losses now but I've never been knocked down. I'm still here, and I believe I'll be world champion someday."

I caught it a bit too late for a proper score total myself but from what I saw they both are warriors, great fight.

I had Velez winning 7-5 and the knockdown in Round 12 sealed it. In truth, the final round could have very well been a 10-7 round. Something needs to be done about the judging because when there is such a…

Fight of the year contender! This was an amazing fight with such sheer violence and carnage and will and heart and determination plus subtle skills on display! If you don’t love that fight then you just don’t love boxing! Credit…

Fight of the year so far. :boxing: