Jarrell Miller Return Not as Simple as Riding Out WBA 'Suspension'

With the new set of rankings released by all of the sanctioning bodies for the month, Jarrell Miller will no longer find his name listed among the top-rated heavyweights.

Despite commentary to the contrary, returning to the rankings—or even the ring—won’t be as simple as playing out the waiting game.

A six-month banishment from its heavyweight rankings was handed down by the World Boxing Association (WBA) to the unbeaten Brooklyn (NY)-bred contender following three separate failed drug tests in March. The ruling came across as grandstanding more so than anything else, given that the World Boxing Organization (WBO) and International Boxing Organization (IBO) simply dropped him without seeking media attention over the move. 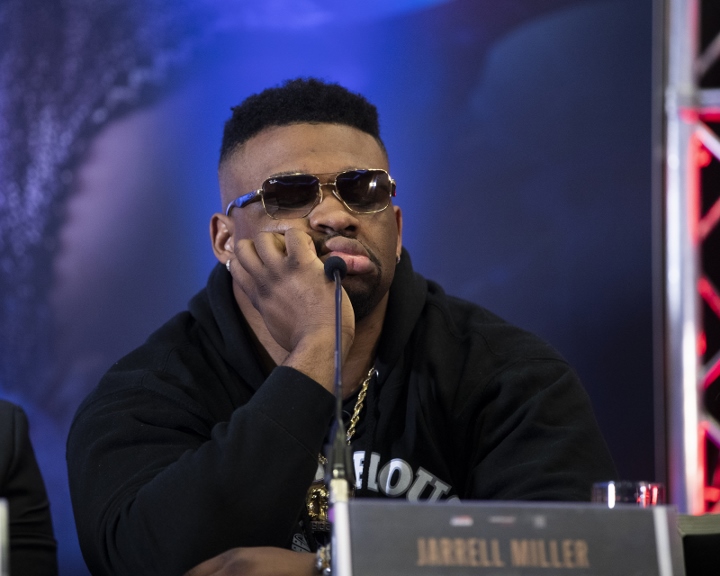 There exists a misconception that Miller (23-0-1, 20KOs) will be free and clear to resume his career shortly after the WBA-issued “suspension” expires on September 19. The date will mark the six-month period from the time of his March 20 drug test as conducted by Voluntary Anti-Doping Agency (VADA), for which Miller tested positive for long-ago banned substance GW1516.

Two more dirty tests would follow, but by that point his chances of maintaining a June 1 date with unbeaten, unified heavyweight titlist Anthony Joshua were long vanquished. Miller’s window of opportunity was slammed shut by the New York State Athletic Commission (NYSAC), whom on April 17—one business day after news of his initial positive test was revealed—denied his application to renew his boxing license with the state.

Because his license had expired the prior October, Miller managed to evade further disciplinary action from NYSAC beyond simply not being able to renew.

Despite the existence of the Association of Boxing Commissions (ABC), there isn’t a system in place to flag a boxer’s Federal ID of such violations. Such a process is dependent upon information provided by the presiding commission, which leads back to a boxer having to be licensed while such infraction was committed in order to be subject to disciplinary action.

At present moment, Miller is currently licensed to box in the state of Illinois. His license expires on September 30, one year from his application ahead of his 2nd round knockout of Tomasz Adamek last October in Chicago. Representatives from the Illinois State Athletic Commission have not responded to questions submitted by BoxingScene.com as to whether his current license status is subject for review given recent events.

It’s a moot point as Greg Cohen, Miller’s co-promoter is on record stating there are no such plans to move the heavyweight in the wake of the WBA ruling.

Of course, even if he were able to return to the ring at any point this year, it’s highly unlikely that Joshua or promoter Eddie Hearn will be in any hurry to revisit old business. The fact that Miller jeopardized their promotion and went out of his way to cheat ahead of their planned heavyweight title clash isn’t a memory that fades away any time soon.

Because Joshua owns most of the relevant heavyweight real estate, Miller’s one option at a major titlist is now out the window.

The thought of a clash with Deontay Wilder became a non-starter the moment Miller was removed from the World Boxing Council (WBC) rankings due to his failing to enroll in the sanctioning body’s Clean Boxing Program (CBP).

In retrospect, it should have served as a red flag, especially given his sordid history, having failed a drug test surrounding the final fight of his kickboxing career in June 14, a repeat loss to Mirko Cro-Cop. Miller was issued a nine-month suspension by the California commission—where the event took place—but it apparently only applied to his kickboxing status as he didn’t miss a beat in his boxing career.

Regardless, the two most lucrative heavyweight options—Joshua and Wilder—are already off the table even in the event he doesn’t receive further disciplinary action beyond the WBA’s faux suspension. That already eliminates any need that platforms such as DAZN, Showtime or Fox Sports would have for him, which control most of the relevant real estate in today’s boxing climate.

That still leads to a planned ring return, which means he will have to get licensed by a state commission and find a platform to fund his future bouts.

Once upon a time, boxers could get away with fighting in one U.S. state while being suspended in another. That luxury no longer exists since the formation of ABC, which mandates that a commission-issued suspension must be honored by all state governing bodies under the ABC rule.

Despite the fact that Miller isn’t under suspension, most commissions will question why he’s not licensed in his own state. The Nevada State Athletic Commission, for example, has tabled past applications until a boxer was able to clear the air in his/her own home state.

Because the NYSAC is among the more identifiable commissions in the country, chances are Miller will have plenty of questions to answer even in late September when his team is back on the hunt in search of his next fight. He will also be required to show proof of reformation, which in this case would be full enrollment in a reputable random drug testing program—which BoxingScene.com has learned such steps have not yet taken place.

Commissions will also likely factor in suspensions issued in similar cases. Those who believe a six-month timeout is suitable are quick to point to the similar length of punishment recently issued to boxers such as Saul ‘Canelo’ Alvarez—who failed a pair of tests ahead of his eventually postponed rematch with Gennady Golovkin last year—England’s Billy Joe Saunders, who forfeited his WBO middleweight title after testing positive for Oxilofrine ahead of his eventually canceled Oct. ’18 clash with Demetrius Andrade.

Seemingly forgotten, however, are those who were made to suffer a far worse fate.

Starting at heavyweight, Fury and Dillian Whyte were both hit with two-year bans for coming up dirty in the past. Fury spent most of his term appealing the ruling all while sitting out for nearly three years in total, due to other issues, while Whyte took his suspension like a man and has since emerged as a top heavyweight contender.

Luis Ortiz was suspended for nine months following his failed drug test surrounding a knockout-turned-No Contest versus Lateef Kayode in Sept. ’14. The Cuban southpaw was fortunate to avoid a second suspension after testing positive for chlorothaizide and hydrochlorothiazide ahead of a planned Nov. ’17 clash with Wilder, although the WBA did drop him from its rankings for one year. The WBC was more forgiving of his sins, as the issue came down to his failing to disclose medication he was taking to treat high blood pressure, which ultimately produced the dirty test result.

Julio Cesar Chavez Jr. was hit with a nine-month suspension after a drug test surrounding his Sept. ’12 loss to Sergio Martinez in Las Vegas produced a positive result for cannabis. The infraction was his second offense, having been previously popped by the Nevada commission for banned substance furosemide in his Nov. ’09 fight with Troy Rowland.

Cannabis also got the best of a boxer far lower on the notoriety chart. Philadelphia’s Avery Sparrow returned this past March, scoring a 10-round decision over veteran Hank Lundy in his first fight in 53 weeks. The reason for the extended break came from his testing positive for cannabis following a knockout win-turned No Contest versus Jesus Serrano last March, for which he received a stiff suspension from the Pennsylvania Athletic Commission—one of the most reputable in the country, if not the world.

As boxing remains entrenched in funny business far more than a collective interest to conduct business above board, chances are time will eventually heal any ill will currently directed at Miller.

Whether that translates into clearance for a ring return and a willing outlet to fund his comeback tour are questions that likely won’t be answered in the six-month time frame being mistaken as an official countdown.

Appears that only Joshua and Wilder are free from PED in the HW division... Time will tell though

Appears that only Joshua and Wilder are free from PED in the HW division.

[QUOTE=greeneye99;19723015]Keep that same energy for Canelo who failed 2 drug test and got the same 6 Month ban[/QUOTE] Canelo is not a repeated drug cheat or tested positive for 3 different ped’s dip$h1t.... when he fail another test I’ll say…

[QUOTE=Boksfan;19723844]Miller should be banned for 2 years. [IMG]https://i.postimg.cc/prRDgRWt/Millerroid.jpg[/IMG][/QUOTE] Why has Big babys head been put on Anthony Joshuas body?

Miller should be banned for 2 years. [IMG]https://i.postimg.cc/prRDgRWt/Millerroid.jpg[/IMG]