Jarrell Miller Promoter: The Ball is in Anthony Joshua's Court

Joshua has a big decision to make over his next fight in April, with a heavyweight unification bout against Wilder his preferred option.

At the moment, Joshua is slated to defend his WBO, IBF, WBA, IBO heavyweight titles on April 13th at Wembley Stadium in London. 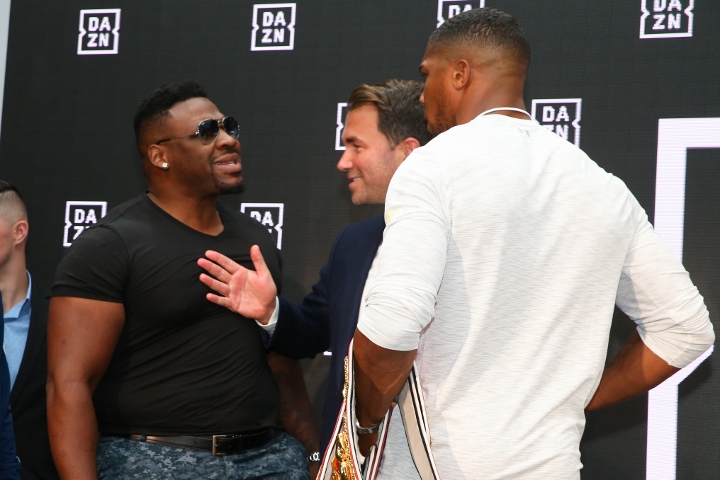 However, the pair's respective representatives have previously struggled to agree a deal for the duo to meet and an announcement has yet to be made.

That could leave the door open for Miller, with Madison Square Garden touted as a potential venue should Eddie Hearn and Matchroom Boxing come calling.

"Jarrell is the best American heavyweight, and has always expressed his interest to fight Joshua, so the ball is in his court," his promoter Dmitry Salita told Sky Sports.

"This is one of the biggest possible fights in boxing for 2019. If it happens at Madison Square Garden, it would bring back the heavyweight memories of Mike Tyson and Riddick Bowe, the boxing greats from Brooklyn, New York.

"Jarrell grew up in Brooklyn, it would be a huge event in New York. One of the biggest heavyweight fights in Madison Square Garden, literally and figuratively."

There are heavy rumors that a Joshua vs. Miller contest could take place - if other options for the British superstar fall out.

Miller is undefeated with 23 wins and one draw from his 24 career fights, having knocked out Bogdan Dinu in November.

Briton Dillian Whyte is also in the mix to face to Joshua in a rematch, and many view him as the frontrunner to get the call. Joshua knocked Whyte out in the seventh round back in December of 2015.

[QUOTE=Robbie Barrett;19422135]Miller doesn't deserve a shot. Boxing needs to stop rewarding fighters that take no risks with title shots over others that have done more.[/QUOTE]I 100% agree with this. Joyce called Miller out and Miller said Joyce needed to earn…

[QUOTE=sofreshhh;19422763]Ortiz is head and shoulders better than any of the these bums.[/QUOTE]Thats possible. I wouldnt call them bums but Ortiz still has a lot of good fights left in him.

Ortiz is the only match-up for you if you want to be taken serious, Mr. Miller. Wilder and Fury will dance again and everyone knows Whyte gets Joshua next, and all other names are just to bid down Whyte and…