Jarrell Miller quickly ended what was developing into a competitive fight Saturday night.

The 315-pound heavyweight contender knocked down Bogdan Dinu twice in the fourth round of their scheduled 12-round heavyweight fight. Dinu couldn’t get up before referee Bill Clancy counted to 10 following the second knockdown.

Clancy stopped the fight at 2:45 of the fourth round in the main event of a nine-bout card at Kansas Star Arena in Mulvane, Kansas.

Romania’s Dinu, 32, was unbeaten but untested entering his fight against Miller.

Miller (23-0-1, 20 KOs) won his second fight in six weeks, an unusual activity level for a modern-day heavyweight contender. He agreed to a quick return because he needed less than two rounds to knock out faded former contender Tomasz Adamek (53-6, 31 KOs) on October 6 in Chicago.

Dinu (18-1, 14 KOs) jumped at the opportunity fight Miller on less than one month’s notice because he and Miller thought they would fight for the WBA world heavyweight title Saturday night. The WBA didn’t strip that title from Manuel Charr, however, which left Miller and Dinu to compete for two regional titles, the interim NABA and vacant NABO championships. 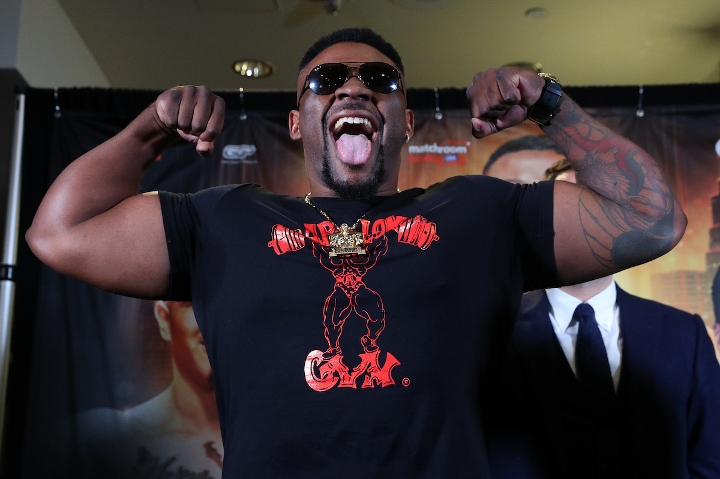 The WBA was expected to strip Charr once his fight against Fres Oquendo was canceled in September because Charr tested positive for two anabolic steroids (https://www.boxingscene.com/wba-strip-charr-miller-dinu-unlikely-title-fight--133710).

After three competitive rounds Saturday night, Miller landed a right hand to the body and a left hook to the top of his head that dropped Dinu with 50 seconds to go in the fourth round. Dinu made it to his feet by the time Clancy’s count reached nine.

Miller landed another hard right hand, though, and Dinu hit the canvas again with 25 seconds to go in the fourth. This time, Dinu didn’t get up in time and the fight was stopped.

Miller stalked Dinu during the third round, but couldn’t land the huge head shots he sought. He did catch Dinu with a hard right to the body just before the midway mark of that third round.

Miller went to Dinu’s body again during the final minute of the third round, but Dinu tied him up. With 27 seconds remaining in the third, Miller landed a low left hand below Dinu’s belt line that caused a brief break in the action.

Clancy warned Miller for a low blow after that shot landed.

Dinu landed a short left hook 55 seconds into the second round, which forced Miller to reset his feet. Dinu continued touching Miller with his jab for the remainder of the second round.

[QUOTE=MELLOMAN007;19280640]I disagree due to the fact that Big Baby hardly moves his head and appears to be a sucker for the 1-2 and Wilder has the best 1-2 in the division. I would love to see it though. I wonder…

So apparently Hearn was ticked that half of the crowd left after the Rios/Nico fights and there was no atmosphere at all for the main event or the Shields fight. First off, why the hell did he have the Shields…

In terms of ability and style, Bogdan Dinu was a less talented version of Gerald Washington. Half-decent jab-and-move, but was walked down far earlier in the fight than Washington was - and looked for an out as soon as it…

I'd like to see Miller against someone experienced, tough and will fight back. Maybe Takam, Chisora, or Breazeale.

Cut it out...everyone knew this was easy work for miller...