Jaron Ennis: I Might Have To Get Into A Mandatory Position To Get A Title Shot

Had he taken a more patient approach when he battled Bakhtiyar Eyubov, Jaron Ennis thinks he could’ve scored a second-round knockout.

Ennis eventually stopped Eyubov in the fourth round, but the gifted Philadelphia welterweight learned to remain calm from his last performance January 10 in Atlantic City, New Jersey. The 23-year-old Ennis plans to apply what he learned versus Eyubov when he faces Juan Carlos Abreu in a 10-round fight Saturday night and beyond.

As much as Ennis wants a title shot, the young contender understands he is a high-risk, low-reward type of opponent for such established champions as Terence Crawford, Errol Spence Jr. and Manny Pacquiao. Secondary title-holders Yordenis Ugas and Jamal James want bigger fights and accompanying paydays as well, thus they’re not likely to face Ennis, either.

In fact, Ennis suspects he’ll have to become the mandatory challenger for one of the welterweight titles before he’ll get his shot.

“I think I might have to get into a mandatory position, because I don’t think any of the champs are gonna call me out,” Ennis told BoxingScene.com. “I don’t feel like one of the champs are gonna be like, ‘Oh yeah, I’m just gonna fight this guy.’ I’m ranked for the belts, but I don’t think they’re gonna just pick me. They’re gonna skip all around me and pick the easier fights.” 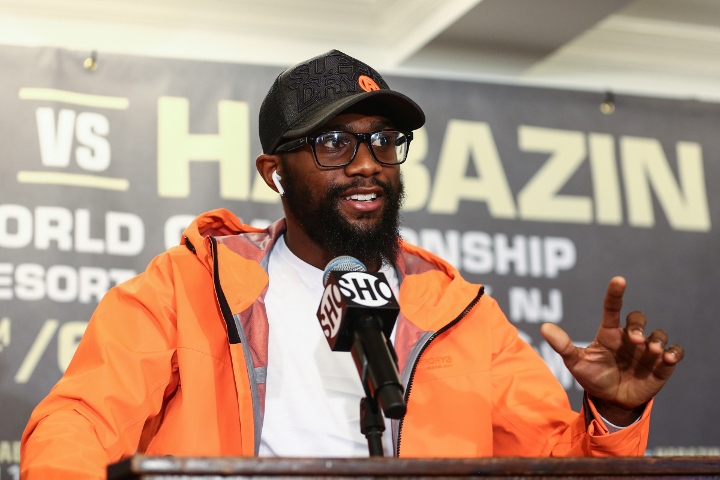 Ennis is ranked 11th by the WBO, 12th by the IBF and 15th by the WBC. His handlers have had difficulty finding ranked contenders who are willing to box Ennis for reasonable purses, but Ennis won’t allow those obstacles to frustrate him.

“A year-and-a-half ago, two years ago, I wouldn’t say it was frustrating, but I just wanted to get in there to show them that I’m ready,” Ennis said. “As I got older and wiser, I’m like, it’s on them if they wanna keep waiting around and letting me get better and more mature and smarter and faster and wiser. It’s gonna be worse the longer they wait.”

An unfazed Ennis expects to stop Abreu inside the distance and advance in what could be a lengthy journey toward a title shot.

“I’m still young,” Ennis said. “I’ve got time. The only thing this is doing is making me get better, helping me to be sharper, faster, stronger, tighten up my defense and become a better boxer all around. So, by the time I do get my shot, it’s gonna be easy.”

The Ennis-Abreu bout will be the first of three fights Showtime will televise Saturday night from Mohegan Sun Arena in Uncasville, Connecticut (9 p.m. ET/6 p.m. PT).

[QUOTE=Topdogggbm;20769902]You're punch drunk! I'm not sure there's a fighter on the planet that's more relaxed and sure of his ability in the ring. Maybe Canelo and that's about it. He's a relaxed fighter. This dude has ALL the skills needed…

This guy has 26 fights and has made nothing yet. Why would he get a title shot or something? he must beat at least some Samuel Vargas level guys first.

[QUOTE=SplitSecond;20768802]I didn’t say he’s a fraud, I said he’s on his way. Which was ironic considering your post. I’ve already posed the comparison of a guy in his division who has many less fights and is younger yet has moved…

[QUOTE=STREET CLEANER;20768331]After this fight if he wins he has to face fighters like Ramos, Dulorme, Josesito Lopez, Figueroa Jr, Lipenet, Hooker, etc so he can get more into the public eye prove himself with more established fighters. He looks like…

[QUOTE=STREET CLEANER;20768477]That is for sure but some fighters need a fight like Ennis. Knock off the up and coming to position themselves into a bigger fight.[/QUOTE] [B][I]Lipinets would be a good test for Ennis.[/I][/B]