It took a little longer than any of his first five fights, but heavyweight prospect Jared Anderson produced another knockout Saturday night.

Anderson dropped and stopped veteran Rodney Hernandez in the fourth round of their scheduled six-rounder at MGM Grand Conference Center in Las Vegas. A straight left hand and then a short right by Anderson sent Hernandez to the canvas with just under 50 seconds to go in the fourth round.

Referee Robert Hoyle quickly moved in to stop the action before Hernandez could attempt to get up. The time of the stoppage was 2:22 of the fourth round. 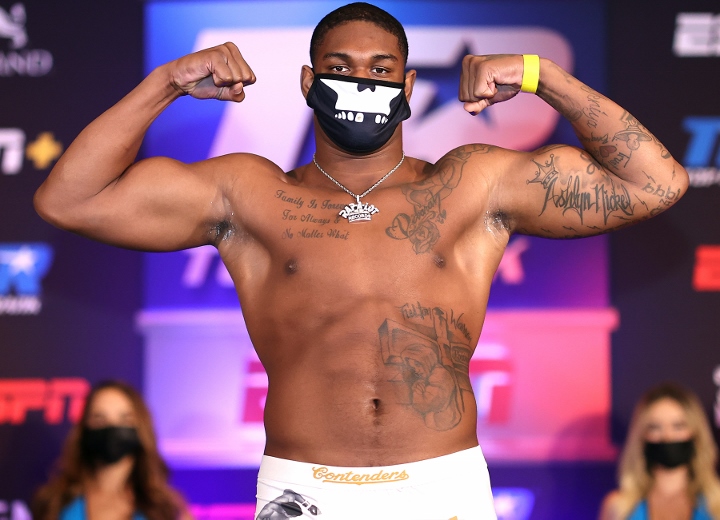 The 20-year-old Anderson, of Toledo, Ohio, kept his perfect record intact (6-0, 6 KOs). Anderson fought for the third time in 12 weeks within “The Bubble,” but this appearance lasted longer than either of his first two bouts there.

The 31-year-old Hernandez (13-10-2, 4 KOs), of Modesto, California, also was stopped in the second round of his previous bout by Scotland’s Martin Bakole (15-1, 12 KOs) on November 2 in Manchester, England. Hernandez has lost by TKO three times in eight years as a pro.

An accumulation of Anderson’s shots bloodied Hernandez’s nose during the fourth round. Fighting from a southpaw stance, Anderson

A right uppercut by Anderson stopped Hernandez in his tracks with 36 seconds left in the third round. Anderson’s right hand landed to the side of Hernandez’s head just before the bell rang to end the third round.

Anderson landed two overhand rights just after the halfway point of the opening round. Hernandez landed a stiff jab 55 seconds into the first round.

He still has a lot of room for growth, improvement and development. He has a long ways to go. He only has 6 professional fights. Therefore, 2021 should be a very busy year for him.

Bring on Kingpin for 10 round fight.