James Tennyson Destroys Josh O'Reilly in One Round

James Tennyson blasted his way to the verge of a shot at Teofimo Lopez or Gervonta Davis as he stopped Josh O’Reilly in less than a round in their WBA lightweight title eliminator on the Sunders-Murray bill at the SSE Arena, Wembley. 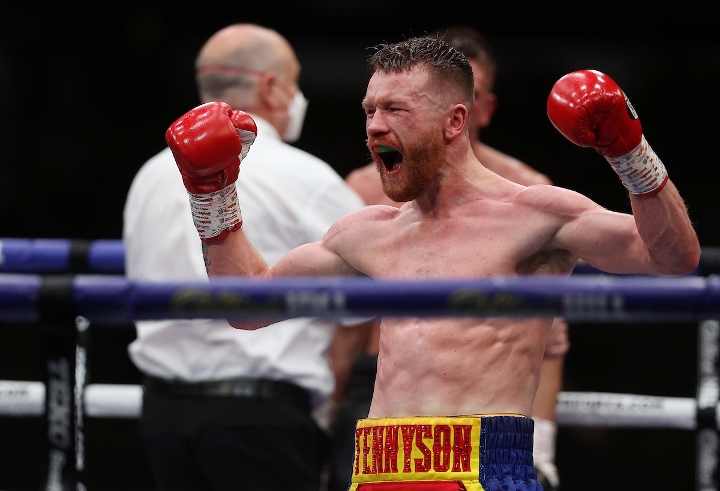 The 27-year-old Northern Irishman came up short in a shot at Tevin farmer’s IBF title at super-featherweight in 2018, but he has looked like a wrecking machine in six fights since switching up to lightweight.

“I was expecting a tough night with Josh moving around,” Tennyson, 27, said. “But I just clipped him with a left hook and it seemed to hurt him, so I went in and put it on him. It paid off.

“I can box as well, but when you put it on someone and catch them, you may as well follow it up. In an eliminator you take your chances.

“From moving up, that is six straight knockouts at lightweight. Doing the weight is absolutely amazing, I’m comfortable and feeling a heck of a lot stronger and sharper. The move up has benefited me massively.

“After tonight’s win, I’m knocking on the door [or a world title shot]. I am very close to being ready to go.”

He walked straight through O’Reilly. The Canadian went into the fight with a 16-fight unbeaten record but he could just not get out of the way as Tennyson came at him throwing bombs.

It took him less than a minute to find his mark, as he landed six or seventh hard punches before O’Reilly went tumbling to the floor. H looked hurt as he got up, but was waved back in and Tennyson loaded up on everything he threw. A right hand sent him stumbling across the ring before a left hook dropped him heavily again.

Referee Marcus McDonnell allowed O’Reilly to continue but promptly stepped in after Tennyson landed two more heavy right hands at 2:14 of the first round.

“He needs another fight at a higher level than Josh O’Reilly before he starts talking about Teofimo Lopez and Gervonta Davis,” Eddie Hearn said. “But there is plenty of fights we love. Roly Romero is No 1 at lightweight, I believe [Tennyson] will go in at No 2 in the next rankings. I love Jorge Linares. Jorge Linares at the Odyssey [in Belfast] when the crowds come back next year.”

[QUOTE=Mindgames;20929568]Do you reckon their paying Jonny to play a part,or is it CTE ?[/QUOTE] yea I'm not blaming Sky Sports for this one it is all Johnny I guess trying to make international Headlines with this comment

[QUOTE=Mindgames;20929565]I must admit I dont listen to him much lately.Hes was always abit wacky,hes just long gone now ain't he ?[/QUOTE] Yeah think he's a bit of a :crackhead saying mad stuff like "Bellew technically better then Usyk" and this…

[QUOTE=Boro;20928614]Only just now? wow he's done well to last so long in your estimations.[/QUOTE] I must admit I dont listen to him much lately.Hes was always abit wacky,hes just long gone now ain't he ?

Was this Bill O'Reilly's son?