Two-Time IBF World Super-Middleweight Champion James DeGale MBE has today relinquished his title as he closes in on securing big-fights in the final phase of his illustrious ring career.

DeGale, a former British and European Champion, has ruled the 168 pound division split over two reigns as World Champion totalling almost three years and has been involved in six IBF World Championship contests.

The Londoner is proud to have held the organisation’s prestigious and famous red and gold World Title belt that has been worn by many of the great fighters at the weight including legends Joe Calzaghe and Roy Jones Jnr. 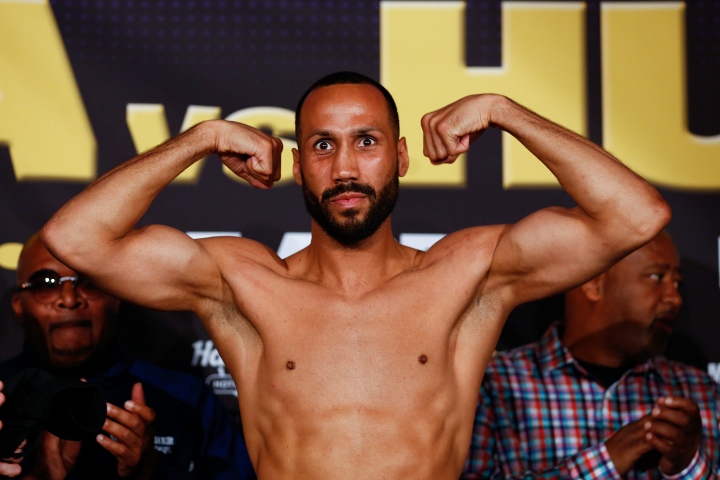 DeGale began his first reign as IBF World Champion in May 2015 by making history to become Britain’s first ever Olympic Champion to win a world title when he sensationally defeated Andre Dirrell in Boston to claim the vacant belt.

The trail-blazing Londoner then continued his campaign across the Atlantic to gain respect from the media and fans’ as he made the first successful defence of the title against former IBF World Champion Lucian Bute in Canada in November that year.

In April 2016, DeGale returned to the U.S to make the second defence of the title against tough Mexican Rogelio Medina in Washington which he won on a majority decision.

DeGale then aimed to solidify his dominance of the 168 pound division by attempting to unify his IBF title against WBC World Champion Badou Jack in January 2017 in Brooklyn, New York.  In an electrifying, all-action fight, DeGale retained his title by way of controversial draw that many felt DeGale had won.

A British homecoming world title defence against American Caleb Truax in December 2017 was ruined after DeGale lost his title on a points decision in a below par performance.  He later admitted it was because he returned to the ring too soon after having career saving surgery to his shoulder following the Jack fight.

However, DeGale proved his champion’s heart by facing Truax in his backyard for the rematch in April this year in Las Vegas when he reclaimed the title with a dominant display to win clearly on the judges’ scorecards.

DeGale was due to be involved in a purse bid for his IBF mandated title defence against Interim Champion Jose Uzcategui this Thursday (5th July), but has now withdrawn.

DeGale said, “No World champion easily gives up their World title that they’ve earned the hard way in the ring and I’ve proudly held the IBF World title in two reigns with pride and distinction which is why it makes it very hard decision to relinquish the belt.  It has been a pleasure to work with the IBF and I would like to thank president Daryl Peoples for allowing me to challenge and hold the distinguished belt that so many of the division’s great champions have held before for me.  It has been a honour to be recognised as the IBF World Champion and I hope that by now vacating it will ease the transition to determine a successor between the Interim champion Jose Uzcategui and the next highly ranked available contender.  I’ve achieved so much in my career, Olympic Gold, British, European and International titles and two-time World Champion and I believe I’m at the top of my game right now.  I’m in the final phase of my career where I have a few good years left where I can be involved in massive fights and really leave a legacy in the division’s history.  My team have been working very hard behind the scenes and we’ve got some very big and exciting news to announce soon.”

Expected at the time.

[QUOTE=Fabes88;18917807]Lol it’s not just fans. There’s literally an article on boxing scene that says “James degale: sometimes the duck is the right thing” I do not blame him for doing what he’s doing. I even said I understand why he’s…

[QUOTE=boogbx;18917019]Uzcategui has a extensive amateur record, earned his spot as a foreigner in Mexico, not easy and has looked like a world class beater since his Loss to Korobov. Uzcategui who is only getting better is easily better than Badou…

[QUOTE=KillaCamNZ;18916974]Whats more important to DeGale - avoiding a "dangerous" fight, or maximizing earnings from the few fights his body has left? Fans wanting it to be a duck because they want to be one of the cool kids and use…

[QUOTE=Sid-Knee;18914176]Why, because he beat a shot Dirrell? He hasn't even proved himself to be a good fighter yet. He's decent until he does something.[/QUOTE] Uzcategui has a extensive amateur record, earned his spot as a foreigner in Mexico, not easy…