WBO junior middleweight champion Jaime Munguia, and his lead promoter Zanfer Promotions, have reached a deal with Golden Boy Promotions for a multi-fight co-promotional pact, according to ESPN Deportes.

And the first bout of that pact will take place on the 26th of January.

Munguia's deal would include five to six fights. The Mexican boxer fought five times in 2018. 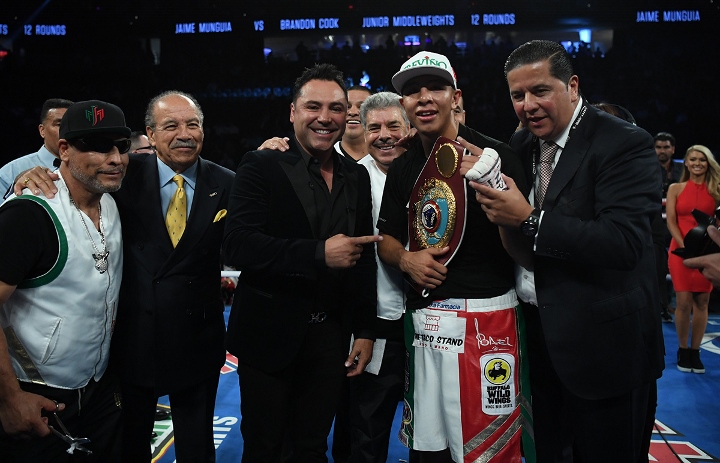 Golden Boy has an exclusive content deal with the streaming service DAZN.

A few weeks ago Golden Boy announced that $365 million deal was reached between Canelo Alvarez and DAZN - which consists of 11 fights over a five years period. That deal will start on December 15 at Madison Square Garden in New York, when Canelo moves up to 168-pounds to challenge World Boxing Association "regular" champion Rocky Fielding.

Munguia, 22, has a professional record of 31-0 and 26 knockouts. The Mexican became world champion in May after demolishing Saddam Ali in New York City. And then retained his title with defenses against Liam Smith and Brandon Cook. Golden Boy have co-promoted Munguia's last three fights.

On January 26, Munguía will defend his championship against Japanese contender Takeshi Inoue, at a venue to be decided. WBC champion Rey Vargas is expected to return on the same card.

The advantage of going with Golden Boy, is the possibility of a future fight down the line with Canelo.

[QUOTE=BigStomps;19303964]LoL, you fool! You noticed how I'm not the only one on here calling you an idiot and a hater for the shet you say??? Those are facts! 🤣[/QUOTE] You're so weak minded. Like I care what you or any…

[QUOTE=Nusky;19303489]Call me what you want. I just call it how I see it and state the facts. That's probably why you're so angry- because you know everything I said in the post is true. Come back at me with facts…

[QUOTE=BigStomps;19303355]Talk about being a straight fuccing hater,.... 🤣 You're just a punk ass loser![/QUOTE] Call me what you want. I just call it how I see it and state the facts. That's probably why you're so angry- because you know…