Jaime Munguia’s victory over Takeshi Inoue on Saturday night in Houston was precisely the kind of fight that would have resulted in an upset loss for a lesser fighter. In Inoue, he found a challenger built like an Olympic weightlifter, with the motor of a middle distance runner and the punching technique of a discus thrower, unable or unwilling to be hurt or ever take a step backwards. The kind of fighter that forces his opponent to be “on” every single second of the bout.

For a possibly weight-drained, relatively inexperienced young champion, it could have, and perhaps should have been a disaster.

But Munguia pulled through because of his greatest asset: Being too young to know any better.

“It was a great fight. He was a great warrior. It was a great battle for me. I was surprised by his ability to take punches,” said Munguia. “He took a lot of punches to the head and to the body. He took punches that would have dropped anyone else. I feel I got a lot of experience from this fight. I will keep working on using my distance. There were times where he was able to cut the distance, and I want to work on that.”

Watching Munguia operate is to long for what it felt like to be young again. There’s a carefree exuberance about him that stops short of recklessness and lands in a realm of unflappable confidence.  When he’s not training, he says he “likes to ride around the streets of Tijuana.”

He claims he doesn’t watch boxing, or any sport, he just likes to participate. As for how long he trains, he says “I usually train boxing for two hours a day, but I really couldn’t put a number on it.”

Youth typically materializes as an advantage in fighters who are prodigious athletic talents, like Gervonta Davis or Devin Haney, those who are blessed with enough ability to box circles around grown men. Munguia too is a physical marvel in that he’s a gigantic junior middleweight, however he is succeeding by outmanning men, so to speak, in the first year he’s legally able to purchase a beverage in the United States. 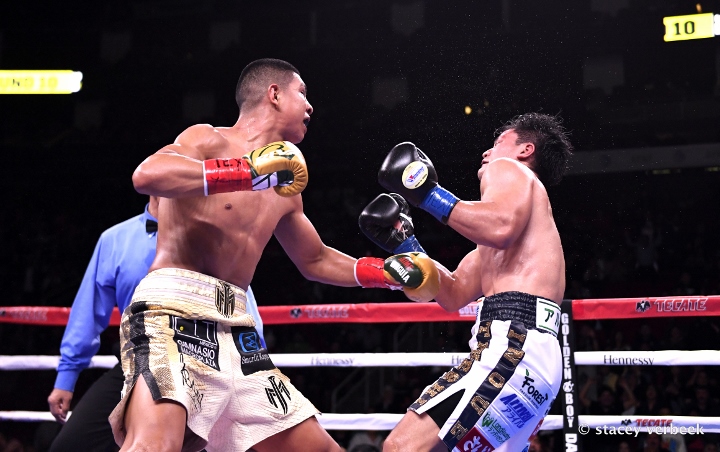 During his bout with Inoue, WBO middleweight champion Demetrius Andrade was tweeting and messaging reporters telling them he wants to face Munguia. Andrade has been seeking a fight of import for some time, and there’s a prevailing thought that fighters’ handlers have been less than eager to put their charges in the ring with him. But when Munguia was relayed the information that Andrade wanted to fight him, he simply replied, “sure, let’s do it.”

It’s possible that Munguia knows of Andrade and has already considered how he might be able to beat him, but it’s also totally possible, given that he claims he doesn’t watch boxing, that he neither knows who Andrade is, or cares.

At 22 years of age, Munguia simply believes he can do anything. This is a person who turned pro at 16 because he grew bored of the amateur ranks and the arduous wait for the next Olympic cycle, so he went and fought grown men without headgear instead.

It was less than a year ago that an unknown Munguia was rejected as an opponent for Gennady Golovkin by the Nevada State Athletic Commission. Munguia requested the fight, on short notice against the man at the time considered to be the most fearsome puncher in the sport. Instead, Zanfer offered him a fight with Sadam Ali on two weeks notice, which he took, along with Ali’s title after knocking him out.

“For great boxers who become legends, a common path exists,” Munguia wrote for ESPN last year. “Over the course of a career, they dreamed big, had faith, and took the risks to show the fans and critics that they are champions. My name is Jaime Munguia, and my day-to-day life as a boxer is defined by those risks.”

Munguia has been consistently compared to middleweight kingpin Canelo Alvarez, ostensibly because they are close in weight and hail from the same country. It’s not because they’re stylistically similar. Munguia is a stalking power puncher, while Alvarez is a counterpuncher at heart. Alvarez has always taken pride in his slippery defensive skills, while Munguia had to bring Roberto Alcazar about specifically to improve his defense because it was previously a complete afterthought.

The real similarity in Munguia and Canelo lies in their mentality. Alvarez took a fight with Floyd Mayweather when he was 23 years old. But he also took risks that had far less of a payoff in terms of prestige or money, against the likes of Erislandy Lara, and now Danny Jacobs. Like Munguia, Canelo was willing to go through hell to make weight at 154 without complaint, as evidenced by the fact that he once ballooned to the equivalent of the cruiserweight division on fight night. Munguia might say he can comfortably make 154, but those who watched him at the weigh-in on Friday, or saw his mouth hanging open as the Inoue fight wore on could surmise that the weight cut is taking a toll.

He may not be able to get away with that for much longer, in the same way we all can’t get away with lots of things we did when we were younger. However unlike other bravado-laden fighters in their early 20s, you don’t root for Munguia to get his comeuppance. You root for him because he reminds you of everything that was great about being young. And Munguia himself is nothing if not great already at such a young age.