The IBF informed BoxingScene.com on Wednesday night that the purse bid for its mandated middleweight title bout between Sergiy Derevyanchenko and Daniel Jacobs has been postponed until July 10.

Their purse bid had been scheduled for noon Thursday at the IBF’s headquarters in Springfield, New Jersey. The postponement affords promoters Lou DiBella (Derevyanchenko) and Eddie Hearn (Jacobs) five additional days to reach an agreement for their 160-pound championship match without a purse bid being necessary.

Ukraine’s Derevyanchenko (12-0, 10 KOs) is the IBF’s No. 1 middleweight contender. Brooklyn’s Jacobs (34-2, 29 KOs) is rated No. 3 among the IBF’s 160-pound contenders, but he is the next available contender to fight Derevyanchenko for the vacant IBF crown because the No. 2 position in its rankings is unoccupied. 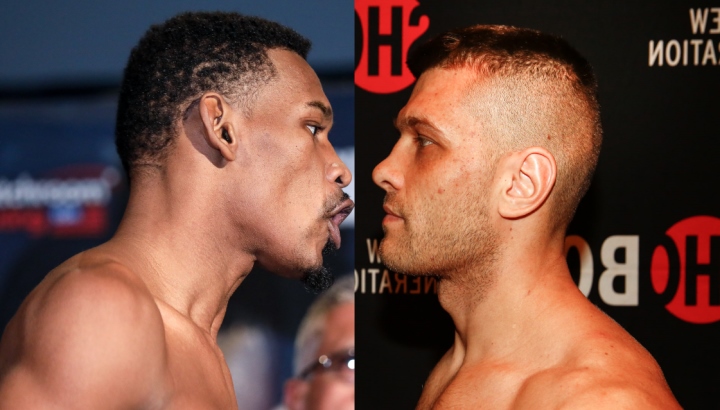 Assuming DiBella and Hearn can come to an agreement, Derevyanchenko and Jacobs will fight for the middleweight title the IBF stripped from Gennady Golovkin on June 6.

The IBF took its middleweight crown from Golovkin because the sanctioning organization determined Golovkin didn’t adhere to the stipulations of an exemption it granted him to fight Vanes Martirosyan on May 5 in Carson, California. The IBF didn’t sanction Golovkin-Martirosyan as a title bout, but allowed Golovkin to fight Martirosyan, who lost by second-round knockout, and keep its middleweight title as long as Golovkin agreed to defend it next against Derevyanchenko, his mandatory challenger.

Golovkin (38-0-1, 34 KOs) requested another exemption at an IBF hearing May 22 in Newark, New Jersey, so that he could face Canelo Alvarez in a rematch September 15 in Las Vegas. Their rematch was first scheduled for May 5 in Las Vegas, but that fight was canceled because the Nevada State Athletic Commission suspended Alvarez (49-1-2, 34 KOs) for twice testing positive for clenbuterol, a banned substance, in February.

I got D-Chenko taking this one.

[QUOTE=factsarenice;18916170]It's not complicated, unknown Derev with no build up for 1 or skip him for 25 million. Mathematics.[/QUOTE] And against the more accomplished opponent as well.

[QUOTE=Ajvar;18915733]IBF specifically told that it [U]won't count Vanes fight as defence of IBF belt[/U]. But they will let it go as long as fight against Derev happens in less than 3 months.[/QUOTE] Exactly. The guy keeps saying he was stripped…