Nearly five months have passed since Kovalev’s technical knockout loss to Andre Ward in their rematch, but the frustration from their split is still fresh for Kovaelv’s former trainer. Their rocky relationship was an issue during training camp for Kovalev’s second fight with Ward, but it grew worse after Kovalev “quit” in their rematch, according to Jackson.

Russia’s Kovalev (30-2-1, 26 KOs) will return to the ring against Ukraine’s Vyacheslav Shabranskyy (19-1, 16 KOs) on November 25 in The Theater at Madison Square Garden (HBO). Abror Tursunpulatov, Kovalev’s new trainer, will work the former light heavyweight champion’s corner for the first time that night. 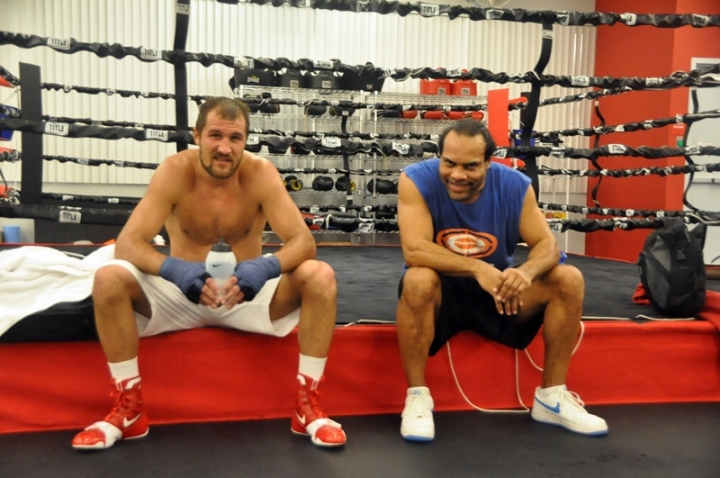 “Sergey is a guy who, when he first came here, he was humble,” Jackson told BoxingScene.com recently. “But the more he started winning, once he became champion, he became big-headed. He felt he did everything on his own. No one taught him anything, no one helped him get his title. So you get that from a lot of guys. He’s to the point now where [he feels] he doesn’t even need a trainer. OK. You need somebody.”

Despite their overall success together, Jackson will not be rooting for Kovalev in his return.

Ward (32-0, 16 KOs) announced his retirement September 21, the same day a press conference was held in New York to officially announce the Kovalev-Shabranskyy bout.

Three months earlier, Ward was able to produce a more convincing victory over Kovalev than he did during their first fight, which Ward won by a widely debated unanimous decision. Ward, of Hayward, California, stopped Kovalev in the eighth round after landing multiple questionable body blows that referee Tony Weeks ruled were at or above Kovalev’s belt line.

That controversial conclusion aside, Jackson believes Kovalev had already “quit” by then because Ward clearly hurt him with a right hand earlier in the eighth round and was breaking Kovalev down to the body.

“You wanna be mad at somebody, be mad at Ward,” Jackson said. “Ward is the one that stopped you. Then you’re made because Ward retired. He had the nerve to say Ward is afraid to fight him a third time. He beat you convincingly the second time because you quit. No one else quit – you quit. But you want a third fight with him.”

[QUOTE=Vlad_;18213269]Haha damn. Did you see yesterday’s JDJ on SecondsOut yesterday? JDJ almost threatened Kovalev and said he has a surprise for him.[/QUOTE] lol naw but ill watch it right now

[QUOTE=.!WAR MIKEY!;18213263]**** JDJ hope kovalev pays your ass a visit and alters your life![/QUOTE] Haha damn. Did you see yesterday’s JDJ on SecondsOut yesterday? JDJ almost threatened Kovalev and said he has a surprise for him.

**** JDJ hope kovalev pays your ass a visit and alters your life!

JDJ is right & wrong. Right- In that he did quit in the rematch. I felt Ward/Kovalev I was a complete and total ripoff, he beat Ward and got jobbed, but the rematch was a different story. Even if there…