He had been waiting ever since he dismantled Nathan Cleverly five months to officially secure a shot at WBC light heavyweight champion Adonis Stevenson. That’s why when Leonard Ellerbe, CEO for Mayweather Promotions, informed Jack on Wednesday that their fight was set for May 19, Jack felt a sense of relief.

The former WBC super middleweight champion thought he’d face Stevenson sometime late in March, but better later than never. Jack just wanted an assurance that it actually would be his next fight.

That moment came during Showtime’s “2018 Boxing Upfront” event Wednesday, when Stevenson-Jack was officially announced as part of the premium-cable channel’s lineup through June 16.

“With [Stevenson], you never know,” Jack told BoxingScene.com. “So until they said it [Wednesday], that it’s official, I wasn’t too sure. He’s a tough guy, too. I’m not saying that he’s scared of me or anything. You just never know.”

Jack just didn’t know because while he has been busy battling one current or former world champion after another since April 2015, Stevenson has defended his title against Tommy Karpency, Thomas Williams Jr. and Andrzej Fonfara. None of those three fights, all optional title defenses for Stevenson, have lasted past the fourth round.

Stevenson’s reluctance to test himself against more imposing opposition has made him one of boxing’s most heavily criticized champions. According to Jack, even some of Stevenson’s supporters in Canada, his adopted homeland, have grown weary from Stevenson routinely taking the path of less resistance. 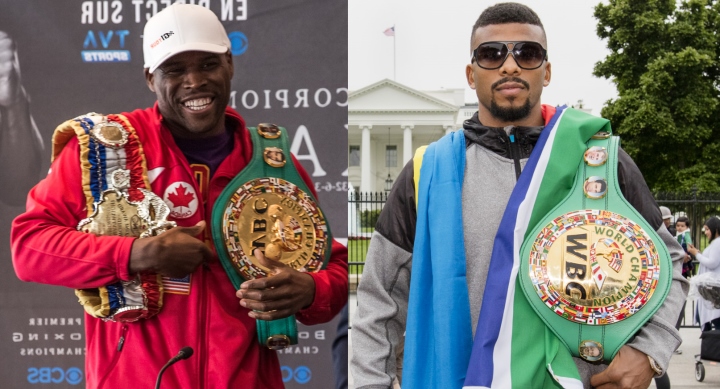 Their fight will take place at an undetermined venue in Quebec, where the Haitian-born Stevenson has long resided. Jack, a Las Vegas resident raised in Sweden, is looking forward to traveling to Stevenson’s home turf for their 175-pound title fight.

“I’ve got a lot of fans there, too,” Jack said. “A lot of people have hit me up. They want me to take his belt. They’re tired of him because he don’t fight the best. I’m the opposite. I fight the best.”

In his past five fights, Jack (22-1-2, 13 KOs) has beaten Anthony Dirrell by majority decision to win the WBC 168-pound title, since-crowned WBA super middleweight champ George Groves by split decision, Lucian Bute by disqualification following Bute’s positive test for a performance-enhancing drug, settled for a draw with James DeGale and stopped Cleverly in the fifth round to win a version of the WBA light heavyweight title.

“Just think about Badou Jack’s track record since 2014,” Ellerbe said. “This will be his sixth world title fight in a row. Look what he has accomplished. He’ll be looking to start off the year, in the middle of May, as the frontrunner for ‘Fighter of the Year.’ I think going to Canada and beating a guy of the stature of Adonis Stevenson, and in the way I anticipate he’s gonna do it, because again, he’s fighting the best in the division, and watch what he goes in there and does to him.

“I have a great deal of respect for Adonis and what he’s accomplished. He’s a tremendous fighter, he’s a tremendous puncher and he knocks guys out for a living. This is gonna be an electrifying fight.”

By the time they fight, Stevenson (29-1, 24 KOs) will have been off for almost a year. The powerful southpaw hasn’t fought since he defeated Fonfara (29-5, 17 KOs, 1 NC) by second-round technical knockout June 3 at Bell Centre in Montreal.

Since his surprising first-round stoppage of Chad Dawson to win the WBC light heavyweight title in June 2013, Stevenson has competed in just 51 combined rounds over a span of eight fights.

Stevenson’s lengthy layoff and comparative inactivity aside, Jack realizes his second light heavyweight title fight will be more difficult than the first one, a fifth-round stoppage of Wales’ Cleverly (30-4, 16 KOs) on the Floyd Mayweather Jr.-Conor McGregor undercard August 26 at T-Mobile Arena in Las Vegas.

“I don’t think about that,” Jack said, referring to Stevenson’s layoff. “I think about that I’m gonna face the best Adonis Stevenson. If he’s getting older overnight or whatever, we’ll see fight night. But I’m expecting a tough fight and I’m excited.

“I’m gonna win the fight, regardless of what happens. I believe I’m the better boxer and I can punch, too. So we’ll see.”

While confident, Jack knows all too well that all it takes is one clean punch to completely change a fight, especially against a knockout artist such as Stevenson. Jack’s success the past few years came after unheralded Derek Edwards beat him by first-round TKO in February 2014.

Jack is convinced he is a more complete fighter than Stevenson, yet concedes that the defending champion’s pulverizing power is the ultimate equalizer.

“I’ve got different weapons,” Jack said. “I’ve got more weapons than he’s got. But what he’s got, sometimes you don’t have to be that skillful. If one punch lands, that’s it sometimes. And he can box, too. People are kind of overlooking him just because they don’t like him as a person, but he is very skillful and talented. He’s one of the best guys in the division and he’s 40, so he’s not a bad fighter.

“I don’t know him as a person. I’ve never met him. I don’t worry about what people say about him on the Internet and stuff like that. That don’t mean sh*t. I know he’s a tough guy and a hard worker. Otherwise, he wouldn’t be on this level.”

Nevertheless, age and activity are obvious advantages for the 34-year-old Jack. While he is looking forward to defeating Stevenson and moving on to title unification fights in the loaded light heavyweight division, Jack isn’t as sure how much time Stevenson has left at the elite level.

He feels he has taken a lot out of his last two opponents, DeGale and Cleverly, who both were 30 when Jack fought them.

“We beat DeGale and they robbed us,” Jack said. “He’s not the same fighter anymore. Cleverly, we retired him. Who knows what will happen in this next fight. Who knows? He might retire, too.”