With slightly more than a minute left in round eight of the January 25, 2020, fight at Barclays Center between Danny Garcia and Ivan Redkach, Redkach bit Garcia just below the left side of his neck while the fighters were in a clinch.

"I just felt something digging in my skin," Garcia said at the post-fight press conference. "I thought a mosquito got me. I look over and he's biting me."

Referee Benjy Esteves didn't deduct points for the foul or issue a warning, so one assumes that he didn't see it. The Showtime commentating crew, which included Al Bernstein and Paulie Malignaggi (two of the most knowledgeable observers in boxing), didn't see it either. After the round, a Showtime microphone picked up Angel Garcia (Danny's father and trainer) bringing the incident to Esteves's attention. In an in-ring interview after the fight, Garcia told Showtime's Jim Gray, "He said 'Mike Tyson' when he bit me." 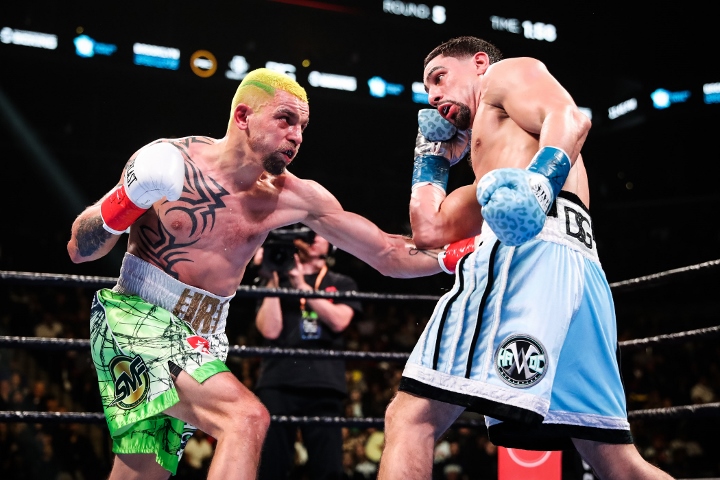 On January 27, New York State Athletic Commission executive director Kim Sumbler signed a "Notice of Suspension, Imposition of Fine, and Purse Forfeiture." The document states - and the NYSAC subsequently announced - that the commission had (1) suspended Redkach for one year; (2) fined him $10,000 (the maximum allowable fine); and (3) confiscated his entire $300,000 purse. Where will the money go? The State of New York will keep it.

Biting, gnawing at an opponent - call it what you will - is indefensible. It can't be tolerated in boxing and demands punishment. But the NYSAC's handling of this matter to date might be as inappropriate as Redkach's conduct.

There's a concept called "due process." Redkach is entitled to it. And he hasn't gotten it.

Who at the commission made this decision? The complaint was signed by Sumbler with apparent input from David A. Mossberg (an attorney with the New York State Department of State). But the NYSAC has refused to respond to an inquiry from Boxing Scene asking who specifically made the decision or what procedure was followed. We do know that Redkach hasn't been given an opportunity to explain what happened from his point of view.

In other words, the proceedings to date sound like something out Alice's Adventures in Wonderland where the Knave of Hearts is put on trial for allegedly stealing tarts baked by the Queen.

"Let the jury consider their verdict," the King said.

"No, no!" said the Queen. "Sentence first, verdict afterward."

There's no official ring registry for biting in boxing. Most famously, Mike Tyson was disqualified after biting off part of Evander Holyfield's ear in their 1997 rematch. Eight years later, Tyson bit Kevin McBride on the nipple before being knocked out in an ignominious end to his storied ring career. Two years before Tyson-Holyfield, Andrew Golota bit Sampson Po'hua on the side of the neck. In 2019, Kash Ali was disqualified after biting David Price just below the chest in a fight in Liverpool. Adrian Dodson bit Alain Bonnamie on the chest in round twelve of a 1999 fight in England and was disqualified.

Garcia-Redkach wasn't Mike Tyson biting off part of Evander Holyfield's ear. To treat it as though it were is ridiculous.

It doesn't appear as though Redkach was trying to injure Garcia in any significant way. He didn't spit out his mouthpiece (as Tyson did against Holyfield). He didn't break the skin or leave an ugly, bite-marked-shaped welt as was the case in several of the other biting incidents referenced above. Did Redkach really say "Mike Tyson," or was Garcia joking (as he did at the post-fight press conference while talking about Redkach's "brand new veneers")? If Garcia's corner hadn't brought the incident to the attention of Benjy Esteves after round eight and Danny hadn't referenced the bite in post-fight interviews, it's doubtful that the NYSAC would have even known about it.

The notice served on Redkach by the NYSAC says that, following the fight, Garcia was examined by the commission's chief medical officer "who observed impressions that appeared consistent with bite marks on Mr. Garcia's left anterior base of the neck/upper torso."

"Consistent with," not "diagnostic of."

Moreover, since no one alleges that Redkach bit Garcia more than once, that raises the question of whether these "impressions" were caused by a bite or the normal rigors of a fight.

In other words; punishment first, then we'll hold a hearing to find out what happened.

Once again, Alice's Adventures in Wonderland:

"The King turned pale, and shut his note-book hastily. ‘Consider your verdict,’ he said to the jury in a low trembling voice."

"'Not yet, not yet!’ the Rabbit hastily interrupted. ‘There’s a great deal to come before that!’"

"I used to promote Ivan Redkach," DiBella says. "I think he's a good person. Should he have bitten Danny Garcia? No. Should he be punished? Yes. But for the commission to throw the book at him over this is the worst kind of hypocrisy. This is a commission that has made a conscious decision to look the other way when it comes to certain fighters who are using illegal PEDs. No one dies from being bitten on the shoulder in a boxing ring. Fighters can die from an opponent using PEDs. This is a commission that looks the other way while all sorts of illegal things like phony weigh-ins are going on. Has this commission ever suspended or fined a fighter for hitting another fighter who was on the canvas, for rabbit-punching, for a deliberate low blow? There are a lot of people who deserve to be punished by the New York commission for conduct that's a lot worse than what Ivan did, and the commission does nothing about them."

So . . . How should Ivan Redkach be punished?

A line has to be drawn to separate acceptable and unacceptable conduct. But the punishment should fit the crime. Also, one has to remember that Redkach's trainer and other members of his team are entitled to share in his $300,000 purse.

There might be instances where forfeiture of a fighter's total purse is appropriate. This isn't one of them. Based on what's publicly known at the present time, a $30,000 penalty (ten percent of Redkach's purse) coupled with a six-month suspension would be more than sufficient punishment.

Meanwhile, the commission's position in this matter has been further undercut by the fact that it gave Redkach a promoter's check for the full amount of his purse on fight night. And this check has already cleared. From the NYSAC's point of view, that's a textbook example of locking the barn door after the horse has been stolen.

Did the key commission personnel on site at Barclays Center on January 25 even know then that there had been a bite? If so, releasing the check speaks to sloppy administrative practices. If not, it speaks to the extent to which, despite sitting at ringside, they were oblivious to what was happening in front of them. Or maybe they didn't think it was such a big deal at the time.

The "Notice of Suspension, Imposition of Fine, and Purse Forfeiture" issued by the NYSAC provides that Redkach must forfeit and pay the full amount of his $300,000 purse to the commission within 48 hours of the notice and the $10,000 fine within 30 days. Good luck on that.

Under New York State law, Redkach has the right to challenge the penalties imposed on him by the commission at a formal appeals hearing. He is expected to do so. This might lead to a negotiated settlement. The commission's most potent weapon in these negotiations would be the threat of keeping Ivan on suspension indefinitely and hoping that other states would honor the suspension.

Common sense dictates that the punishment the NYSAC is seeking to impose on Redkach is excessive. $300,000? His entire purse? Come on! It's evocative of the croquet game in Alice's Adventures in Wonderland: "The Queen was in a furious passion, and went stamping about and shouting ‘Off with his head!'"

Thomas Hauser's email address is [email protected]. His most recent book – A Dangerous Journey: Another Year Inside Boxing  – was published by the University of Arkansas Press. In 2004, the Boxing Writers Association of America honored Hauser with the Nat Fleischer Award for career excellence in boxing journalism. On June 14, 2020, he will be inducted into the International Boxing Hall of Fame.

[QUOTE=TheMyspaceDayz;20369470]Molina knocks out anyone if he hits them cleanly. What’s funny about that?[/QUOTE] Yep, same as if my Aunt had a set of balls she'd be my Uncle...Danny boy hit Redkach clean, didn't do shet...a JR Welter at that...LMFAO !

[QUOTE=HaymonTheGod;20369249]so a washed up bum like amir does and i leg benavidez does hahahaha .. Crawford the bum beater is addicted to pbc leftovers./.. Running scared from porter after getting dropped by bum machine egis hahaha[/QUOTE] Well, T Craw stopping…

Foook. It feels dirty to agree with Hauser, but yea I agree with Hauser's overall slant. Ivan for sure should be punished. But they went hard as f#ck on this poor dude. Suspend him & take some of his money…

[QUOTE=fight IQ;20369454]This writer is an idiot for being so biased. Just stick to reporting, loser, and let us decide. Redkach got what he deserved. Lot of important veins around the neck. You want to bite, go into street fight, moron.…