Ivan Golub on Training With Lomachenko, Targeting Big Names at 147

Ivan Golub comes from a school of boxing unlike many can imagine. The now Brooklyn based welterweight, who's career is guided by managerial company Split-T management and promoter Lou DiBella, is a product of the famed Ukrainian amateur setup that includes world champions Vasyl Lomachenko, Oleksandr Usyk, Oleksander Gvozdyk, and stablemate Sergiy Dereyvanchenko.

"We would train for two hours in the morning, eat, rest and train again for two hours. Training would always be different and very unique. It was always hard but we would do things like play soccer or tennis to break up the monotony of the intensity of what we were doing. We would do lots of things centered around hand-eye coordination. It was very educational training with them and I am very thankful for those experiences.

"Coming through the Ukrainian boxing system prepared me for life as a professional. The training back then was centered around fundamentals and I feel that schooling is what amateur boxing should be about and it also explains why so many Ukrainian fighters go onto win Olympic medals and world titles in the professional ranks." 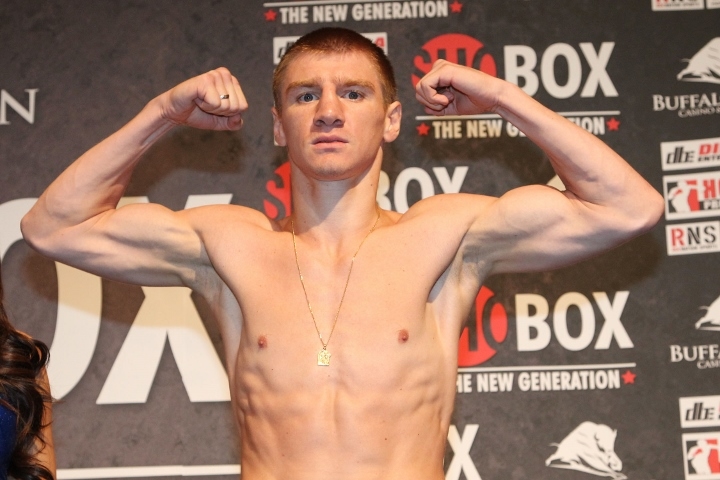 Golub now resides in the fight capital of the world, Brooklyn, New York, and is guided by New York legend, trainer  Andre Rozier. Golub described training with Rozier along with his immediate plans for life within boxing.

The WBC regional titleholder stated, "It wasn't easy moving to Brooklyn but I have to thank Andre Rozier, who I consider a father figure, for helping me settle into the American culture. I have done my best to learn English and my wife has set up a bakery and confectionery business in Brooklyn and we have our son who has grown up here so we are really settled in Brooklyn.

"Andre is an amazing trainer and an amazing man. He has taught me so much not just as a boxer but as a human being. Andre and Gary Stark Sr too along with the rest of Team Havoc, have taken two Ukranian's in myself and Sergiy Derevyanchenko and made real professionals out of us both. I firmly believe we both will become world champions at some point in the near future.

"I am always ready. I have been training with Andre as well as my gym brother Chris, who has been a big help during the quarantine period for training as we live close by to each other, so I am ready for when the phone rings to fight.

Golub continued, outlining his vision for 2020 and beyond.

"I want all the big names at 147. Many people will avoid me because I am Eastern European. It happened to Sergiy until he showed how good he was against Danny Jacobs and Gennadiy Golovkin, now everybody wants to see Sergey fight. I promise everyone this will happen in regards to my own career.

"I want all the big names at 147. I trust my trainer, management, and promoter to get me the right fights, but I am happy to go in with any of the world champions right now. I boxed the best in the world as an amateur, so fighting someone like Terrence Crawford, Errol Spence, Danny Garcia, Shawn Porter, for example, would pose me no problem now. I would be ready."

Golub is the real deal.