Showtime celebrated the brutal and bloody battles between Israel Vazquez and Rafael Marquez over the weekend by airing their first three fights, two of which took place in 2007, and one in 2008.

The epic four-fight bludgeonings between Vazquez and Marquez—which ultimately ceased at a 2-2 stalemate—is regarded as one of boxing’s best rivalries.

Vazquez sits today as a shell of his former self, but he wouldn’t trade any of the debilitating damage his body had to absorb for anything.

The courageous Vazquez is now blind in his right eye as a result of the beatings he took from those fights. However, the former three-time super bantamweight world champion who deals with other recently discovered disorders was still an interested observer from his Huntington Park, Calif. home on Saturday night with his family.

“Of course I watched the fights. We had nothing else to do, and nowhere to go,” Vazquez laughed off in an interview with BoxingScene.com, hinting at his newfound life in self-quarantine due to the coronavirus.

Ten years after his last professional bout, Vazquez, who retired at the age of 33 with a record of 44 wins (32 KOs) and 5 losses, is facing a very different kind of fight.

The 43-year-old Mexican warrior was considering a glass eye at one point after the optic nerve in his eye went dead and robbed him of his vision. Just as he was about to go through with the eye procedure, Vazquez’s body began to diminish physically nearly two years ago.

At the behest of his family, friends and boxing circle, Vazquez underwent testing.to learn why his 145 pound body had withered.

After visiting Dr. Fausto Daniel Garcia at the Hospital Jose Maria Roma in Mexico City, Vazquez was diagnosed with systemic sclerosis (SSc), a rare chronic autoimmune rheumatic disorder that causes degenerative changes to internal organs, as well as the skin.

“It will be a chronic disease that I will have to live with for the rest of my life. There is no treatment to cure it, although it is controlled now,” said Vazquez. “Since the illness affects the muscles, I can’t gain weight. But thankfully, it’s not a life-threatening illness. If I take care of it and be responsible with it, it can be tamed.”

One year ago, with the encouragement and financial support of the WBC and its president Mauricio Sulaimán, Vazquez made the trip to Mexico for testing and learned he had the ailment. Vazquez said he wasn’t taking his condition too seriously until he went through testing and received a diagnosis.

“The WBC took the lead in overseeing my path to recovery and treatment,” said Vazquez, a former multiple time WBC crownholder who also received full treatments for his eye years ago courtesy of the sanctioning body. “They are handling the expenses, and I’m grateful to them for their assistance in controlling the illness.” 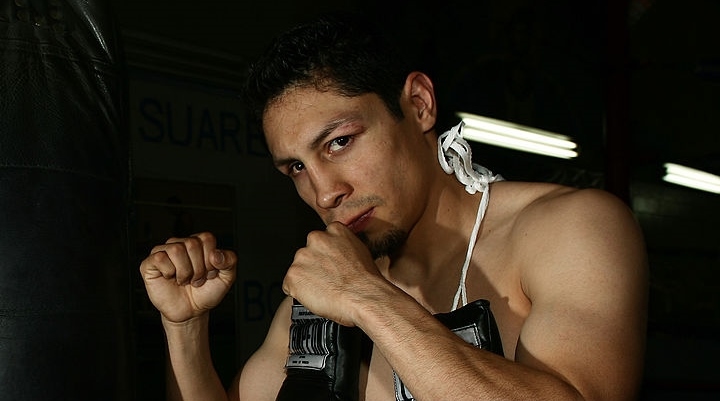 Vazquez now makes a trip to Mexico for treatment once every six weeks. He’s been told by doctors that the disease is not hereditary, and it won’t affect his 17, 14 and 7 year old children.

“Once we found out Israel had fallen into difficult times and was beginning to look frail, we brought him to Mexico for a battery of examinations,” said Sulaimán. “We feel that he’s one of the nicest and most special fighters who gave his life to the sport. His fights with Marquez took everything out of him.

“Israel never asked for our help, or for one penny. We offered it to him—all we could do is act in kindness. We actually had to trick him [with a different scenario] for him to come to Mexico and see the doctors. He is so proud and humble that he would never take advantage of anything. My father Jose Sulaimán always instructed and instilled in me that everything is for the fighter, before, during and after the championship years. We will always support Israel as much as possible.”

No correlation has been communicated to Vazquez by doctors that the beatings he took as a boxer caused systemic sclerosis.

Although he’s still respected and admired for his wars in the ring, Vazquez’s job opportunities are limited, and his meager income has forced him to deal with difficult financial times.

His means of making money have been reduced because the boxing gym he would manage is no longer physically feasible, especially during a time when all non-essential businesses have stalled in California due to coronavirus. Vazquez periodically serves as a boxing analyst for World Class Boxing on LATV with his longtime friend Fernando Paramo, the CEO of the television series.

“I don’t make the same money now, but I’m surviving. I was never a big spender, so I’m able to live a nice life,” said Vazquez. “I’m still very optimistic. I do the best that I can with what I have.”

Vazquez’s weakened physical state has limited any kind of training and running that he would previously partake in—a stark contrast to what replayed on screen over the weekend versus Marquez showcasing his heart, grit, desire and determination.

Marquez won the first fight with a seventh round stoppage because Vazquez couldn’t breathe as a result of a broken nose. Vazquez won the next two bouts, the first via sixth round TKO and the third via split decision. The pair fought for a fourth time in 2010, Vazquez’s last fight as a pro, but the sizzle that preceded in the first three fights was reduced to a fizzle as the fight ended in just three rounds because Vazquez’s tattered right eye could no longer withstand leather.

Vazquez, who was trained separately in his career by the late Rudy Perez and Freddie Roach, always had a history of getting his eyes split open in fights. So much so, that his manager, Frank Espinoza, who discovered Vazquez in Mexico in 1998 and presided over his career until retirement, made sure that Vazquez had two cutman—one for each eye—in the final fights of his career. Vazquez’s problematic right eye split open in the second round of the third fight with Marquez.

“I was so happy to be a part of his career. He was a humble man outside of the ring, but was an animal and warrior inside of the ring,” said Espinoza. “Israel produced one of the top five fight series in boxing history. Each round and each fight just kept getting better and better all the way through. They were two hellacious Mexican warriors. Nobody ever took a step back. It was special.”

The wars against Marquez introduced Vazquez to the world. Being blind ended up being a business decision, but systemic sclerosis is the sucker punch he never envisioned.

“I only look at my eye injury as an accident. It made it more interesting for the people. It brought drama and awareness to our fights,” said Vazquez. “I had a very good career. I put a lot of great effort and dedication into the sport. It was well worth the sacrifices.”