Isaac Dogboe: I Knew All Along It Would Be a Knockout Victory

Philadelphia, PA - In what was a back and forth contest this past weekend inside the Liacouras Center in Philadelphia, Isaac Dogboe from Ghana (19-0, 13 KOs) stopped Jessie Magdaleno of Las Vegas (25-1, 18 KOs) in the 11th round.

Dogboe was dropped in first round but then scored a knockdown of his own in the fifth round and then dropped Magdaleno twice in the eleventh to earn the stoppage victory.

Dogboe won the WBO world junior featherweight title with the victory and always had confidence in the stoppage victory. 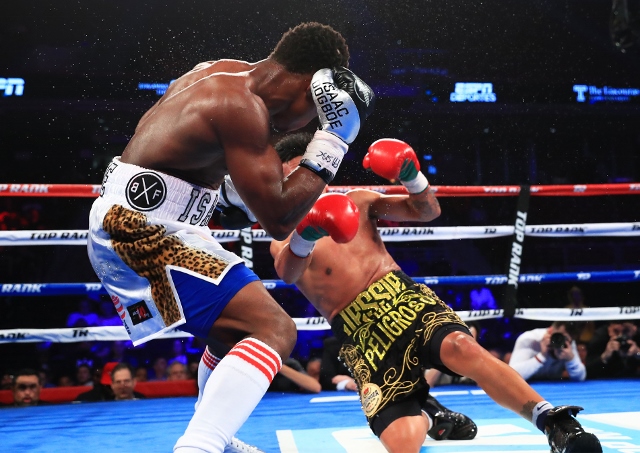 “I keep saying with God all things are possible,” Dogboe told BoxingScene.com.

“I knew coming into this fight it was going to be a knockout victory. It’s been a long road. I went down and it was unbelievable. I didn’t think I’d go down. He caught me with a good shot and he got me down and I got up. It’s all a learning experience. I think I came into the fight a bit cold and not warmed up. When I got to the middle rounds. I thought I was ready to take over.”

Dogboe wants to continue in the line of boxers from Ghana who won world titles and take it to the next level.

“It’s been long road,” said a happy Dogboe. “It means a lot because after twenty something years, there hasn’t been a credible world champion in Ghana. We are taking from where Azuhmah Nelson leftoff and we’re going to take it to the next level. We want to shake up the division and unify the division to do bigger and better things. My father said I haven’t even got my man strength so I can’t wait to get that.”

The eleventh round was a high octane stanza where Dogboe for the better of Magdaleno and he felt it was only a matter of time before he got his knockout victory.

“The first knockdown was so fast and it was like a flash in the eleventh round,” explained Dogboe. “You know, my father keep telling me to relax and move him to the left and come over the top. I just had to calm down and relax. Getting to the later rounds, I know he felt me coming on strong.”

Dogboe hopes to return to Philadelphia as he grew great affection for the city and even joked about someone getting him the Philly staple, cheesesteak.

“I’m going to move to Philadelphia and I loved the place and I just want someone to point me to the best cheesesteak area before I leave Monday.”

after defending the title once or twice, I expect Dogboe to seek unification.