Naoya Inoue and Jason Moloney both did their job at the scale to provide viewers with a Halloween treat in the ring.

The pair of bantamweights made weight ahead of their unified bantamweight title fight, which airs live Saturday evening on ESPN+ from The Bubble at MGM Grand in Las Vegas.

Inoue hit the scale at a ripped and ready 117.7 pounds for his first career fight in Vegas and just second overall in the United States. The 27-year old from Yokohama, Japan previously traveled abroad for a 6th round stoppage of Antonio Nieves in their September 2017 clash in Carson, California. 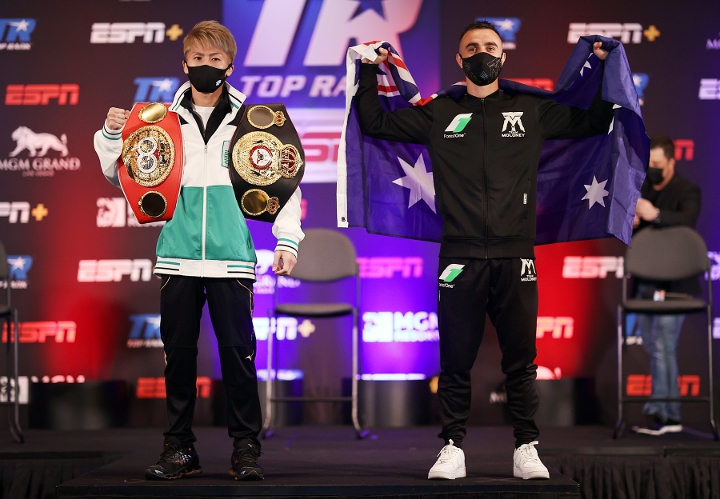 Moloney (21-1, 18KO) checked in at 117.9 pounds for his second straight fight at this venue, having visited The Bubble for a 7th round knockout of Leonardo Baez in June. The 29-year old from Kingscliff, Australia carries a four-fight win streak—all inside the distance—ahead of his second career title fight. Moloney came up just short in an October 2018 split decision to then-unbeaten titlist Emmanuel Rodriguez in Orlando, Florida.

The loss to Rodriguez came during the quarterfinal round of the World Boxing Super Series bantamweight tournament, which Inoue (19-0, 16KOs) won outright. The three-division and reigning unified 118-pound titlist scored a 1st round knockout of Juan Carlos Payano and a 2nd round stoppage of Rodriguez to storm into the finals, where he outpointed Nonito Donaire over 12 rounds last November. The WBSS finale was voted 2019 Fight of the Year by the Boxing Writers Association of America.

Warsaw’s Brodnicka (19-0, 2KOs) weighed 130.9 pounds for her first career fight outside of her native Poland.  The long-reigning titlist will have to lose 0.9 pounds to avoid having to vacate her title at the scale.

Mayer—a 2016 U.S. Olympian from Los Angeles who now lives and trains in Colorado Springs—clocked in at 129.8 pounds for her first shot at a major title.

I expect a rough fight for both men. Moloney is bigger, he is coming for a win and he's a tough guy. Naoya's eye injury should force him to be more careful Inoue by UD 116-112