Inoue Admits He Punished Rodriguez Over Incident With Father

On Tuesday, the Japanese sensation Naoya "Monster" Inoue (18-0, 16 KOs) triumphantly returned to Japan at Haneda international airport in Tokyo after having an explosive victory in the semi-finals of the World Boxing Super Series bantamweight tournament.

Last Saturday at the SSE Hydro in Glasgow, Inoue blew away undefeated Emmanuel Rodriguez in two rounds to win the IBF bantamweight crown.

He now faces WBA champion Nonito Donaire in the final round of the WBSS tournament. 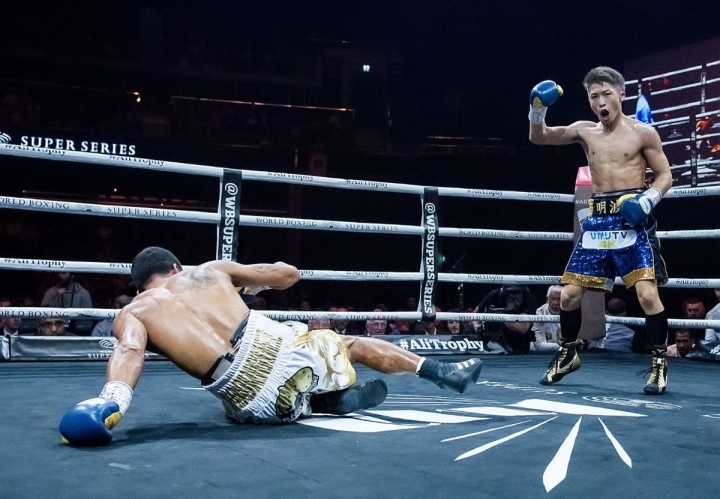 When Inoue arrived in Japan, over 300 people including journalists thronged with loud cheers all ove rthe airport/

The boxer says there was no damage sustained during the contest.

"The first thing I want to do now is have a good rest here in Japan, surrounded by my family," Inoue said.

"I did not suffer anything physically in my fight with Emmanuel Rodriguez. Right now there are no problems or injuries on my body. The fight was over faster than I imagined. But what concerned me was the performance in the fight, I give myself a score of 100."

During the pre-fight media events, there was a confrontation during the public training sessions - which created a lot of tension between the two teams.

Shingo Inoue, father and coach of Naoya, was using hiss smartphone to take pictures while Rodriguez was doing his training. Then, Williams Cruz, coach of Rodriguez, suddenly came over and and shoved Shingo Inoue to prevent him from taking further photos.

Naoya Inoue was not present when this happened, but he wanted to do a lot of damage when he entered the ring.

"Truly, this event that happened to my father was an incident that got me angry.... because of the behavior of Puerto Rican coach with no respect for my father. This is the reason why I decided to jump right into the fight to knock Emmanuel Rodriguez out at all costs, to hit him as hard as ever in a vindictive way."

Nonito will not go there because he is a gentleman.

[QUOTE=Squ□redCircle34;19766224]Rodriguez should’ve checked his trainer after that incident [/QUOTE] i get what you what your saying, but on the other hand if you have a long lasting relationship with a trainer he's part of your crew, and if one of…

[QUOTE=Hnnnggg;19771721]Buddy you clearly lack the reading comprehension skills necessary to understand my post. Maybe carefully reread why I’ve stated negative results post fights mean absolutely nothing and why positive results even months before a bout are indicative of attempts to…

[QUOTE=Mexican_Puppet;19771001]Id.iot And he was in 118 in his next fights Of fact. He was clean and in 118 pounds and destroyed easily Arroyo in 4 rounds. And dropped Arroyo like 79 times Makes you wonder...[/QUOTE] The one after he popped…