Don King, may soon be returning to the Democratic Republic of the Congo, formerly known as Zaire.

King signed the Congo’s Ilunga Makabu (26-2), who is the WBC’s number one contender for the vacant cruiserweight championship.

“I have traveled from France, and Makabu from the Congo, to meet here in Florida with Don King,” said co-manager Tarik Saadi.  “I have matched the greatest fighter in the world with the greatest promoter in the world and today, together, we sign for the future of Junior Makabu.”

“I am thrilled at the opportunity to help Ilunga Makabu become a world champion,” said King.  “He’s a very talented fighter, who is most deserving of a shot at the WBC belt and we will do everything to make his championship dream come true. 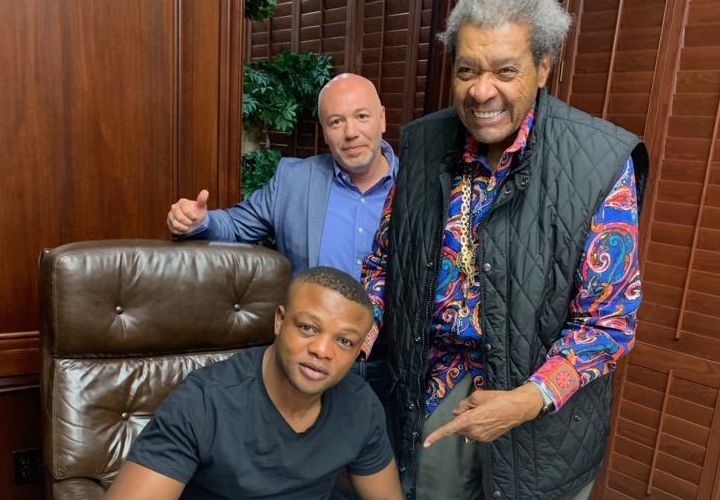 Kazakhstan’s Beibut Shumenov, WBA Cruiserweight Champion will defend his title on the same show which would create great anticipation and excitement for the two winners of the WBA and WBC meeting each other for a unification down the road?

“I’d like to thank one of the most respected fight managers, Lee Holliday, for bringing Makabu and his manager, Tarik Saadi together with us.   We look forward to working with Ferdinand Luyoyo, the President of the Boxing Federation of the Democratic Republic of the Congo.”

“We are very happy to sign with Don King and learn from the best,” said Saadi.  “I am very happy to be in Miami to work together to put Africa and Congo boxing on the world map.”

Makabu has won seven consecutive fights, the last coming Aug. 24, when he earned a majority decision against Aleksei Papin to retain his WBC Silver Cruiserweight title.  He’s scored 24 knockouts in his 26 victories against two losses.   One of his two losses came in a WBC cruiserweight championship bout to Tony Bellew in Liverpool on May 29, 2016.

Poor guy. He must be really desperate to sign with the Devil King. Don isn't even remotely relevant anymore. He can't do anything for your career at this point. Best of luck to Makabu nonetheless.

Anyone remember his fight with Mchunu? Crazy finish

Makabu has improved a lot and is coming off 2 good wins in Russia and has a fan friendly style and just pissed all that away.

They say they are happy now. Give it a year and this tune will change. A lot.