IBF: As Of Now, Joseph Diaz Scheduled To Make Mandatory vs. Rakhimov

Shavkatdzhon Rakhimov was left to feel dejected after a visit to his favorite boxing website drew him to a feature story on Joseph 'JoJo' Diaz Jr. which failed to mention his name.

The disappointment was for good reason, considering he remains Diaz’s mandatory challenger and with a signed order calling for his immediate title shot.

“I don’t understand why the Diaz team is talking about [former 130-pound titlist Tevin] Farmer or [former three-division titlist] Abner Mares,” Rakhimov told BoxingScene.com. “I am ready for the [title] fight. I have been training for this fight for a long time and plan to beat Joseph Diaz in my next fight.” 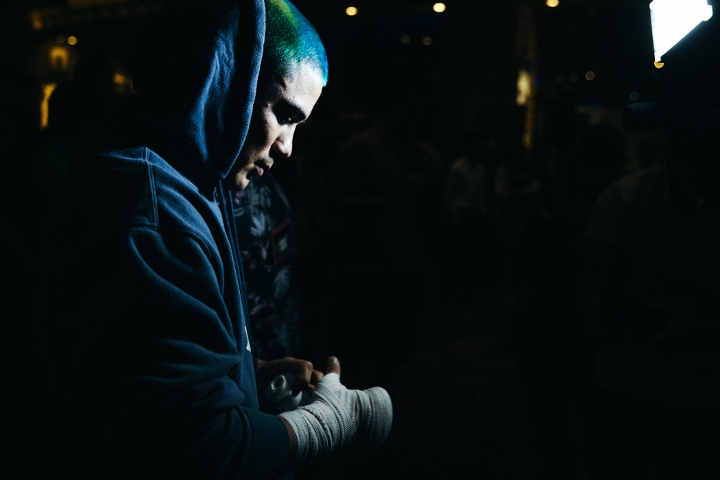 Rakhimov’s road to the number-one spot in the International Boxing Federation (IBF) 130-pound rankings was met with a delay, having scored a dramatic come-from-behind 8th round knockout over Azinga Fuzile in their title eliminator last September on the road in East London, South Africa. The fight was under review for more than four months, with a number of issues were raised including what Fuzile’s team argued was illegal use of a smelling salt by Rakhimov’s corner in between rounds.

The matter was extensively reviewed by a three-person panel appointed by the IBF, who on January 28, 2020 concluded that the original result be upheld. Two days later, the IBF 130-pound title changed hands as Diaz (31-1, 15KOs) soundly outpointed Philadelphia’s Tevin Farmer in Miami, Florida.

Less than two weeks later, the IBF formally ordered a mandatory title fight between Diaz and Rakhimov. The timeline has changed, with the original ruling calling for such a clash to take place by no later than July 30, six months to the day of Diaz’s title win. The ongoing coronavirus disease (COVID-19) pandemic has hindered those plans, with boxing shut down throughout most of the world since mid-March.

What hasn’t changed is the pecking order for the next opponent to face Diaz.

“As of now, Diaz is scheduled to make a [m]andatory defense of his title,” Daryl Peoples, president of the IBF confirmed to BoxingScene.com on Wednesday. “Unfortunately, we can’t determine the exact date of his [m]andatory until we get notification that everyone is going to open up.

“We do expect everyone that is due to fulfill their mandatory obligation as soon as possible.”

Because the fight was formally ordered by the sanctioning body, there exists little to no wiggle room for an optional title defense. Diaz—a 2012 U.S. Olympian from South El Monte, California—can’t even explore the possibility of a unification bout even if such an option were legally on the table. All of the division titlists—Miguel Berchelt (WBC), Jamel Herring (IBF) and Leo Santa Cruz (WBA “Super”)—are currently committed to fights, or at least fight dates for their next respective bouts.

The only out that would allow Diaz to keep his title while facing another opponent is if Rakhimov agrees to step aside. As he and his team tell it, there isn't any chance of that happening.

"Shavkat is hard at work training and awaiting his title fight," German Titov, Rakhimov's promoter told BoxingScene.com. "The IBF ruling was to hold the battle of Diaz-Rakhimov [next]. That will be our next fight—and if Diaz wants to keep his title until then, it will be his next fight as well."

Even if a rematch clause existed in the fight contract between Diaz and Farmer, sanctioning bodies rarely honor such stipulations. The IBF, in particular, has earned a reputation for adhering to its rules more so than any other organization.

“I know that IBF appreciates the hard work of boxers and will not give deferral to Diaz,” believes Rakhimov.  “Diaz has my belt and I honestly deserve my chance to prove it.”

Given the current state of boxing, the price tags for fights like Diaz-Farmer threaten to decrease for the foreseeable future. Such a fight carries even less value without a major title at stake, which presumably would be Diaz’s only option.

“I don’t anticipate allowing any optional bouts in the interim,” notes Peoples. “However, the situation is fluid and we may have to revisit this based on everyone’s individual situation.”

Farmer made back-to-back mandatory defenses in 2019, outpointing Ireland’s Jono Carroll and France’s Guillaume Frenois. Such measures were taken so that he could move forward with a voluntary defense for his first fight of 2020, only to fall flat to Diaz in their DAZN-streamed affair during Super Bowl week in Miami.

The best shot for the Philadelphia-bred southpaw to get back in line would be to land in a final eliminator ordered by the IBF to determine the next mandatory challenger. In the IBF’s aforementioned ruling on Rakhimov-Fuzile, came the consolation prize of Fuzile (14-1, 8KOs)–the IBF #3 contender at 130—being permitted the opportunity to enter an IBF-sanctioned eliminator to challenge for the title in 2021.

[QUOTE=Mammoth;20582835]I think Rahkimov has a decent chance here.[/QUOTE] [QUOTE=Satir;20582893]Rakhimov is not only a little bigger but way better technically, has reacher arsenal, has a good chance to stop Diaz[/QUOTE] I got Diaz all day. Rakhimov doesn’t look that technically skilled…

Diaz wins this fight. Rakhimov nowhere near GRJ speed, but other than that, Jo Jo’s last 3 fights were against Southpaws. That experience is vital. Plus Jo Jo looking WAY MORE SWOLE as he has grown.

Rakhimov is not only a little bigger but way better technically, has reacher arsenal, has a good chance to stop Diaz

[QUOTE=RJJ-94-02=GOAT;20582785]Quite a few people I respect rate this Rakhimov. Can’t say I was very impressed with with him though tbh.[/QUOTE] I think Rahkimov has a decent chance here.

Quite a few people I respect rate this Rakhimov. Can’t say I was very impressed with with him though tbh.